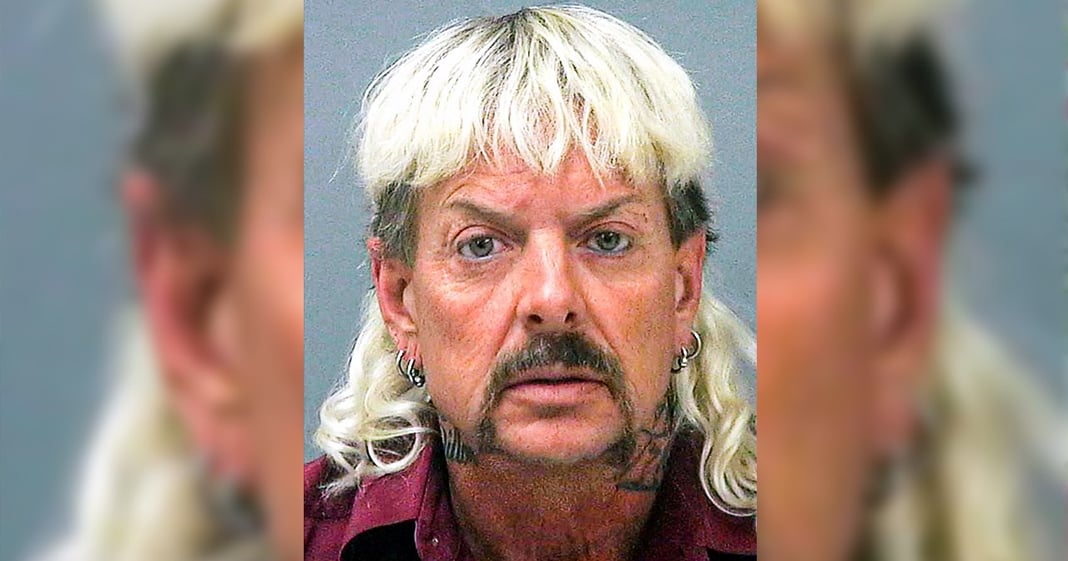 The Netflix documentary series “Tiger King” has proven to be a huge hit for the network, and the subject of the show, a man who calls himself “Joe Exotic”, is currently suing the federal government over his imprisonment. Without giving away too many spoilers, the big cat breeder believes that he was set up by both the federal government and the prosecutors in the case, and he is seeking $94 million in restitution. Ring of Fire’s Farron Cousins explains what’s going on.

In case you’ve been living under a rock for the last couple of weeks, you probably have heard about Netflix’s new documentary series, Tiger King featuring a man by the name of Joe Exotic, better known in the eyes of the law as Joseph Maldonado-Passage. Now, Joseph Maldonado-Passage and this is not a spoiler here, but be careful, spoilers could be coming later on. Was a big cat, breeder, ran a big cat zoo, tigers, jaguars, lions, even had bears and all kinds of other animals. That’s the subject of the documentary and from this point forward, yes folks, there are going to be some spoilers. So if you haven’t seen Tiger King yet, you may want to go ahead and maybe mute it for now and not listen to the rest of it or come back after you’ve watched it. So give you a couple seconds here. Spoilers are coming.

Okay. At this point forward, you have been warned if you’re still watching and have not seen Tiger King here come a couple of spoilers because I have to tell them in order to tell today’s story, here’s the thing. Tiger King was arrested for allegedly hiring somebody to kill a woman by the name of Carol Baskin who runs a big cat rescue down in South Florida. The documentary goes into all of that, but here’s the thing. Joe Exotic three days before this series debuted on Netflix filed a $94 million lawsuit against the federal government. The things he’s suing for false imprisonment, false arrest, discrimination, perjury and entrapment. He is suing the US fish and wildlife service, the us department of the interior, the assistant us attorney who prosecuted him, several witnesses in the case, which includes a man by the name of Jeffrey Lowe who if you’ve seen the series, you know Jeff Lowe is the guy who came in, tried to help Joe by investing big in his park and then ended up taking it from him.

The whole thing is nuts. I mean seriously, if you haven’t seen this yet, you really need to watch it. It is totally worth it. It is absolutely bonkers and that helps explain why Joe Exotic would be suing the federal government. The discrimination claim to me is one of the weirdest ones because he says you discriminated against me when you arrested me because I’m a gay man. Okay. Gay people can still get arrested. Joe, I think you know that like if you commit a crime, it doesn’t matter what your sexuality is, you can still be arrested for it. Now the entrapment, I don’t know man, that one, that one could go either way. Because if you watch this series, it really does seem like they were goading him into getting, hiring somebody I should say to kill and yeah, it does seem like Jeff Lowe was in on that scheme and yet he faced no charges whatsoever.

I’m not saying I have any sympathy for Joe Exotic. The man’s a whack-job he ran for president, ran for governor, knowing he wasn’t knowing, ever wasn’t ever going to, achieve these goals. His campaign manager used to sell them ammo at Walmart. He went in there one day and said, hey, ammo seller, you want to run my campaign for president? That’s how ridiculous this whole story is. But Joe Exotic has always been one who craves publicity. And that is what this lawsuit is about. He is clearly guilty of the things he was accused of, which doesn’t just include, by the way, attempting to hire somebody to murder Carol Baskin. It also includes, you know, breeding of these animals that is forbidden by law, violations of the endangered species act. You know, he allegedly had killed five of these tigers, or as he said, euthanize them by shooting them in the head. So those are some of the other charges. He’s not getting out of this. His lawsuit is going to go nowhere. But I do think there is a lot of merit into really investigating some of the claims that he is making because if you’ve seen the series, you know, yeah, Joe Exotic is guilty as hell. But there’s a lot of other subjects in that documentary who clearly have committed crimes, both recent and not that probably are worth investigating too.