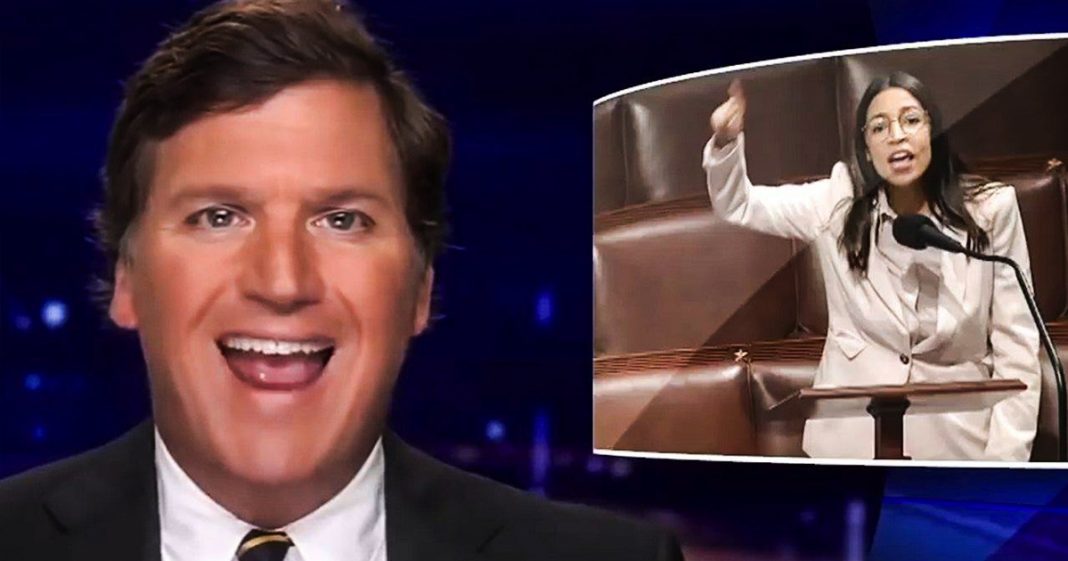 Fox News host Tucker Carlson has never been a fan of people of color, and his latest attacks on both Rep. Alexandria Ocasio-Cortez and undocumented immigrants just further solidifies his status as a bigot. Carlson claims that AOC is the “dumbest member of Congress” and that she “shouldn’t be in” her current position of power or influence because she wants to help undocumented immigrants. Ring of Fire’s Farron Cousins discusses this.

Tucker Carlson has always had a problem with people of color and when it’s a woman of color in a position of power, well that just sets Tucker Carlson off like never before. He recently on his Fox news program decided to single out representative Alexandria Ocasio-Cortez as being according to him, the dumbest member of Congress. Take a look at this really bizarre and to be honest, quite bigoted attack from Tucker Carlson on AOC.

Tucker Carlson: Alexandria Ocasio-Cortez the dumbest, most unhappy member of Congress. Maybe the one person out of 435 who should have no influence on anything and yet still does, has now denounced the stimulus bill because it leaves one group out, illegal aliens. You can’t make it up. Is she really working for the RNC secretly? Probably. But in her view, people with no legal right to be here. People who are filling American jobs, crowding American hospitals, lowering American wages during a brutal unemployment crisis. Good people perhaps, but not Americans, people violating our laws for AOC these people deserve aid just like American citizens, the ones who are hurting and out of work. So what percentage of Americans support that idea?

Now I’m going to address the undocumented immigrant issue in just a moment. But first let’s go ahead and tackle the thing he said about her being the dumbest member of Congress. We shouldn’t listen to her. She shouldn’t even be in a position where we should have to listen to her. Tucker, let me ask you this, bud. Have you ever actually listened to her? Did you listen when she took on the executives from the drug companies where she was able to spout off statistics like it was the alphabet? That’s how well she knew them. This woman has come prepared to every single hearing, to every single floor speech that she has ever given in less than a year and a half. She is one of the most prepared and most intelligent people in the house of representatives and over the weekend, conservatives were up in arms because she was up in arms when she gave her speech.

She was moving her arms a lot and they literally posted videos comparing her to Hitler, saying Hitler also waved his arms around. No, she is passionate. She actually cares about people and she does her homework unlike most members of Congress. She’s not sitting there counting checks from the fossil fuel industry or from the drug companies. She is sitting there researching and learning. That is something we need every single member of Congress to do, but unfortunately, they would rather count their money than actually tackle the issues. Now, as for the undocumented immigrant issue, receiving stimulus checks, right? I can understand why some people would think, well, hold up. Why would we give illegal aliens a check? Well, gee, I don’t know, maybe it’s because they come over here and actually contribute to our economy. We have done countless segments, talked about countless reports and studies that prove that our economy cannot survive without these immigrants coming over here, both legal and illegal.

So Tucker, if you want to get mad about illegal immigrants coming over into this country and working jobs, then you’re directing your anger at the wrong people man. It’s not the fault of the person who comes over here and gets a job. If anything, it would be the fault of the person that gives them the job. Right? You know, how come you never go after the corporations or the companies that hire these people? They know who they’re hiring. They know what their legal status is. But they fudge the paperwork. They look the other way. They give them phony social security numbers so that they can pay taxes, by the way, and you just want to attack those workers who want to nothing more than to come over here and provide a better life for their family. And yeah, maybe they didn’t do it the way they were supposed to, but that’s because this country is a little bit backwards on who we let in and why we let them in.

These aren’t evil people. These are good, hardworking, honest people who are helping to keep our economy going and yeah, they deserve these checks just as much as everybody else does. So Tucker, if you want to get angry, don’t get angry with AOC. Don’t get angry with these undocumented workers. How about you direct your angers towards the corporations who advertise on your program, who are out there hiring these people who you think, as you’ve said, are making America that much dirtier. It’s not their fault. It’s the corporations and the flip side of that is that our economy cannot survive without them.