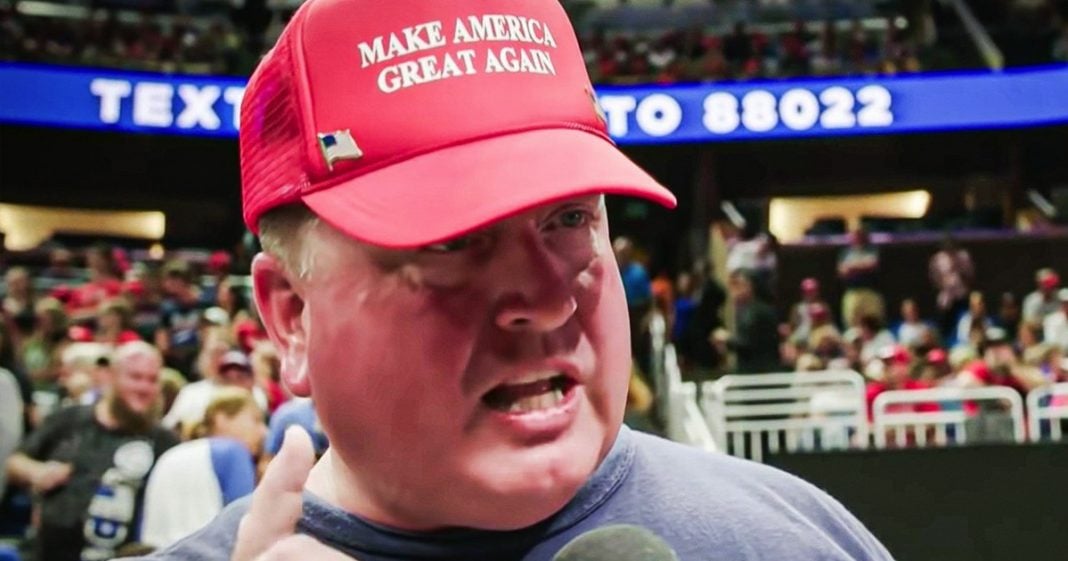 According to reports, some Trump supporters around the country are ignoring pandemic protocols because they want to “trigger” the liberals. These people are putting their lives and the lives of others in danger just because they want to make those on the Left squirm a bit. We’ve seen what happens when people try to make light of the situation, and nearly all of them already regret it, as Ring of Fire’s Farron Cousins explains.

According to a new report in the Atlantic by McKay Coppins, there are actually Trump loving conservatives out there who are breaking pandemic protocols and quarantines because they want to just stick it to the liberals. That is what is happening in red counties and red cities and red States all over the country right now, according to the people that McKay Coppins actually went out and spoke to. They told stories about how they would go to their country clubs and they would shake hands and they would embrace one another and they would share golf carts even though they had specifically been told not to do that because they need to practice social distancing. That was in Georgia in Texas, similar stories. People saying they’re still going out, living their daily lives, ignoring all of the advice because they believe that the liberal media is overhyping this just to hurt Donald Trump. So they really, really just want to stick it to them.

They want to say that, look, I went out and went to the grocery store. I went and walked around the mall for an hour and I didn’t get sick. Look how great and wonderful I am and the liberal media is filled with lies. Now to that point, let me go ahead and say this one more time. In the early days of this, yes, we have been through a lot of pandemics. We have seen the media overhype things that they certainly should not overhype and at first I thought this could have been another one of those situations. But folks, that was two months ago. Okay. In the last two months, a lot has happened. It’s pretty obvious that there is no overhyping by the media here. This is the real deal and I apologize if in the beginning I made it sound like it wasn’t. I was skeptical at first, but I have not been since then. But these folks have taken it to a whole new level.

They know that we have more than 100,000 people in this country that have already tested positive for this. They know that hospitals do not have the gear that they need to be able to treat people. They know that this thing is spreading like wildfire. But they don’t care because they want to stick it to the liberals and we have seen what happens in these situations. Right? When people decide to just ignore the pandemic protocols. You know, all of those spring breakers that came down here to Florida even though they weren’t supposed to, but our Florida governor who’s pretty much useless, decided to let them stay for a week and a half before kicking them out. Yeah, they took the virus back home with them and some of them actually brought it down here with them and helped it spread through Florida and then they went back to their hometowns and allowed it to spread through their hometowns.

You know, the people who tried to say, this isn’t a big deal. Look, I’m going to go out and lick a toilet seat. Honestly that, that’s a thing that happened. Oh, now they’ve got coronavirus. Folks, if you do not take this thing seriously, if you do not practice the social distancing, if you do not adhere to the stay at home orders, you are putting yourself at risk and everybody else that you come into contact with, and I think that’s the problem that conservatives are having right now. They may not care if they get sick, but they don’t care enough about others to prevent them from getting sick. Because you may be a healthy person. You may have no underlying medical conditions. You may think, hey, I can beat this thing if I get it. Well, great for you, but it’s very likely you’re going to come into contact with somebody who can’t.

We have seen relatively healthy people drop dead from this virus. It is not only the people with preexisting conditions. We have to take care of each other at this point, and that is something that conservatives have always struggled to really wrap their heads around. They can’t conceive of taking care of other people, of looking out for somebody that isn’t themself, and that is why they’re out there acting like they’re invincible. They are immune to all of this because they want to trigger the libs. They want to own the liberal media and it’s going to end in disaster.