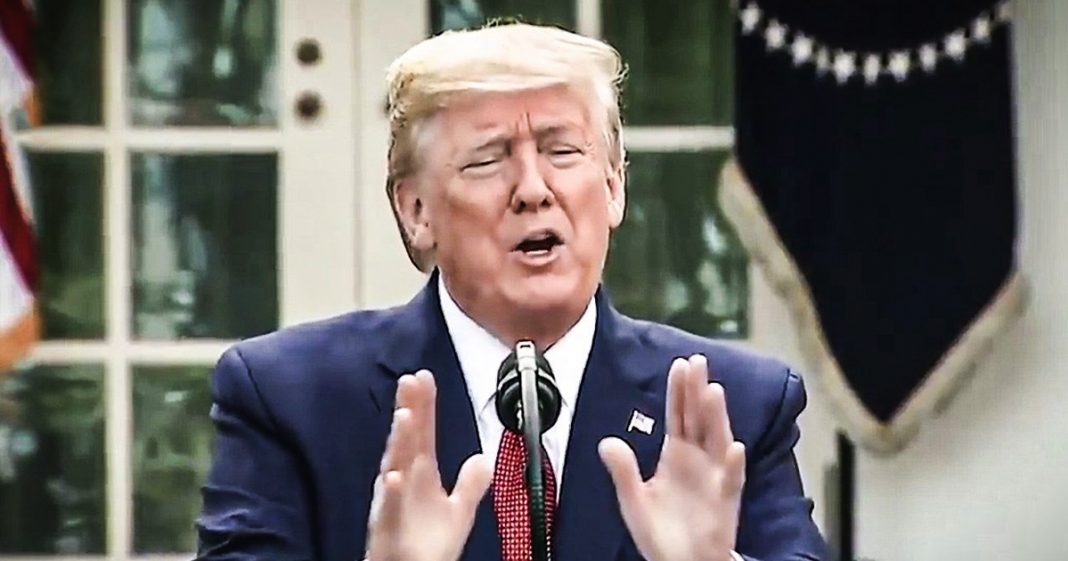 Donald Trump believes he knows why hospitals are running out of supplies – Hospital workers are apparently stealing them. There is absolutely no evidence to back up these ridiculous claims, but that hasn’t stopped Trump in the past. The President is looking for anyone to blame his lackluster response on, even if that means blaming the people on the front lines. Ring of Fire’s Farron Cousins discusses this.

By now, I’m sure everybody realizes that we have a massive shortage of medical supplies here in this country. The state of New York is trying desperately to get their hands on more supplies to control and treat the outbreak that’s happening in their state. They have begged the Trump administration to do something about this, and Trump has given them a little bit, not nearly as much as what they’ve asked for or what they need. But now he’s kind of changed his tune a little bit. You know, it’s not the, because the hospitals are using up all these supplies and they just need more. No, no, no, according to Trump, there’s something more sinister happening at hospitals. Take a look at what the president said on Sunday about where he thinks these supplies are actually going.

Yeah, that’s right. They’re going out the back door. Doctors and nurses and other hospital staffers are just so desperate and have been for years to just have those surgical masks in their home for whatever reason that they’ve just been stealing them and stockpiling them for, for, for really no apparent reason. Right? That’s what’s happening Mr. president? No, what happened is that one, you didn’t take the pandemic seriously enough in the early days and you failed to get the supplies on order. Number two, you failed to use the defense production act to force corporations to start making this much needed medical gear and number three, you took the stocks of what we did have and you sent them to China seven weeks ago and I think that’s probably the biggest factor here and that’s something that too few people actually realize. In the early days of this pandemic when it seemed like China was going to get hit the hardest, the United States in an actual gesture of Goodwill sent a lot of our supplies over there to help them.

Even though we were warned that was probably a bad idea, as good intentioned as it may have been, because this thing is going to come to the United States. It’s already spreading around Asia and Europe. We have to take care of ourselves and we’re going to need these supplies to do it. But Trump who is still looking to cement a trade deal with China, wanted to, you know, grease the wheels a little bit by sending them our masks and our ventilators and our respirators and all of those things that we’re now out of here in the United States. He is responsible for this folks. But he’ll never take the blame for it and that’s why he’s coming up with these crazy conspiracy theories about doctors walking out the back door with a box of masks because yeah, that’s something that well-respected medical professionals apparently do in Donald Trump’s alternate reality.