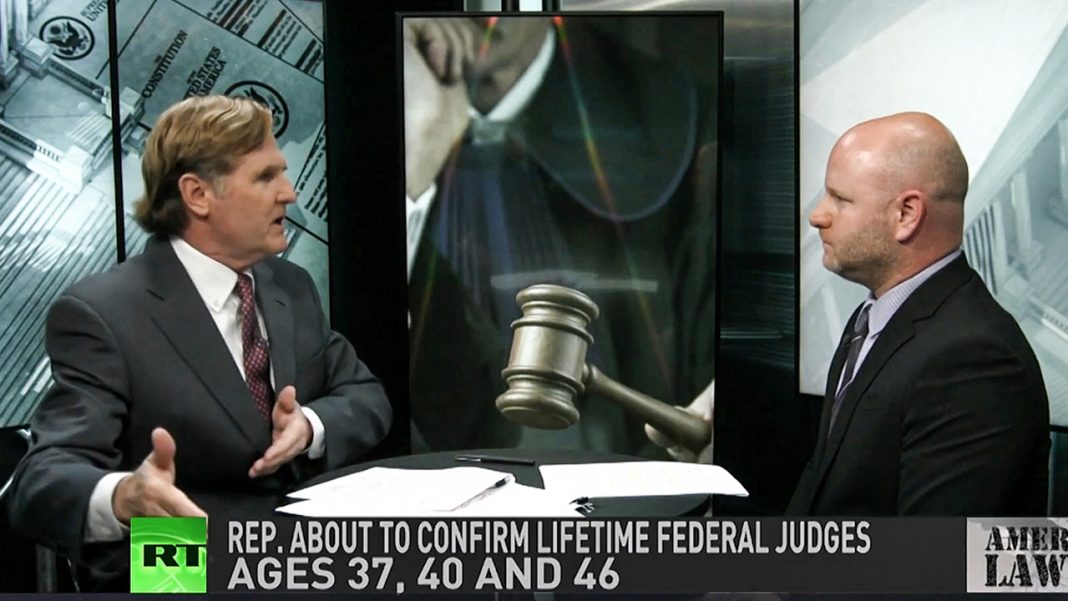 Via America’s Lawyer: Mike Papantonio and Trial Magazine Executive Editor Farron Cousins discuss how President Trump is packing our courts with pro-corporate judges who are young enough to reshape the Judiciary for the next 40 years. Then, RT Correspondent Brigida Santos joins Mike Papantonio to talk about the newly leaked documents that reveal the U.S. government secretly tracking immigration journalists, activists and lawyers.

Mike Papantonio: The pro corporate judges that president Trump keeps putting in the judiciary are getting younger and younger and this means that our judicial branch could be in the hands of corporatists for the next 40 to 50 years. Let me tell you, I saw, of course these stories are so rare because it’s almost as if, I mean this is almost as if media doesn’t understand this whole, they really don’t. You and I have been talking about this story for so long that I, I mean, I can remember 15 years ago us talking about court packings taking place and that all that the, the Liberal Progressive Democrats really cared about were social issues. You know, gender issues, same sex marriage, abortion issues. And while they were paying attention to that, these, these corporatist judges were being appointed. They were typically judges who had worked for corporations for other entire career.

Farron Cousins: Right. We have a lot of judges on the bench right now that are great on social issues, but they also did come from these big corporate defense law firms and they do, Obama appointed one who actually undid his overtime rule that would have given American workers a raise. But this was also a judge that was great on social issues. And now we have these people here. The most reason one Allison Jones Rushing, 36 years old. I mean, one of the youngest ever district judges, she has been confirmed. So you assume good health because it’s going to be a high paying job with great benefits. This woman can now sit on the bench for 40 to 50 years, you know, depending on health and that’s just one. We’ve got Eric Murphy, Chad Readler, 39 years old and 46. So not only do Republicans understand the real powers in the lower courts, but they also understand how are we going to make this our legacy? Well you do that by appointing somebody who’s going to sit on that bench for 30, 40, even 50 years.

Mike Papantonio: The thing is, the pitiful thing is, over, I’ve been practicing for 36 years. I have appeared in some of, in front of some of the best federal court judges ever. Great trial judges. They know how to take an important project and move it down the road and get resolution. But those are the, those are the judges that don’t come in as ideologues. They don’t start off as ideologues. They usually, interestingly enough, they, they’re usually trial lawyers. They start as trial lawyers. They then move to a judgeship. They’re, they’re trial judges, which is big difference. A trial judge is so different than an appellate judge. For example, this Rushing girl that you’re talking to, Rushing woman you’re talking about, I think she’s tried three, three cases to verdict her entire career.

She’s tried nine all together. She’s only handled nine cases and she’s only taken three to verdict. She’s 36 years old. What type of, what type of insight world, what type of world experience does she bring to a courtroom? When I compare her to some of these very, very talented federal judges that I’ve been in front of, they have a life experience. They’ve done something. They’re, they’re, they’re, they’re middle, they’re in their fifties they’ve lived a life. They haven’t been the, the boy for corporate America. They’ve come through this diverse path, but we don’t, we forget the impact that these bad judges have on our entire society and there’s no way, you can’t say, well, they’re going to get, they’re going to get there and that they’re going to change that. That’s not how it works.

Farron Cousins: This is not a job. You learn as you go. You have to know what you’re doing from day one when that first case gets argued in your court. But to me the big issue is that the Democrats, right now, there’s this big discussion, let’s add seats to the supreme court to, to change the balance of power. Once we get a new democratic president and there’s still only talking about SCOTUS. SCOTUS is going to hear a hundred to 150 cases per year. These district courts, where one in six are now a Trump appointee, 7,000 cases a year, and nearly all of those, that’s the final decision. So, so people like Allison Jones Rushing and Eric Murphy and Chad Readler, they’re the final say. Adding three more seats to supreme court, five more seats, 20 seats. It is not going to do anything to fix the problem.

Mike Papantonio: Here’s part of the problem as I look at this, this is a story I, I never go to Huffpost. Huffpost is on my list of places to go for information. Huffpost is always about last, but this is a Huffpost case and story that I took because I wanted to talk about the fact that in the entire story, the discussion is these judges on social issues, on gender, on, on race, on abortion. There’s no discussion. What about this judge where corporate versus consumer, what about this judge, where it comes to worker’s rights versus a corporate interest or corporate interests versus environmental? It’s like the, it’s like these writer’s, progressive’s, not just these writers are hung up on one thing, that it’s all about social issues. Those are important, but when it comes to the, the bottom line is Americans are upset of the judiciary more because they get a bad deal where it comes to things like economic fairness. And, and so, but, but this story is a, is a good indicator of how that happened. Farron, thanks for joining me. We’ll pick up on these stories more next week. Okay.

Mike Papantonio: Newly leaked documents reveal that the US government is secretly tracking immigration journalists, activists and lawyers. RT correspondent Brigida Santos joins me now with the story. Brigida, who leaked the documents and what exactly do those documents expose in this story?

Brigida Santos: Well, the documents were leaked by an anonymous homeland security source to a San Diego based investigative news team. That person remained anonymous because of the sensitive nature of these documents. Now the documents reveal the scope of an intelligence gathering program known as Operation Secure Line, which monitored the migrant caravan and also tracked journalists, organizers, advocates, protestors, and even lawyers whose work focused on immigration issues and the treatment of migrants.

Mike Papantonio: What kind of information, I mean beyond, okay, so we have those kinds of specifics. We understand what, what can be used in that, in that regard. I mean, here, here’s the, here’s the interesting point. When you actually are targeting reporters and advocates and lawyers involved, I mean it’s pretty clear that the constitution, regardless of what the setting is, if it’s conduct by, by an American official, if it is an extension of a policy by the government that leads to these kinds of accusations, it’s pretty serious stuff. Constitutionally, it’s, it’s the kind of thing that actually could land people in jail if it is, if it goes as deep as what I suspect from, from the early signs of this. First of all, this, this is not legal. You would agree with that. What’s your, what’s your take on that?

Brigida Santos: So no, it’s not legal. The American Civil Liberties Union says that it’s unconstitutional for the Department of Homeland Security to single out journalists, advocates and lawyers solely because they’ve spoken out against government immigration policies. While the government may not like this type of speech, as you said, it’s protected under the first amendment. In a statement, the ACLU says the first amendment bars interference with freedom of the press and it doesn’t permit the government to retaliate against people based on their viewpoints. That means the government can’t single people out simply because it disagrees with the messages that they’re conveying.

Mike Papantonio: Yeah. It’s like we have forgotten the Frank Church hearings and now this whole thing is ginning up again, spinning up again in the American public, because again, I, I, you know what I think of corporate media. Corporate media doesn’t connect the dots here at all. They, rather than talking about this as a bigger constitutional problem that keeps ginning up and ginning up more and more while we sit back. It’s like a frog in water that boils it little by little. That’s what’s, that’s where this is headed. And unfortunately, we’re not even teaching civics in school anymore. We’re not teaching this kind of history in school anymore to where a millennial understands that we’ve been through this before and we were so bad, the journalists were physically targeted, lawyers were physically targeted because the federal government thought they had that kind of power. That’s where this is headed. Brigida thank you for joining me. Okay.