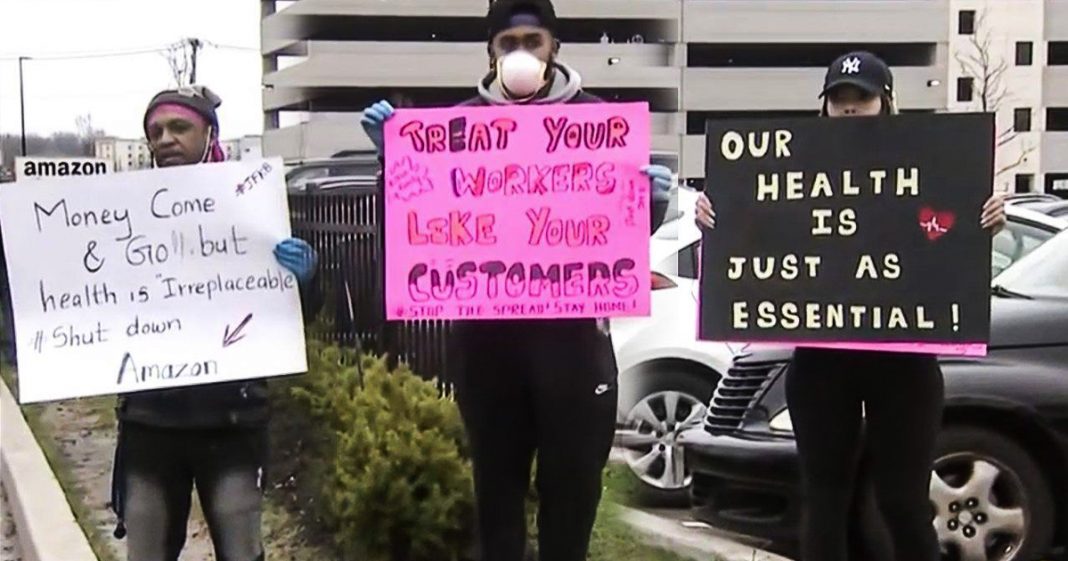 Amazon has fired a group of workers from their Staten Island Warehouse after the workers walked out in protest on Monday. The workers were protesting the unsafe and unhealthy working conditions that they are being forced to live with during the pandemic, but Jeff Bezos and his company had no time to deal with safety concerns or unruly workers. Ring of Fire’s Farron Cousins discusses this abhorrent story.

Yesterday afternoon, workers in a variety of different industries all over the country decided to stage a walkout to protest their organization’s lack of readiness, lack of protection for the workers in the wake of the current pandemic. One of those places where workers decided to walk out to protest the unsafe and unhealthy conditions was at an Amazon warehouse in Staten Island. Several dozen employees, according to the employees themselves walked out late afternoon and then Amazon little later in the afternoon decided to fire these workers for walking out. Except Amazon claims that it’s not because they walked out. It’s not because they organized this strike. No, no, no. You walking out and doing this strike actually violated our pandemic protocols. You know, you guys were too close to one another, so we have to fire you because you didn’t follow our rules. This has nothing to do with you raising awareness about how unsafe our working conditions are.

And that’s all these workers wanted to do. Right now, Amazon workers, just like grocery store workers, they’re struggling to keep up with demand. You know, these workers have all been deemed essential. So even if there are quarantines, even if there are lockdowns, stay at home orders, whatever, these folks still have to go into work because people still need food. People still need goods. People still need items and with everybody staying home too scared to venture out into the grocery stores, Amazon workers have become quite essential to the economy today and these people weren’t mad that they were having to work. They weren’t unhappy that they were having to go in every day while other people got to work from home. All they wanted was for the company to take the pandemic seriously and get them the necessary supplies so that they didn’t risk infection at work and Amazon responded by firing them.

And I’m willing to bet based on what we’ve seen from corporate America for the past 25 years, that this is just the beginning. We’re going to see more firings and worse yet we’re going to see higher rates of infection among these workers whose companies are not taking this issue seriously. Because here’s the problem all the Amazons and other companies out there have right now. The warning flags have been raised. They have been raised by your employees. They have been raised by the media. There is no denying that you knew that conditions were unsafe. There is no denying that you weren’t aware of this. So when the pandemic spreads through your buildings, when your workers start catching this virus, you will have effectively opened yourself up for a massive lawsuit and don’t think that it’s not going to come the first time anyone who works for you who was forced to go in there without the proper equipment test positive for this virus. I can promise you those lawsuits are absolutely getting ready to hit.