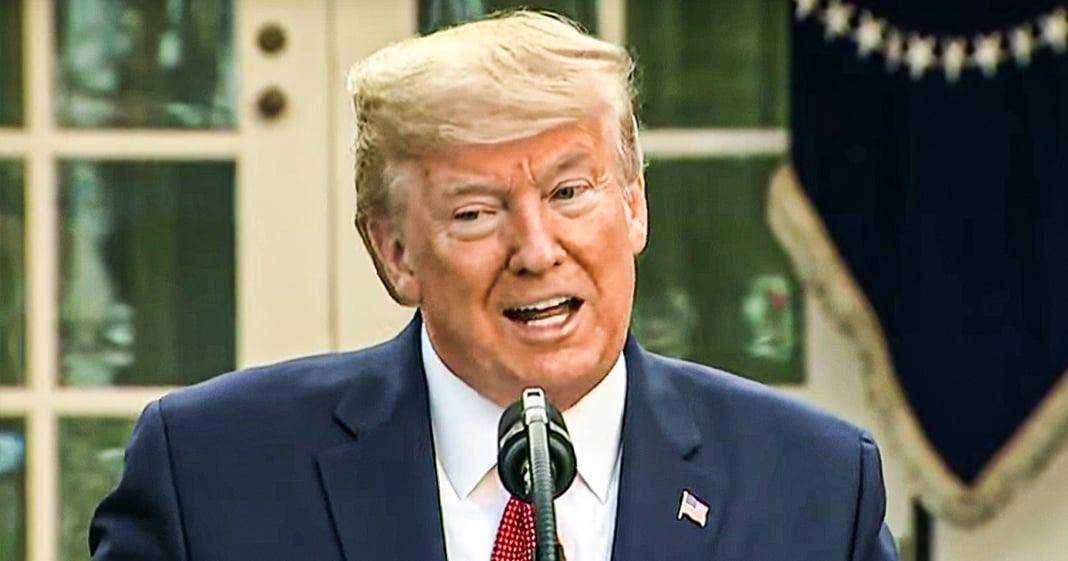 Donald Trump has now officially signed the largest relief package in American history into law, and he wants Americans to know that he’s the one who did it. So rather than having a civil servant disbursement officer sign the stimulus checks to Americans, Donald Trump wants HIS name to appear in the signature section. Ring of Fire’s Farron Cousins explains why the President is making this demand and what it could mean for the election.

So the relief package, the more than $2 trillion relief package has officially been signed by the president. This is happening. We’re bailing out corporations, bailing out failing industries and all of the other companies who mismanaged their own money. And of course American citizens get a one time payment of $1,200 as long as you didn’t make more than $75,000 the year before, or $150,000 as a household. The number goes down after that, up to 99,000 but those are just the intricacies of this that we’ve already discussed. The real issue is that Donald Trump wants everyone to know that he personally is the one giving them this money. And according to reports, he is actually asking that his name, his signature appear on each and every one of these checks that gets mailed out to American citizens. He wants them to open up that check from the federal government and see his name right there on the bottom. And there’s a reason for this folks, this is not just his narcissism coming into play. Yes, that’s part of it. But that’s not the only thing happening here. Donald Trump wants people to know that he did this. He wants them to remember that when they go to cast their ballot this coming November, that Donald Trump personally signed a check for me for $1,200. $1,200 that by the way, is supposed to get you through the next 10 weeks.

That’s all he did for you folks and he thinks you should be grateful for that. He thinks you should reelect him for that. Now, to be perfectly honest, as an electoral strategy, this is actually pretty good. The American public right now is struggling. They need help now more than ever and Congress, the house, the Senate, the president decided, hey, one time payment at 1200 bucks should be plenty for you, but we’re going to give a trillion and a half to corporations. But people may be too distracted with their $1,200 to remember that part of it, but there’s certainly going to remember who gave it to them. They’re not going to remember the 435 members of the house of representatives who passed this. They’re not going to remember the 96 senators out of 100 because four were quarantined, who passed this. No, no, no. They’re just going to remember that Donald Trump gave it to them and they will be more likely to vote for him in November because of it.

See, the Democrats had an opportunity here. They could’ve come out and absolutely demanded $2,000 per month during this pandemic to every single American citizen. They could have used the bully pulpit. They could’ve gotten in front of any camera they wanted to in this country to make that case and let the American public know that they were fighting for more money and more frequent money. But instead they agreed to the onetime payment at 1200 bucks. They put means testing on it and now Donald Trump’s going to get to put his signature on it. They once again lost the messaging battle, went too low, compromised where they should not have compromised and it’s going to cost them. Folks, if you don’t think $1,200 is enough to buy somebody’s vote in this country, you’re kidding yourself. That is absolutely going to sway more people to vote for Donald Trump, because as I said, they’re not going to remember the members of the house who voted for it. They’re not gonna remember the members of the Senate who voted for it. They’re just going to remember that Donald Trump’s name was on the bottom, and that is going to greatly influence the 2020 election in a way that needs to make every single Democrat in this country very nervous.