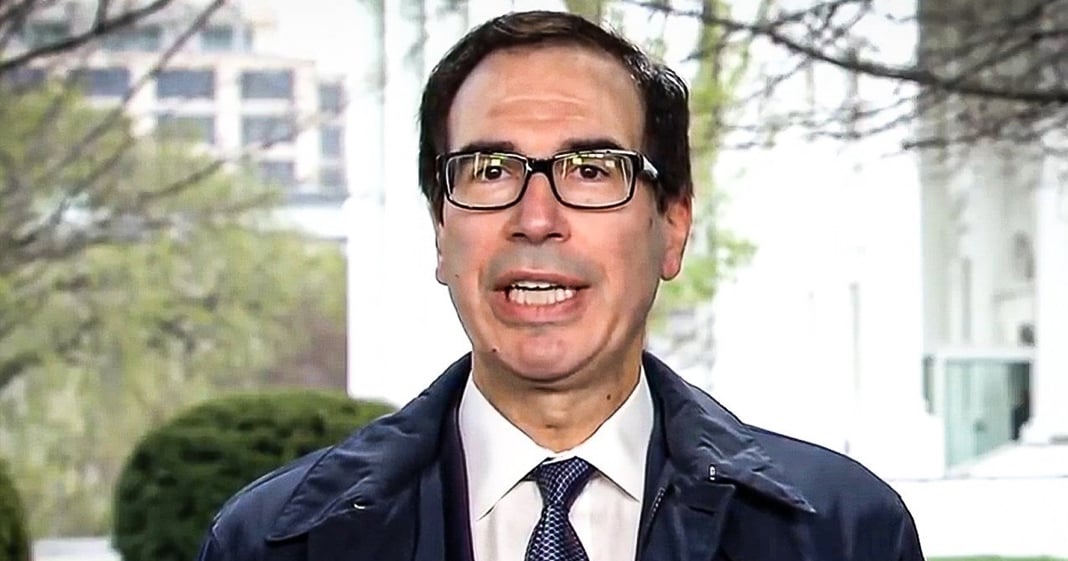 Treasury Secretary Steve Mnuchin appeared on Face the Nation on CBS this past weekend where he said that the pandemic could end by Labor Day,  and that the $1,200 stimulus checks will be enough to keep Americans going for those 10 weeks. This breaks down to $17 per day, and Mnuchin believes that this is more than enough to get you through this crisis. Ring of Fire’s Farron Cousins discusses this.

As Americans salivate over the thought of getting their $1,200 stimulus checks that are supposed to last us for weeks and weeks and weeks and weeks. Members of this administration, including treasury secretary, Steve Mnuchin are out there telling the media that the American public is going to do just fine with all this money that they’re about to pocket. On Sunday Mnuchin appeared on CBS’s face the nation to tell us how grateful we should all be and how this one time payment of $1,200 is definitely going to be enough to get us through the next 10 weeks. Here it is.

Steve Mnuchin: Well, I think the entire package provides economic relief overall for about 10 weeks. Hopefully we’ll kill this virus quicker and, and we won’t need it. But we, we have liquidity to put it into the American economy to support American workers and American business.

Margaret Brennan: So you don’t know if the economy is going to be up and running by Memorial Day, essentially? I mean, are you going to wait that long to come up with a phase four round of stimulus?

Steve Mnuchin: Well, my main focus is now executing. We have everybody within treasury and the administration working around the clock to get this money out quickly. Since this doesn’t do people any good, if it takes a long time. We also have the task force and the medical professionals making recommendations to the president about when they think the economy will be reopened. And if for whatever reason this takes longer then we think, we will go back to Congress and get more support for the American economy. But I hope that’s not needed.

So for anybody who’s already done the math, or I guess I should say for anybody who hasn’t already done the math, let me go ahead and explain it to you. If what Mnuchin is telling us is correct and the economy is essentially going to grind to a halt for the next 10 weeks before picking back up again, that $1,200 split across 10 weeks, which is 70 days comes to $17.14 per day. And Steven Mnuchin thinks that $17.14 for Americans every single day is totally enough for us to live on. I, I don’t need to tell you that that is definitely not enough for us to live on. I think everybody watching this video right now totally understands that. The average family can’t live on $17 a day. Hell, they can’t live on $34 a day, which is what you’d get if you were married and your combined income was under $150,000. $34 a day is a tank of gas.

And if you live in a two provider household, you most likely have two cars. So that’s, you know, two tanks of gas each week. Well, that’s not going to go very far in terms of money. We have kids to feed, we have ourselves to feed. We have bills to pay. $1,200 one time, literally pays my mortgage payment for a month and that’s it. There would literally be $0 left for me and I would still have to pay a couple of cents out of pocket for it and then that money’s gone. So if I had lost my job due to this and my wife had too, and I know that my mortgage payment eats up 100% of that stimulus check. How am I going to pay for power? How am I going to pay for water? Right? I’m not even talking about internet or cable or any of that stuff. I’m just talking about basic necessities that we have to have as human beings to survive. Electricity, water, and yes, electricity is a vital resource, folks.

Food, there is no money left, Steve. We deserve better, but we’re never going to get better if we don’t demand better. And that’s the part that’s on American citizens. With every breath we have, we should be out there telling them this ain’t enough. Go back to the drawing board and get us something better. And if they’re not willing to do it, then guess what? There’s an election coming up in November and anyone, regardless of their party affiliation, who is not willing to do more to help American workers, get rid of them. I don’t care if it’s a Democrat, I don’t care if it’s a Republican. All I see at this point are people who are supposed to be representing us, who are unwilling to help us. This isn’t a Democrat or Republican issue. This isn’t left or right. This isn’t partisan. This is basic decency and humanity, and if they don’t have it, get them out of there in November.