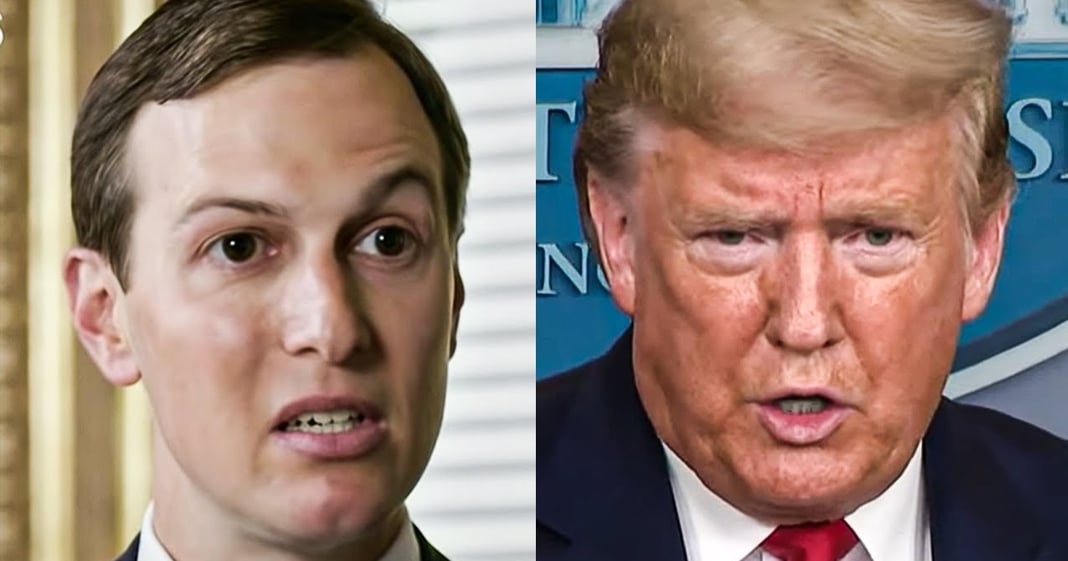 Jared Kushner has now been put in charge of ventilator production within the government, and that’s a good indicator that the country is screwed. Kushner has already failed in his task as the federal government has temporarily backed out of a deal with major producers to make more ventilators because the government wasn’t happy with the costs. Ring of Fire’s Farron Cousins explains what’s happening.

The Trump administration has decided that the best way to provide all of the ventilators that this country is desperately in need of right now is to put Jared Kushner in charge of production. Jared Kushner, Donald Trump’s son in law, who has no business serving in the federal government whatsoever, is now the person in the government in charge of getting companies to go out there and make these much needed ventilators that we have run out of. And how has Jared Kushner handled this job so far? You’re wondering, well, I’m glad you asked because earlier this week FEMA had reached a deal with general electric, I believe it was. General electric or general motors, excuse me, and Ventec Life Systems. They were going to produce 80,000 ventilators and the federal government was going to pay them for it. They’re going to pay $1 billion for 80,000 ventilators. And then Jared Kushner stepped in and said, well, that price is a little high. Don’t you think? Let’s not go through with this deal. I know people are literally dropping dead in this country because we don’t have enough ventilators, but golly, gee, $1 billion, eh.

We just can’t afford that. Let’s go back to the negotiation table and see if we can hammer something out in the next couple of weeks. Yeah. How many people are going to die in the meantime because Jared Kushner didn’t want the federal government to spend $1 billion? We just passed a $2 trillion bailout, and you mean to tell me we couldn’t spare a billion? A billion to make these ventilators. I don’t care if you have to spend $1 billion a day to make ventilators to keep people alive during this pandemic, that would still come out to less than half of what you spend on the military every single day of the year. How’s that for a little perspective for you? That’s what’s happening in this country. We’re spending more than $2 billion every single day of the year, including on holidays on the US military, but we can’t even make a onetime payment of $1 billion to get 80,000 ventilators so people don’t drop dead from this virus that we could be treating?

We could be keeping people alive, but the Trump administration is so inept, they are so incompetent and they are so arrogant that they refuse to take that action. And Jared Kushner has got to be the only person in that white house right now who is dumber than Donald Trump and he is the one who has doomed roughly 80,000 people to an early grave because he didn’t want to spend money that wasn’t even his. Folks, that’s the insane thing about this. We weren’t even saying, Jared, you have to personally fricking pay for these. No, this is the federal government. They, they have $1 billion. Trust me, they do. They can spend it. We’re about to give $500 billion to corporations just because they mismanaged their money. Maybe give them $499 billion and take the $1 billion and spend it on the ventilator. I don’t know. That’s just right off the top of my frigging head. I’m pissed. This is infuriating. It’s infuriating because we’re being governed by morons who have no idea what they’re doing and they’re still willing to put dollars over lives and these aren’t even their dollars.