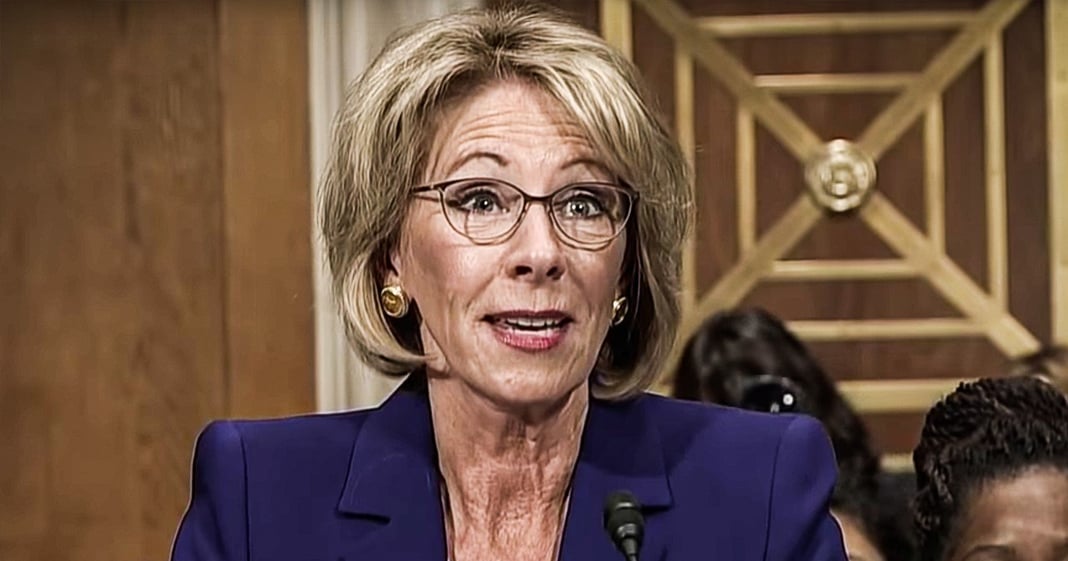 Leaked emails from Fox News show that the network was offering softball questions to Education Secretary Betsy DeVos in exchange for an exclusive interview. They even gave her instructions on how she could pivot away from topics that she didn’t like and promised her the clearance to talk about whatever she wanted to discuss when she pivots. This tells you everything you need to know about access in the media today, as Ring of Fire’s Farron Cousins explains.

Newly released emails, well I can’t even say that they were released, these are newly leaked emails from Fox news shows that the network was actively working with Betsy DeVos’ staff to try to get her to come on the network to do an interview and promising to ask nothing but easy questions of the secretary of education. Here’s the way it all played out. They wanted the Fox news producers wanted Betsy DeVos to come on Maria Bartiromo’s show and in order to do that, they knew that Betsy DeVos was a little skiddish so they sent the following email. They said, remember any questions she doesn’t feel comfortable answering, she can choose to not answer and pivot the topic and Maria is seasoned enough to understand and move on. So no worries on that front. This will be an easy interview and enjoyable and that was from November of 2018. Easy and enjoyable.

And if she doesn’t like something, here’s how you can get around it and Maria is just going to roll with it because she has no standards as a journalist whatsoever. Come on, Betsy, what you’re waiting for? Now, I wish this was the only instance of this, but it’s not. They actually did this with several other Fox news programs and Betsy DeVos where they had to promise, all right Betsy, we’re not going to talk about impeachment. We’re not gonna talk about Mulvaney. We’re not gonna talk about Mueller. We’re not going to talk about anything you don’t want to talk about. There’s going to be no surprise questions. There’s going to be no hard questions. And if there accidentally is one, feel free to just change the subject and we’ll roll right along with it. Now, that happened with other programs specifically with Dana Pereno and that is not where it ends.

There was also an instance where Betsy DeVos’ people reached out to Fox and friends and said, hey, Betsy has a new education initiative that she wants to roll out exclusively on your program in the third hour when you have the most viewers, they said in the email. So what do you say? Let her come out there and use your outlet as pure government propaganda and they were okay with that. And again, this wasn’t the only instance. It goes even deeper because you also had Fox news producers. I got to read some of these. These are absolutely phenomenal. In one email to a USDA staffer, a Fox news producer asked for help finding a pro Trump guest per the email, “we are looking for a dairy farmer who supports president Trump’s advocacy for them and calling out Canada’s protectionist trade policy when it comes to milk.”

Yeah, Fox wanted to get that hard-hitting milk segment out of the way, but they had to have a pro Trumper. Right? A pro Trump milk drinker dairy farmer who also hates Canada and the government. The friggin USDA is the only place they could go to find this. USDA, you got to know somebody who is a pro Trump farmer, they’re a dairy farmer and they hate Canada, but they’re intelligent enough to speak on these issues. My God, that is a litany of requests. But folks, this shows you the incestuous relationship taking place between Fox news and this administration. Yeah, it goes a lot deeper than the president’s son having an affair with a Fox news personality. They’re even more embedded than that if you can imagine, and that’s a disgusting thought, but that’s what’s happening here. Fox news is government propaganda, but of course only when a Republican is sitting in the white house.

This is inexcusable. This needs to be fully investigated, folks, because I guarantee you if you just scratch the surface a little bit, you’re going to find out that this is actually illegal. The government and Fox both need to be stopped in this, and the only way to do that is to take them both to court. Fox news is operating as if it is a government run media outlet, and it’s presenting this information as if it’s their own, as if it’s something they created, something they decided. But the whole network is fake. Everything about it is fake. The outrage is fake. The guests are fake. Everything is staged and it’s staged in coordination with the white house.