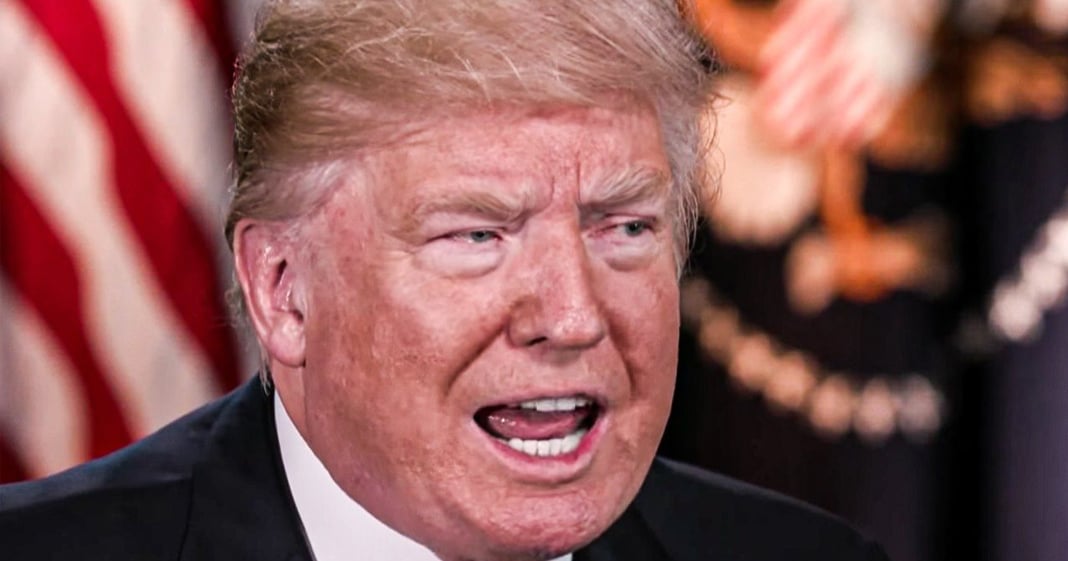 Donald Trump has to face a lawsuit that claims he violated the First Amendment by threatening to pull White House press credentials from outlets that didn’t give him flattering coverage, according to a federal judge. This complaint was originally filed in 2018 and has been slowly making its way through the court system for nearly 2 years. This case could have a huge impact on Trump, as Ring of Fire’s Farron Cousins explains.

Donald Trump is facing yet another lawsuit while serving as president of the United States. This one brought by a group called PEN USA, it’s a literary association, was filed back in 2018. So they’d been fighting this thing for nearly two years through the federal courts and this week a federal judge said, yes, I agree with your complaint. You do have standing and the president will in fact face this lawsuit over allegedly violating the first amendment. Here’s what the complaint says. The complaint says that in November of 2018 Donald Trump retaliated against CNNs Jim Acosta, repealed his white house press credentials only because he was not happy with the coverage that Acosta was giving his administration. Had Acosta played ball, he would not have pulled his press credentials. Trump has also threatened other news outlets and reporters to remove their credentials because they are what he calls fake news because they report about him critically. By threatening to do so, and the judge agreed with this, that is a clear violation of the first amendment.

It is the government, the president of the United States attempting to control the message coming out of the media or else face retaliation. That is illegal. Again, that’s a violation of the constitution and now the president of the United States will have to face a lawsuit for violating the first amendment of the constitution and I agree with this 100%. Donald Trump did do these things. The constitution expressly forbids these things. This is very cut and dry on the surface. Now, once you get into the technicalities of it, once the legal arguments began, it’s probably not going to seem so cut and dry. But just looking at it from the surface, yes, this is a case. This is a strong case brought by PEN USA and that is what the judge told us this week. The federal judge told us this week and in fact this is not the first federal judge to rule on the Acosta issue. Because Acosta actually had his white house press credentials restored after a Donald Trump appointed federal judge said that the president did not have grounds, real grounds, to strip Acosta of his credentials.

Now, this judge this week also did give Donald Trump a minor victory because he said that PEN USA could not include in their lawsuit, Donald Trump’s threats to pull outlets off of the air. And the reason for that, the judge said is because, well, PEN USA, you’re actually not a member of any of these organizations. So you, so you personally don’t have the standing to sue for these issues. That was almost a wink and a nod by the to say, boy, you know, I, I think that’s an argument, but you, you don’t have the standing to do it because you aren’t a part of it. You know, but if, if somebody were from one of those organizations, then, you know, I, I think they got a real case there. So that’s kind of what the judge was trying to say in apparently, obviously not as many words. But yeah, the president’s gonna face this lawsuit and hopefully once he does and once he loses, he will stop threatening media outlets. I don’t think it will happen, but he needs to be put on notice that if he fails in this lawsuit, any threat he ever issues against a media outlet is once again immediately going to get him hit with another lawsuit.