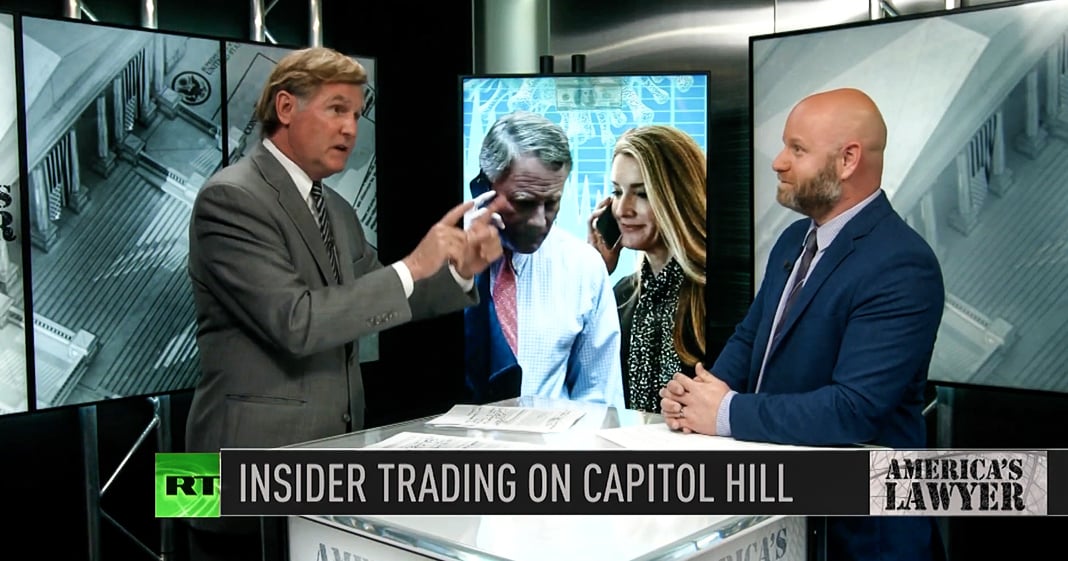 Via America’s Lawyer: U.S. senators were found to be selling off stocks in DROVES using apparent insider trading techniques to ‘get out’ before the Coronavirus decimated Wall Street. Mike Papantonio and Farron cousins discuss.

Mike Papantonio: Several senators are in trouble after it was revealed that they sold off millions in stock after clearly being warned about the looming pandemic all the way back in January. This might, if I’m to vote ugly story of the day, this is it. This is where you had Feinstein. It’s, it’s Democrats and Republican. You have Feinstein, you have Richard Burr, you had Kelly Loeffler. Pick it up from there and we’ll, we’ll add, we’ll fill this in.

Farron Cousins: Yeah, you had Inhofe is in there too.

Farron Cousins: But what, it’s really disgusting because all of these senators were sitting there in that meeting back in January. The public didn’t even know this thing existed back then. They’re told, here’s a thing, this is gonna hit the United States. It’s going to be horrible. It’s going to be bad for the economy. So these five people, at least that we know of left that meeting, made some phone calls and started dumping all their stock because they knew what was about to happen. And actually as of a Monday, Burr has now been hit with a securities fraud lawsuit over his role. I hope, hope we see more than this and it can’t just be we’re suing you for money. There has to be criminal charges because Loeffler she’s the worst of all. Because not only did she sell her stock, but she also purchased stock in telecommunications companies that would benefit from people having to work from home.

Farron Cousins: She knew what was coming.

Mike Papantonio: Yeah, and here’s, here’s, here’s the point to all this. The point is that we’re talking about January, we’re talking about January 24th when the information starts disseminating. What I thought was most interesting is Burr asked for top secret meetings from the health and education committee and he, so these top secret meetings take place. The next thing you know, within a month, within a matter of actually two weeks, he’s out getting ready rid of stock. Now, the Loeffler story is even more intriguing and more disgusting because Loeffler’s hubby runs the New York stock exchange. He’s the guy in charge of New York stock exchange. And so she, so she says, well, gee whiz, he didn’t have anything to do with this. I didn’t have anything to do with selling this, selling any of this. This was our advisor, our financial advisor. No, it’s just not sellable is it?

Farron Cousins: No, absolutely not. I, it’s very clear what happened. She, the richest member of the Senate, by the way, over 500 million in net worth.

Farron Cousins: Probably goes home or even after the meeting makes a call to Jeff Sprecher who is the CEO of the Intercontinental Exchange, which owns the New York stock exchange and says, listen, bad things on the horizon. So in this same timeframe where she’s dumping stock and Burr and Feinstein are dumping stock, Sprecher starts dumping stock, millions of dollars worth of stock.

Farron Cousins: Right, and so he saves money, he saves the ICE Intercontinental exchange money, and there is no way that he just has such good timing that he knew to do that. No, his wife was on the committee, she was warned. This is full blown criminal activity at the head of the New York stock exchange.

Mike Papantonio: Yeah. So, okay. So right now you say, well, they’re under invest. How about Feinstein? Don’t forget Feinstein.

Mike Papantonio: Understand Feinstein goes, if you’ll remember, we did stories on Feinstein all the way back to the Iraq war. Remember the conflict hubby had.

Mike Papantonio: And she’s making decisions that are putting billions of dollars in hubby’s companies. And so at some point don’t you say, okay, you got a perp walk them. And the problem is, it’s what we talk about all the time. Why in the hell can’t we perp walk somebody who’s dressed up in a suit? We perp walk everybody else. Why can’t we purport corporations when a corporation makes a decision to kill people with a defective product? Or when, when they get in, when they engaged in destroying an entire ecosystem and leaving children and families with cancer. Why can’t we say we got to put them in jail just like everybody else? This is a great example. This is one you really want to take a look at as it develops.

Farron Cousins: Yeah, and look, we five of them that we know of, five and this story is still developing. I have no doubt as this goes forward, we’re going to find a lot more of them. And again, these are only five in the Senate. God only knows what’s happened in the house of representatives. Once their financial statements come out, we’ll be able to take a look and the good folks at, you know, ProPublica, who did a great job with this. Daily Beast did a good job with it. They’re going to look into this and we will have more names and we’ll talk about them here.

Mike Papantonio: Yeah, and the trick is to be tri, don’t be tribal about it. Put on blinders. If it’s Democrat then fine, you got to deal with a Democrat. Same way, deal with Republican, vice versa. That’s the only way you’re going to change any of this type of culture in that congressional bubble that exists in Washington DC. Thanks for joining me. Okay.