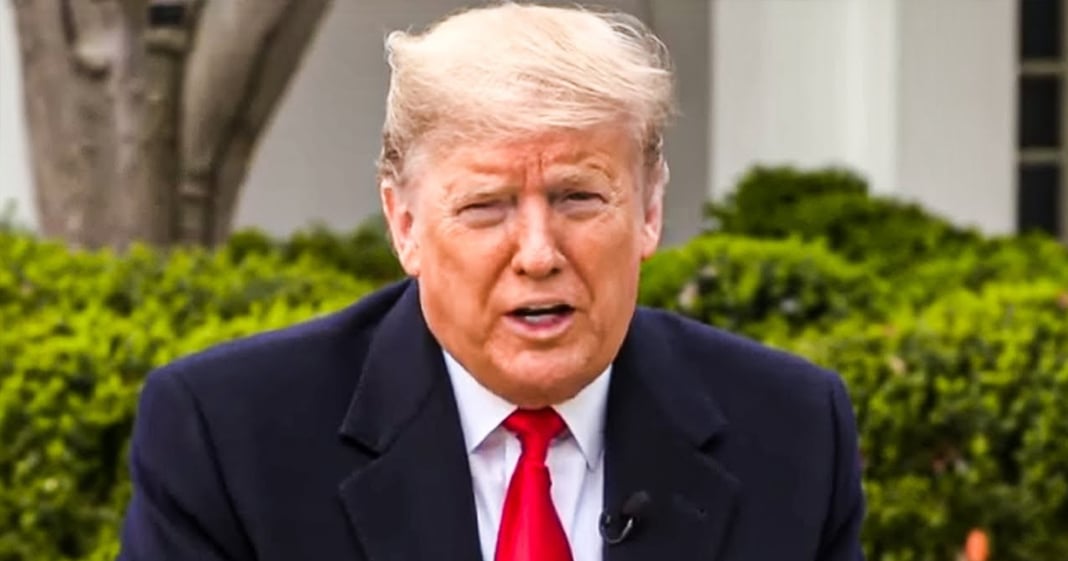 During a virtual townhall on Fox News this week, Donald Trump claimed that if state governor’s want his help, it is “a two-way street.” It isn’t exactly clear what this means, but it is likely that Trump wants state governors to fall in line and either blindly support him or offer unending praise during this crisis. The President is delusional, and his arrogance and narcissism is going to get more people killed. Ring of Fire’s Farron Cousins discusses this.

Earlier this week during a Fox news virtual town hall from the white house rose garden, Donald Trump actually suggested that if States out there in this country want to get any help from the federal government during this time of crisis, then they need to play ball. They need to praise him. They need to thank him. They need to publicly support him because as the president said himself, this is a two way street. Here is his exact quote. It’s a two way street. They have to treat us well, also. They can’t say, oh gee, we should get this. We should get that. Actually they can. You see Donald, you’re the president of the United States. States being plural, States being inclusive, all of them, every single one of them. The red States, the blue States, the swing States, the Democratic controlled States, the Republican controlled States.

You’re the president of all of them, and it doesn’t matter if a governor or if a city mayor comes out and says, Donald Trump is a total moron and I hate him. You’re still obligated as president to help that person out. That’s just how it works. You don’t get to pick and choose and no, it is not a two way street. They don’t owe you anything, but you as president of the United States do in fact owe them. Folks, this man’s narcissism and his arrogance is getting people killed. Cuomo up in New York asked for tens of thousands of the masks that doctors need to be able to treat people. Trump sent him 4,000 and is pissed off that he didn’t get the praise that he felt he needed. So he has gone out there publicly attacking Andrew Cuomo. On Wednesday morning, he backtracked on all that said, I’ve never attacked him. I like the guy I do and we’re doing everything we can to help him and he’s been very cooperative.

You do not have to lick the president’s boots in order to get aid from the federal government. That’s not how this works. But unfortunately under Trump, that is how this works. Look at what happened to Puerto Rico after hurricane Maria. Leadership down there wasn’t exactly fond of Donald Trump. So he screwed them over. Is literally, by the way, in a story that nobody seems to be talking about still to this day, withholding the aid that Congress passed for them. I mean the, the idiot got impeached for withholding aid from Ukraine that Congress had passed. He is withholding aid to our own citizens that Congress passed because they weren’t nice to him. California, he withheld FEMA aid after their massive wildfires because the Democratic leadership in that state wasn’t very nice to him. And in this time of crisis, hundreds of people now dying every day. He is willing to withhold aid from certain States if they don’t kiss his ass. That’s what this man is all about. He is going to get people killed because his narcissism won’t let him help people who may not happen to like him.