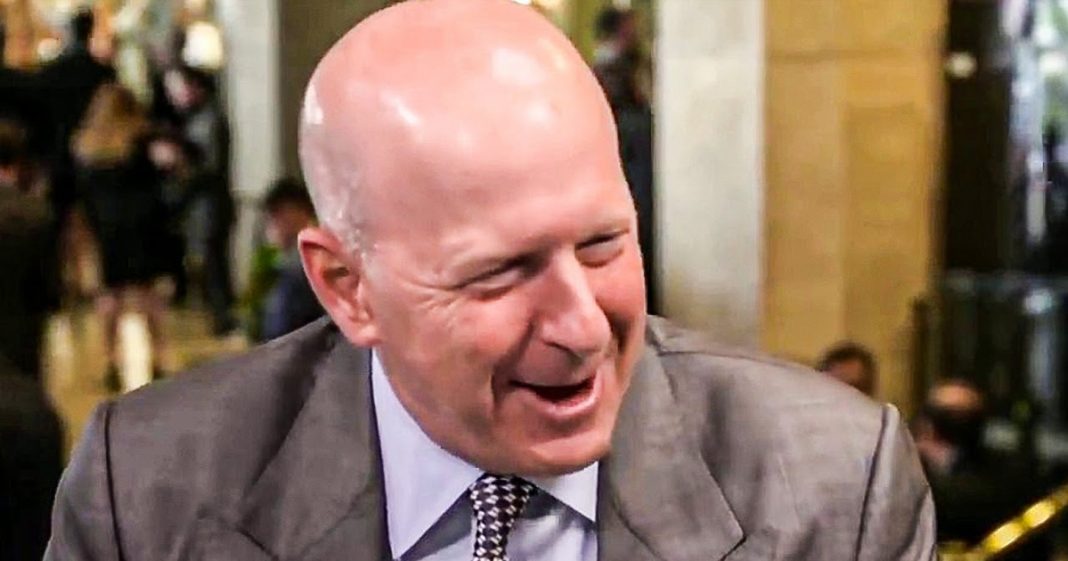 The CEO of Goldman Sachs, David Solomon, has been gifted with a 20% pay increase for his performance last year, bringing his total compensation to more than $27 million, even as the company reported a four-year dip in profits. So the company is doing worse, but the CEO still got millions of dollars in raise money? Not to mention the fact that they company is just one of many who are now asking the government to help them out as the economy tanks. Ring of Fire’s Farron Cousins discusses this.

As corporations in the United States line up to beg Congress for another bailout because they mismanaged their money and weren’t prepared for a crisis. Goldman Sachs, who by the way, is kind of lined up to get lots of money from the federal government if they do enact corporate bailouts. Goldman Sachs, it was revealed recently, gave their CEO David Solomon, a 20% pay raise for the year 2019 bringing his total amount of compensation and assets and cash to $27.5 million. That was David Solomon’s, CEO of Goldman Sachs, pay for one single year. Now, still not quite as much money as Lloyd Blankfein got in the year 2008 as the economy was tanking, he got $41 million when he was CEO of Goldman Sachs that year. But Hey Solomon, 27 and a half million. Still can’t be mad about that, right? Now, what’s interesting about that, as I mentioned, we have corporations, which includes many of the large banks in the United States lining up for bailouts.

We also have the federal reserve making money and capital available to these big banks, including Goldman Sachs, so they’re gonna weather this crisis just fine. They’re going to be perfectly fine. In fact, they’re probably going to profit off of it because of all the money the fed is giving them. But what’s interesting about the Goldman Sachs case is not just that this man received an absorbent, exorbitant, excuse me, salary, it’s the fact that profits at Goldman Sachs last year actually hit a four year low. Profits were so bad they had to cut bonuses for average employees. They didn’t have to. They chose to so that they could give their idiot CEO more money. Four year low in profits and he gets a 20% raise. Everybody else gets screwed because you got to send all that money to the top. Right? David Solomon really, really needed that 20% pay increase even though apparently he isn’t very good at running a company.

This is insanity, but this is also exactly how American capitalism works. People like David Solomon have just continued to fail upwards throughout their entire life. Much like Donald Trump, much like George W. Bush, these people fail at everything they try and yet somehow keep moving on, keep getting better positions. I got to tell you, if I worked at a company and I drove our profits to a four year low, I don’t think I’d be getting a raise at all, let alone a 20% raise and a 27 and a half million dollar payday at the end of the year. That’s nuts, and it’s even more nuts that this company is right there with all of the other corporations lining up for yet another government handout, because apparently the 10 billion that Goldman got after the 2008 financial crisis from the federal government. Yeah, apparently that 10 billion wasn’t enough and it never will be. Greed is what these people peddle in. They’re not bankers. They’re fraudsters and we need to start treating them as such.