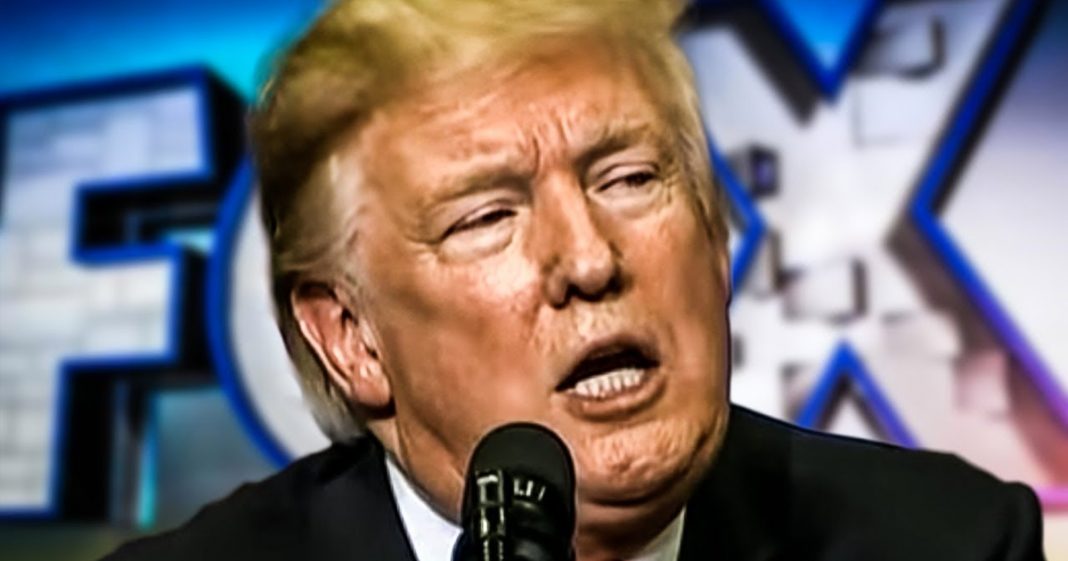 Donald Trump began his week with an early morning tweetstorm that was related to something that he saw on Fox News. This network has absolutely rotted the few salvageable parts of Trump’s brain to the point of being useless, and this isn’t the only time where this has been evident. The President was prepared to launch a missile strike a few years ago in the Middle East after watching a documentary on Fox without realizing that it wasn’t a current events program. Ring of Fire’s Farron Cousins explains how Fox has ruined Trump’s, and millions of other citizens’, capacity for rational thinking.

Donald Trump began his week this week with an early morning, I’m talking before the sun even came up, Twitter rant after he watched Fox news. Fox news host, Steve Hilton at the time was talking about the fact that poverty kills, despair kills. If we shut down the entire economy, people are going to die. If States go into lockdown, people are going to die and we can’t do that to stop the spread of the pandemic because people are going to die. And so Trump took to Twitter and one of the tweets he sent out said, we cannot let the cure be worse than the problem itself. At the end of the 15 day period, we will make a decision as to which way we want to go. Now, most people weren’t exactly clear about what this meant until a lot of journalists out there pointed and folks from media matter pointed out that, hey, this was based on some crazy thing he saw on Fox news from some nut job who somehow has a show on Fox news.

And that led me to this conclusion. Fox news has rotted the president’s brain. And I’m sure people are already getting ready to comment right now, like the president’s brain was already rotted. I, I get that folks, you, you don’t need to say that. But here’s the thing. At some point in his life, Donald Trump was not completely insane, but now he’s totally bonkers. And so what’s happened? What’s happened to this man over the last year, you know, 10, 15 years? You know, during the time when he became a birther. He started going on Fox news. He started tuning into Fox news all the time. So if Donald Trump, at any point in his life, had had a fully functional brain, Fox news destroyed what little parts were actually working. And that’s terrifying considering he’s the president of the United States with access to the nuclear codes.

Because let’s also not forget that. What was it, a year or two ago, the president was watching late night Fox news when they showed a documentary about these groups in the Middle East carrying out these attacks. He was ready to order a missile strike at the time because he thought it was current events. He didn’t realize it was a documentary. The president is not well folks, and it’s going to get people killed. And Fox news has destroyed his capacity for rational thinking, critical thinking, just like it has for millions of Americans across this country. Fox news is a cancer on the United States and we have let that cancer go too long without being treated. We have let that cancer work its way into the very lymph nodes that run this country, which is the federal government. That’s what Fox news is, and like a cancer, it’s spreading and it’s destroying everything it touches. And when the president of the United States can’t different, it can’t differentiate between reality and fiction when he can’t differentiate between a Fox news opinion and a matter of fact, that’s a problem for this country. And unfortunately that’s the problem that we are all living with today because Donald Trump has allowed that right wing propaganda network of Fox news to destroy every last brain cell that he had.