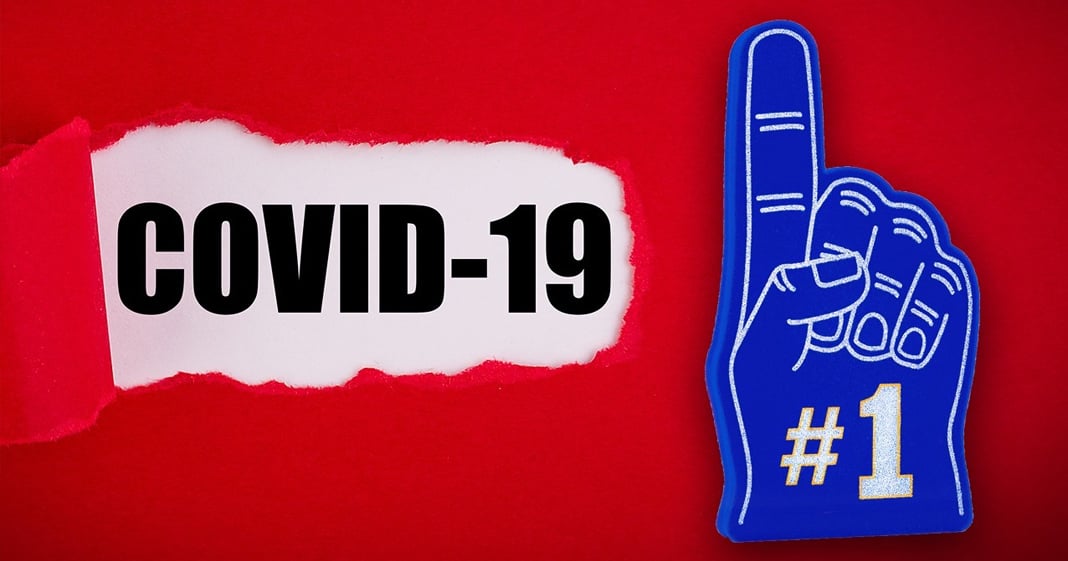 The United States is #1, but in a way that should make anyone proud. We are now the global leader in confirmed Coronavirus cases, surpassing both China and Italy. As the number of confirmed cases continues to rise, we have federal and state leaders – all of them Republicans – who are urging people to risk getting infected by going back to their normal lives. Ring of Fire’s Farron Cousins discusses this.

Well we did in America, we are officially number one, but not in anything that should make anyone in this country proud. We are now officially number one in the world in number of confirmed positive coronavirus cases. More than 80,000 American citizens have now been confirmed to have this virus inside of them and considering the fact that we’re still lagging way far behind the rest of the world in terms of testing, that number is likely far, far higher than just 81,000. We also currently have over 1000 deaths related to this disease. So we’re not quite up to par with the rest of the world in terms of total number of deaths and hopefully we can keep that down. But here’s the thing, the reason the United States is seeing this thing spread, and one of the reasons why we’re seeing more people infected here than other places because let’s not forget, I know, yes, we have a bigger population than Italy or Spain or Iran.

We do not have a bigger population than China, but our number of total positives have outpaced theirs. So what’s the difference? The difference has been the response. Over in China, once they started getting all these positives, once they saw it was spreading, they went through and they traced the sources. They got in contact with everyone who had been in contact with these people and quarantine them, made them stay at home, made them get tested, made them stay in the hospitals. They were able, once they identified it and found out how to trace these sources, contained it. We have not yet done that here in the United States. Italy was forced to go into containment and they were able to get their curve on the downswing. We’re not there yet because we’re not containing it. It is this very unique arrogance that we have as a whole, as a country that is preventing us from taking these measures.

When you have people out there like, like Candace Owens. People on Fox news, Greg Abbott, or excuse me, the Lieutenant governor down there in Texas telling us that it’s our right to go out there and just, you know, live your life as normal. Who cares? Maybe people get sick. Maybe they don’t know. That is uniquely American arrogance right there. You know what folks, we may have to go into lockdown for 14 days to slow the spread of this or hey, maybe even stop the spread of this. Nobody’s giving up their freedoms. There’s nothing in the constitution that says you have a right to go into your office every day. So let’s stop with that nonsensical talk of giving up our freedoms that our, you know, greatest generation fought for. Nobody’s giving up anything. Your first and second, third, fourth, fifth, sixth, seventh, eighth, ninth, tenth amendment freedoms and all of the other ones.

Those are still there. Nothing has changed and there is nothing in any of those amendments about being able to leave your house and go congregate in groups of 30. Sorry, that’s not a real thing. Don’t listen to the conservatives. But until we put in place some kind of action like that, this thing is going to continue to spread. We’re never going to flatten the curve. You have the state of Mississippi that their Republican governor announced, you know what, I’m going to override all of the cities and counties in my state who have put in lockdown orders. I’m getting rid of your lockdown orders. Everybody go back to work. Yeah, can’t wait to see what the infection rate looks like in Mississippi in a week. But that’s Republican government. They want to make Donald Trump happy. He wants the country to go back to work. So Mississippi says, sorry everybody.

Lot of you probably gonna get sick. Oh well, deal with it. Get your asses back to the office. That’s the difference between the United States and most of the other countries that have been able to handle these outbreaks. Our arrogance, our odd sense of immunity to catastrophe is going to get more people killed. I guarantee you, in the coming weeks we are going to see the death toll here in the United States far surpass anything we have seen in any other single country. And if we keep on this track, on this path, by the end of this entire thing, the death toll in the United States will probably be more than all other countries combined.