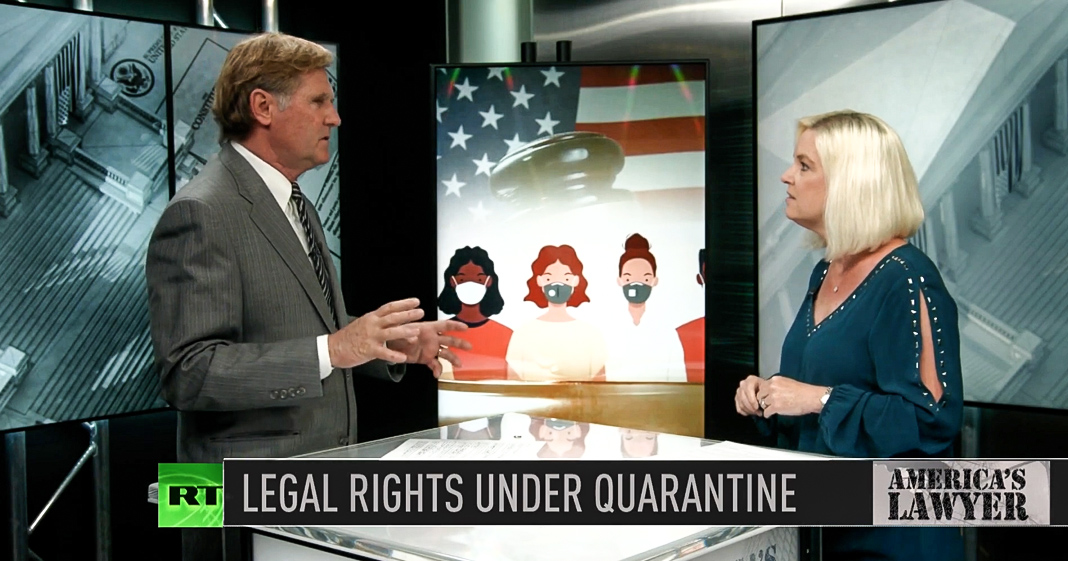 Via America’s Lawyer: Legal journalist Mollye Barrows joins Mike Papantonio to break down what state-mandated quarantines and shelter-in-place directives mean for Americans from a legal standpoint. What rights do and DON’T we have while on virtual house arrest?

Mike Papantonio: At this point, all 50 States in the US have issued States of emergency in response to surging coronavirus cases which have restricted every facet of our daily lives. But as millions of us are being forced to stay home to help contain the outbreak, just what are our rights? I have legal journalist Mollye Barrows with me to talk about that. Mollye, your, your 10,000 foot on this to start this discussion. What is it?

Mollye Barrows: Well, first of all, the constitution allows States to basically quarantine people if they want to. It’s the power to keep us all safe within its borders and healthy and whatever qualifies as being safe. So yes, if you don’t listen to government state orders, whatever level it comes down from, and they can all do it, whether it’s state, local, or federal, if you don’t listen to their orders to isolate or quarantine and they’re federally given, I mean, and they’re, you know, not, not volunteer, I should say. Right now we’re just under volunteer isolation orders. If they’re not, if they’re mandatory.

Mollye Barrows: Then they can put you in jail. In some States it’s a misdemeanor, in others it’s a felony. They can fine you in Wyoming, I think you can be fined up to $10,000, oh no, they put you in jail for a year and another one is fine you up to $10,000. Other fines are 50 to a 1000 dollars. I think it just depends on the severity of the epidemic and the last time we saw anything actually regularly or severely enforced according to the CDC, was the flu pandemic in the early 1900s here in this country. So it’s interesting. I mean, our rights are certainly compromised, but it’s more about the state of emergency.

Mike Papantonio: So the States have the right and they actually more than a right, they have a constitutional duty to protect health, safety, and welfare. And with that duty, for example in Florida, DeSantis has blown it.

Mike Papantonio: Because he had the right to say nobody on the beach to prevent all the disaster that’s going to come from that. It’s just, it’s just now starting because of DeSantis’ bad decisions. DeSantis had the right to say right now airports that are where people are flying in from New York and New Jersey.

Mollye Barrows: But he told them not to come, Pap. They’re gonna listen.

Mike Papantonio: Yeah, exactly. Told them not to come and, oh by the way, when you get here would you please self quarantine?

Mollye Barrows: Don’t cough on anybody.

Mike Papantonio: So the point is he could have done a lot more, couldn’t he?

Mollye Barrows: Yes, he absolutely could have. And in fact the university of Tampa just recently announced that they’ve got five students who tested positive for coronavirus and guess what, they were spring breakers. He made the decision to only close two beaches. Now he’s being sued for not closing the rest of them and this is something he brought on himself. So yeah, States have the discretion to enforce it. But really at this point, because it’s not mandatory, you can make civic decisions like forcing the closure of beaches or having businesses shut down, which is essentially a deterrent to people who want to gather, who aren’t going to pay attention. Like some of those invincible spring breakers that we heard so annoying soundbites from. But, you know, the bottom line is they’re putting a lot of the onus on the individual and like you said, the federal government, the CDC has the power to stop anybody that they suspect of being exposed or coming from a country like China or, you know, other countries where it’s been a problem.

Mike Papantonio: Well let me get, let me be clear. They can get.

Mollye Barrows: They can detain you then.

Mike Papantonio: They can get them off of the airplane, detain them.

Mike Papantonio: Quarantine them, say we’re gonna, you know, you’re not just coming here. Here’s the point. He can do that.

Mollye Barrows: But he’s not.

Mike Papantonio: With even intrastate travel. He could do that. New Jersey and New York has come, they’re coming down here in a flood.

Mike Papantonio: They’re trying to get away from the pandemic up there and coming here. DeSantis has no plan. He has no plan. And I don’t, I don’t think it’s just him. I think you’d have other governors.

Mike Papantonio: That own, don’t understand or they’re not willing to really pull the trigger on this 10th amendment right that they have to go as far as they need to go.

Mollye Barrows: I think you’re 100% right. But I’ll even occurred to me while you were saying that, let’s take an even bigger picture point of view. Do you think this is a problem with GOP led leadership to a certain extent? Because they’re more interested in who’s going to not donate to their campaign, make a campaign contribution, or are they going to upset the powers that be at higher levels who aren’t perceived as taking it seriously or maybe don’t understand it as well. Maybe they clearly don’t understand it themselves and it’s not an act, you know, so I don’t know.

Mike Papantonio: You have got, you’ve got a bunch of buffoons.

Mike Papantonio: In this DC bubble right now that are making…

Mike Papantonio: Stupid decisions. And the truth is where, they can’t make a decision on how do we help people because the Democrats want to pack it, they want to pack everything up with their green.

Mollye Barrows: Everybody has an agenda other than helping.

Mike Papantonio: Yeah. The green agenda, the corporate, the Republicans want to pack it with everything that’s going to help their corporate friends and at some point, I mean, there’s got to be paybacks for these people that are running and they’re going to be running elections coming up and I, I just think we have to tune in to what’s really happening here. And we, we don’t believe that there is a DC bubble that is so restricted in their innovative thinking that they can’t get past this, this deal. Do you think, do you think Pelosi or McConnell, do you think that they understand what’s happening at America’s kitchen table right now?

Mollye Barrows: No, I don’t think, I think they’ve shown that over and over and over again before this pandemic even became an issue. I think with other legislative decisions that they were making, they basically are not in touch with what, with what’s happening with the American public. They are isolated and…

Mollye Barrows: So as not to drag the mainstream press into it too, but they’re reporting on these elite people and it’s all this separation from what, and this is where you see the rubber hit the road because we’re not getting help to the people that are living it and breathing it and suffering because of it.

Mike Papantonio: And DeSantis in Florida is responsible for the same thing. Thank you for joining me, Mollye. Okay.