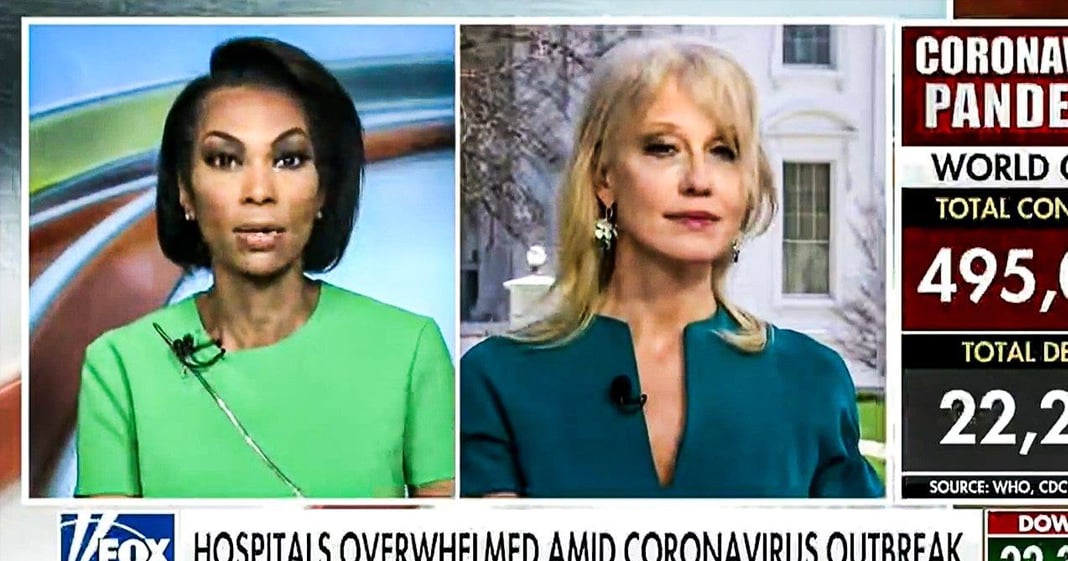 Kellyanne Conway appeared on Fox News with host Harris Faulkner this week to discuss the administration’s response to the pandemic, and everything was going as Conway had wanted until she decided to take a few jabs at the leadership in New York. At that point, Harris had to shut Kellyanne down for trying to politicize the situation by trying to make it appear as a failure of local leadership. Ring of Fire’s Farron Cousins discusses this.

On Thursday, Kellyanne Conway appeared on Fox news with host Harris Faulkner to talk about the government’s response to the pandemic, you know, to just kind of give an update on where we stand on everything. And also as Kellyanne likes to do, get in a couple of jabs there at some democratic leaders across the country. But this time Fox news wasn’t having it and Harris Faulkner would not let Kellyanne sit there and try to launch political attacks during this discussion about the pandemic. Take a look at what happened.

Kellyanne Conwaway: In the last two days alone 4,400 ventilators have been sent by FEMA to the state of New York. We know that the governor there has said he needs more and more as do other States. We are trying to go to the places most in need where we see those clusters that are there and growing. I do think it’s very disappointing that the mayor of New York city himself was riding the subway on March 5th and telling people to go out on the town March 2nd

Harris Faulkner: Kellyanne, I’m going to stop you on the politics.

Kellyanne Conwaway: Well, it’s not politics. It’s that we have a very dire situation in New York city that is not politics. I think it was politics to say go out on the town.

Kellyanne Conwaway: And we’re talking about. But that’s why this, that, look, I think this unanimously passed in the Senate is the point.

So there’s a reason why Kellyanne Conway would obviously want to take some shots at the leadership in New York and that’s because the state of New York, the city of New York, they’ve all essentially had to beg the federal government to come and help us because we are overwhelmed. Our hospitals, many of them are at capacity, over capacity. We are tens of thousands of ventilators short and you send us 4,400 we appreciate it, but that’s still not enough. We still need more. We have it in this city bigger than anywhere else in this country at the moment. Please do something and they’re calling out the federal government. But on top of that, people around the country have looked at New York and they understand that they are doing everything they can.

They are fighting this. They are being true leaders here, and they’re comparing that to what they see from Donald Trump, and that’s making Kellyanne Conway mad. So Kellyanne Conway wanted to get those shots in there, and luckily Faulkner wouldn’t let her and Faulkner was 100% right on this. This was not a discussion about politics. This was not about policy. This was about what’s happening? What are the latest updates? What is being done? Thank you for your time, Kellyanne. But that’s not what Kellyanne Conway is all about. She is not about to get in front of a camera if she can’t take at least a few shots at a couple of Democrats across this country who happened to be doing a better job at something than her boss.