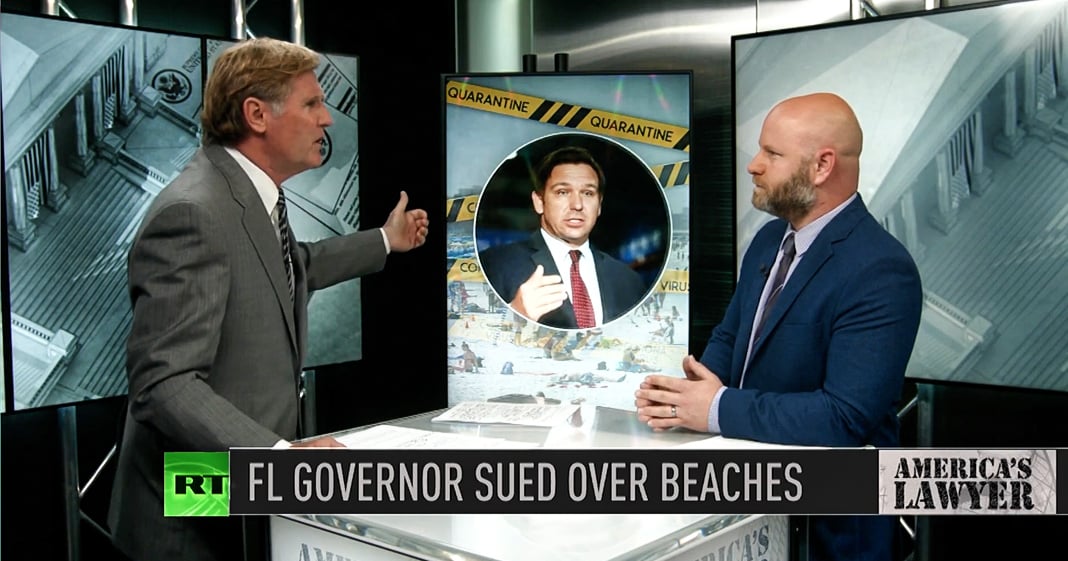 Via America’s Lawyer: FL governor Ron DeSantis is being sued for failing to close Florida beaches during this pandemic, spurring thousands of spring breakers to continue to put themselves at risk of contracting COVID-19. Mike Papantonio and Farron Cousins discuss.

Mike Papantonio: Florida governor, Ron DeSantis is being sued for failing to close down Florida beaches during the pandemic and it’s leading to all kinds of new cases of viral infection. He’s the guy, the decision stops with DeSantis. He has the 10th amendment of the constitution says that when there’s not anything that’s reserved specifically for the federal government when it comes to taking action on health, safety and welfare, that the States are supposed to do that or they can do it. It goes all the way back actually even before the 10th it goes back to, before the 10th amendment it goes back to the revolutionary war where people were dying of yellow fever in, in Philadelphia the leadership said, well, we have control. We’re going to take these people, we’re going to put them in quarantine. DeSantis has really dropped the ball here, hasn’t he?

Farron Cousins: He did and when you consider the fact that even the big attractions in Florida, Disney World, Universal, those places had already shut down before spring break hit. And like right here, we have all seen these pictures going around social media. Thousands of people packed onto these beaches. And of course once the counties and cities finally said, okay, we’re going to close our beaches. Everybody go home. The reports have been popping up for several days, oh, new case here. They got it in Florida and they brought it back to their little hometown because these college kids, people forget this, they can’t go back to their college town. They can’t go back to their dorm room. They have to go back to mom and dad who now are exposed to this virus because colleges all over the country shutdown. So they’re going back to their small towns and spreading this thing like wildfire.

Mike Papantonio: Well, DeSantis made it, DeSantis made this decision A, because he’s inexperienced. B, because he really, he had no, he, he was, he just had no, no type of experience to put him here. But that’s part of it, that’s only part of it. The other part is he made the decision because a lot of his big donors were in the hospitality business.

Mike Papantonio: And if you close down the beaches during the hospitality and the hospitality business suffers then that, it comes back on him. So instead of doing what he should’ve done and said, look, this is a real problem. This is a pandemic. These kids, as you point out, are going to go home. They’re going to infect everybody that they come in contact with because really, you know, they’re not at, they’re not at risk as much as mom and dad. Right?

Farron Cousins: Right. And that’s another scary part of this. You know, a lot of these kids may even be asymptomatic, meaning they’re carriers of it, but because they do not have enough of the proteins that this virus binds itself to, they may not show symptoms, or they may show mild symptoms that do resemble just a little cold and they go out and about their daily business. They stop at gas stations all the way back home, you know, touching those handles, going inside, touching the bathrooms. It is a disease trail, the entire, traveling.

Mike Papantonio: Yeah, and I hope we can follow it, but there’s no real way to follow that disease trail. It’s just completely out of control.

Mike Papantonio: There are thousands, tens of thousands of people on beaches. They had one idea, we’re going to go there and party. We’re going to drink. We’re going to have a great time. It’s spring break. We’ve been working hard. They’re not really thinking about what’s going to happen when they go home. DeSantis that was his job.