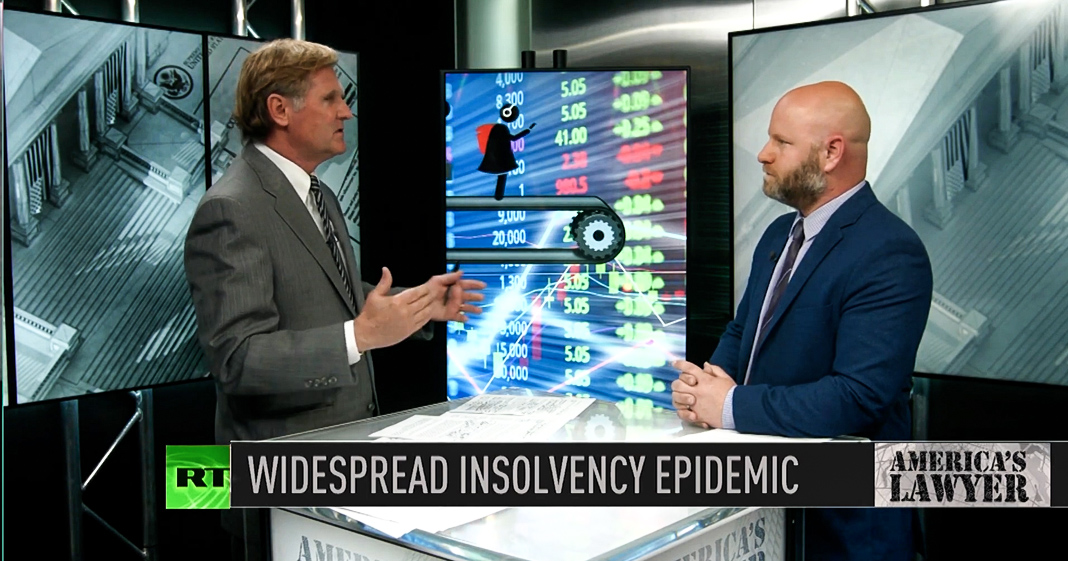 Via America’s Lawyer: Mass layoffs among the travel industry induced by Coronavirus concerns have shown large companies are prioritizing pouring money into stock buybacks rather than setting up emergency funds for their employees. Mike Papantonio and Farron Cousins discuss.

Mike Papantonio: Many of the companies lining up for a handout from the federal government aren’t victims of coronavirus at all. It’s their own fault. It’s poor judgment. Joining me to talk about that is Farron Cousins, we’re going to have a discussion about this. People always call and say, Pap, you don’t let the guest answer a question. It’s a discussion for those who are watching. Okay, so, so here, this, this, this discussion really need to center around the idea that you have corporations that knew better. Held back no cash, held back, had no plan for the future, and instead took all of their money, everything they got in tax benefits, everything that they got from the government and did stock buy backs. Take it from there.

Farron Cousins: Right. You know, we’ve spent the last couple of decades giving corporations these massive tax breaks. They’ve been making money hand over fist. The big, big banks have pulled in more money than ever. Airlines are doing great. But instead of putting that money aside, which is, you know, kitchen table economics, always make sure you’ve got enough money for a couple of rough months. These corporations decided to go ahead and essentially artificially inflate their worth by buying back their own stocks, which puts more money into their pockets and it ties their money up in the stock so they can’t spend it on other things. They can’t spend it on, you know, expanding. They can’t spend it on worker raises. It’s all tied up in this, you know, artificial stock that they’ve created. So when the market tanks, they lose all their money, they lose all their value, and that’s the exact opposite of what the stock market was actually designed to do. The stock market was invented so that corporations could get money. Could get this capital through an initial public offering, and allow the risk of the company to be taken on by average people out there. The corporation didn’t risk losing money.

Farron Cousins: But they, they broke that rule.

Mike Papantonio: It, it enrages me. Delta airlines. Okay. Delta airlines, they had one month, one month setback for this kind of a problem. They’re raking in more money than they can spend. Their, their credit line, you know, they haven’t even really called on their credit. The credit line is not supposed to be used for this kind of rainy day problem. The credit line is, is used for things like expanding business, those types of things. But instead what they did as you said, they, they took the money that they had, they were having great years and they were just greed, piggish, buying back stock, trying to prop up their company and make it look bigger than it actually was. So now we really see what, what are the smart companies? You know, you take, you take Microsoft, you take any of the tech companies, they have more cash than they know what to do with.

But these folks don’t. How about McDonald’s? These, look, these are people that they employ hundreds of thousands of people. Now they, they had a revenue of $21 million, $21 billion, excuse me, $21 billion and they have cash on hand right now to be able to take care of their employees and take care of this downtime about $800 million. And what did they do with it? Just to, like you said, they bought back stock. They paid huge dividends. They wanted to do everything they could to increase the chances that the people at the top are going to get big bonuses. Isn’t that what it comes down to?

Farron Cousins: Absolutely, 100% and that’s all these stock buybacks are about. You know, we were, we’ve been told repeatedly, you know, 40 years now about this whole myth of trickle down. You give these companies more money, they’re going to put it into the workers, they’re going to expand their business. Everybody gets raises. It’s been shown time and time and time again it doesn’t ever work in practice. And now even more so than just, oh, people didn’t get raises. Now the chickens have come home to roost.

Farron Cousins: Because they could have done the right thing. Even if they had just put the money aside and said, let’s get through a full year in case everything goes South.

Farron Cousins: But as you said they, they didn’t even put away enough for a month.

Mike Papantonio: We’re talking about some of the most, a month, two months.

Mike Papantonio: Look, you’ve got casinos. How does a casino not have enough cash to take care of their employees when things go bad? Same kind of problem. Adelson wanted to make it look like he was the biggest dog on the block, so he did incredible numbers of buyouts, buy backs of stock and paid dividends, and really the people that are suffering right now are going to be his employees.