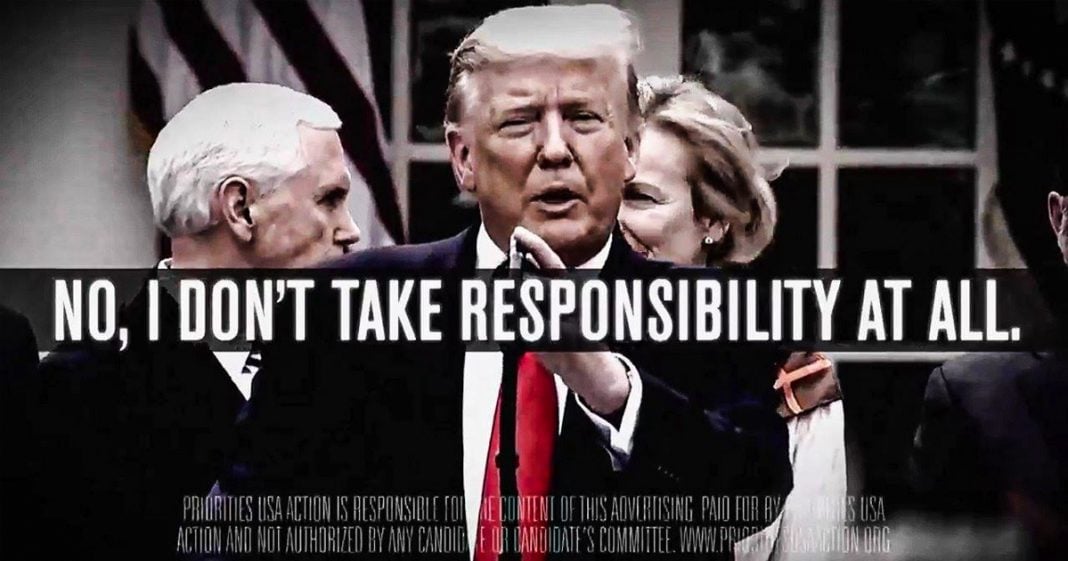 Donald Trump is not happy with liberal Super Pac Priorities USA. The group has launched a new ad that plays clips of Trump downplaying and outright denying that the country is in a crisis, and his campaign has issued a cease and desist letter threatening legal action. The President has no grounds to do this, and he’ll learn the hard way that in the Wild West of political ad campaigns, anything goes. Ring of Fire’s Farron Cousins discusses this.

Donald Trump and his reelection campaign are furious right now at the super PAC priorities USA because they have put out a new ad that uses some of Donald Trump’s own quotes in a $6 million ad buy in vital States that the president needs to win for reelection. His campaign has issued a cease and desist order to all of the networks running this ad saying, if you do not take it down, we’re going to sue you. So without further ado, ladies and gentlemen, here’s the ad that has made them so mad.

Donald Trump: The coronavirus, this is their new hoax. We have it totally under control. It’s one person coming in from China. One day it’s like a miracle. It will disappear. When you have 15 people and within a couple of days it’s going to be down to close to zero. We really think we’ve done a great job in keeping it down to a minimum. I like this stuff. I really get it. People are surprised that I understand it. No, I don’t take responsibility at all.

Speaker: Priorities USA action is responsible for the content of this ad.

Pretty cut and dry, right? I mean, they used Donald Trump’s own words and they put it in an ad, and the graph is showing the number of infections here in the United States. Now, the thing that is making Donald Trump and his campaign so angry, the reason they’re threatening legal action is because it does include, you know, oh, this whole thing’s a hoax, and they’re saying that this clip was taken out of context. Except here’s the problem with taking a clip out of context. If you’re taking a clip out of context, but not adding any commentary to it, it doesn’t matter. They’re just playing a thing that you said. They’re not offering any kind of interpretation of it. They’re just playing something that you said. In terms of slander and libel laws man, you really don’t have a leg to stand on with that. Now, if they had gone out there and flat out said that this man called the whole thing a hoax, he called the virus itself a hoax. Then you got a case because yeah, fact checkers have even said, you’ve got factcheck.org you got PolitiFact. You got Snopes that have all said that no, Trump didn’t call the the virus of hoax. He called the democratic response to it, a hoax.

Which that doesn’t even really make sense. I think we understand in context what Donald Trump was actually talking about. But if you take it at the letter of the word, then I guess, yeah, you would have to assume that, but we’re not morons and we know exactly what he was saying and so does priorities USA. Now I’m against super PACs, but I think this is a damn good ad and I think they should continue running it. But again, the cease and desist letters to the network say otherwise. Here’s a snippet from one of those letters. Given the foregoing, should you fail to immediately seize broadcasting P USA’s add exponential threat, Donald J. Trump for president inc will have no choice but to pursue all legal remedies available to it in law and in equity. We will not stand idly by and allow you to broadcast false, deceptive and misleading information concerning president Trump’s healthcare positions without consequence. You know, there’s also another thing out there, folks. I don’t know if you’ve known this, maybe you’ve seen it. Political ads lie all the fricking time. Like we literally are having arguments right now with, with Facebook and Twitter over the content of political ads. So should Donald Trump say, you know what, screw it.

We’re sewing, we’re going to make this happen and this thing goes into the court system. Do you know how much that would fundamentally change campaign ads for the better? And it would overwhelmingly hurt Republicans because if they go to court and they say they are lying in this political ad and it is harming me and if the courts say, you know what, you’re right. This is a lie. You have to pull it. You can’t run a political ad with a lie in it. You can’t run a political ad with a misrepresentation in it. Then woah boy, we are looking at a brand new era of political ads here in the United States where candidates are just suing one another every other day and eventually we get better campaign ads. Folks, this is actually a win win for the public, right? Either this ad gets to continue to air and people get to see how incompetent Donald Trump is, or he is successful, and then nobody’s ever allowed to tell another lie in a political ad. I see no downside to any of this. So Mr. Trump, Donald J. Trump for president, inc, I don’t know why you’re incorporated as a company that’s actually also weird and somebody needs to look into that, but nonetheless, bring it on.