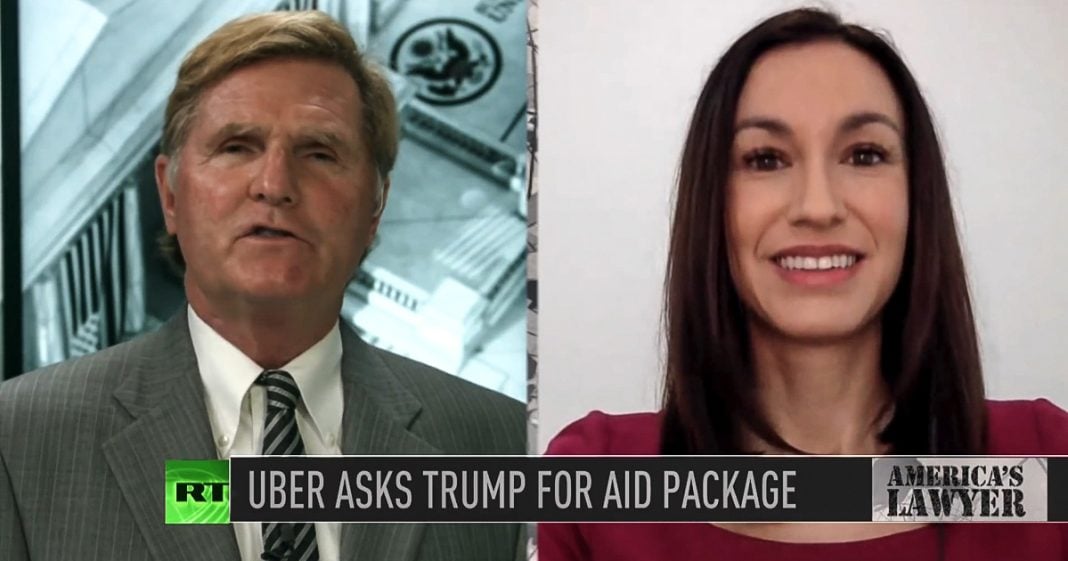 Uber has asked the president to include financial assistance to its drivers and workers in the Covid-19 economic stimulus packages. RT’s Brigida Santos joins Mike Papantonio to discuss this.

Mike Papantonio: Uber has asked the president to include financial assistance for its drivers and delivery workers in, in the COVID-19 economic stimulus packages, that’s been debated on Capitol Hill. RT’s Brigida Santos joins me now to talk about this. First of all, Brigida, let me talk about this. Are you as disgusted as I am with what’s happening with the Democrats and the Republicans on Capitol Hill? It’s just, it’s just, it’s like children that can’t come and get anything done. When you take a look at all of this, the trash they’re trying to build into the bill when all we need is one thing, solve this problem, so let’s, let’s pick it up from there. Is Uber asking for a bailout here?

Brigida Santos: They’re not asking for a bailout, at least that’s what he says on paper in the letter that he wrote to president Trump, that would be the CEO, Dara Khosrowshahi. Now, the CEO says he doesn’t want a bailout for Uber, but he wants protections and benefits and support for Uber workers who are on the front lines delivering food to people who have to stay home and giving transportation and rides to people who might need to go to work or elsewhere. Now, the company’s bookings, they have declined by 60% to 70% across most of the countries. So it’s hard to imagine that this financial aid the CEO is asking for would not benefit the company as well.

And this is so bad because the CEO has for a long time fought employees right to be classified as employees, the workers. So he for a long time has said that they’re not employees, they’re independent contractors and the whole purpose of doing that is to deny them health insurance and other benefits. So this seems a little bit misguided. While it’s good that he’s asking for help for them, it does seem a little bit, like he’s mixing his words here.

Mike Papantonio: Yeah. Well, you can’t have it both ways, is what you’re saying. Either they work for you or they’re independent contractors, and now he’s trying to merge the two according to his need. I’m wondering how is Uber protecting its drivers to begin with? I mean, isn’t that part of the problem? You’re throwing them in a car with just about everybody. Are they doing anything to protect these workers, as they call them, contract workers?

Brigida Santos: Look, they said that they’re suspending their carpool service, which allows more than one passenger to ride at a time, meaning strangers. But it’s now also saying that it’s taking Congress’s recommendation to provide drivers with up to 14 days of financial assistance if they’re unable to work because of a positive diagnosis or because of government quarantines. And it’s also promised to provide protective gear, sanitizers and masks to drivers, but it’s reportedly failed to deliver so far and Uber has not also not said whether it’s going to notify passengers of potential exposures to the coronavirus while using the ride share platform. You know, drivers are already struggling to earn living wages, working for Uber. Many of them can’t afford to take time off unfortunately and Khosrowshahi is really starting to see that his company can’t be successful without those drivers. So he’s asking for these new protections, but if you really care so much you should classify them as employees.

Mike Papantonio: Well, it’s hard to tell what Congress is, it’s, it’s a, it’s a dummy bubble. I like to call it the dummy bubble, the DC dummy bubble. We have Pelosi trying to load everything up in this legislation. Republicans trying to load up for corporations and legislation that is going to give people some relief while we work our way through this. But you’ve got a whole gaggle of dummies, Pelosi dummy, McConnell dummy. They all have their special interests and so I don’t really see much being done. If I look at this story out, my, my, my conclusion is you got a bunch of dummies trying to figure all this out and I’m wondering, has Congress, the dummies shown any interest in protecting these workers in this sharing economy?

Brigida Santos: You know, they say that they have interest, but again, they’ve got to put the writing on the wall. Some members of Congress, just a few of them have actually called on Uber and other ride sharing and sharing economy companies like Postmates, Instacart and Grubhub to take action to prevent COVID-19 from becoming the thing that is shared in the sharing economy. Some of the ideas they’ve suggested include creating a coronavirus health fund that workers can tap into if they need to get tested or if they need to be quarantined. And they’ve also suggested that the companies pay workers their average pay even if they aren’t working those average hours.

But again, that’s something that these companies are going to have to decide to do on their own. As far as Congress is concerned, they just can’t seem to get along. The, that’s the problem with pitting Democrats against Republicans and having these two parties because they’re actually just one party and that is really the corporate party working on behalf of these corporations like Uber, which has heavily lobbied against worker protections.

Mike Papantonio: And it’s a catastrophe. It is a bubble, DC bubble catastrophe. And I hope, I just pray that we hold these folks responsible for the disaster that they’re causing across this country just because they can’t get together just for a minute and work something out that’s going to help Americans all over this country. So anyway, Brigida, thank you for joining me. Okay.