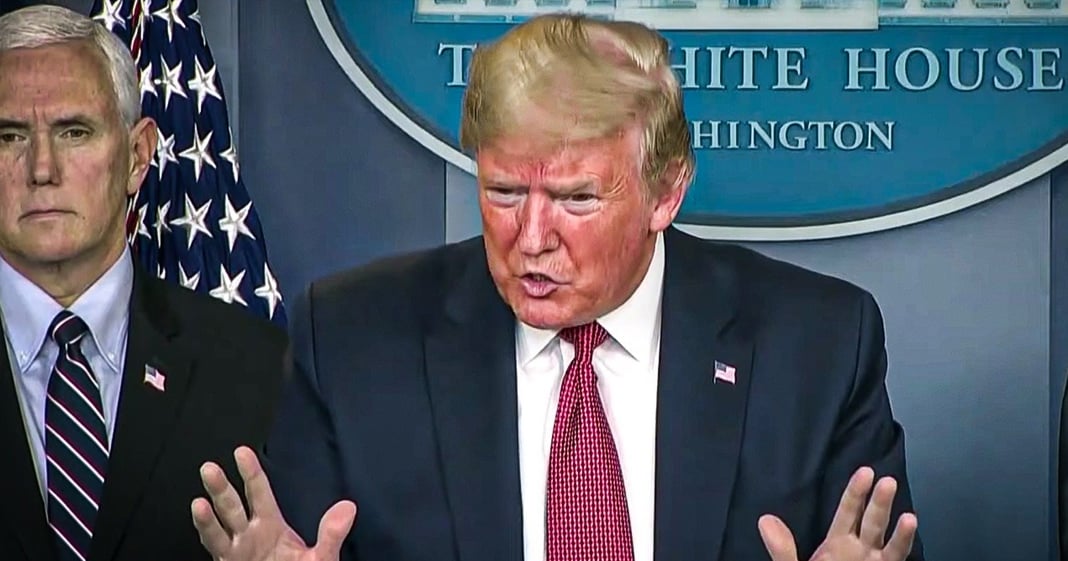 Donald Trump’s paranoid delusions were on full display on Wednesday when he lashed out at a reporter for asking about his Easter timeline for making the crisis go away. The President believes that the media is working against him and that they want the economy to fail so that he can’t be reelected. His delusions are going to get more people killed, as Ring of Fire’s Farron Cousins explains.

Donald Trump’s paranoid delusions were on full display yesterday during a white house press briefing where a reporter asked Trump about, how’d you come up with this timeline of when we’re going to open the country? You know, what’s driving this? What is going on? This doesn’t make any sense and Trump absolutely lost his mind and tried to pull the audience into his paranoid delusions. Take a look.

Reporter: You tweeted earlier linking the closing of the country to your election success in November. Is this Easter timeline based on your political interests?

Donald Trump: What do you mean by election success? No.

Reporter: You, you tweeted, you said that the media wants the country to remain close to encourage your odds of being reelected.

Donald Trump: No, the media would like to see me do poorly in the election. I think. I think.

Reporter: Sir, lawmakers and economists on both sides of the aisle have said that reopening the country by Easter is not a good idea. What is that plan based on?

Wow. We wouldn’t even have a country left, he says. This country would already be gone if it weren’t for him and his strong leadership and the leadership of his pandemic response team. None of that is true, by the way. Also, it’s not true that any members of the press out there are hoping that the economy fails. We’re hoping the economy succeeds. Right now, we do not care very much about the 2020 presidential election. We’re concerned about the here and the now. We’re concerned about containing the pandemic, which you don’t seem interested in doing whatsoever. We would like to see American workers get checks in their bank accounts right now, but instead you, your administration, Republicans and Democrats in the Senate and the house, they want to give money to corporations that is not going to actually help the economy. That is not going to save the stock market.

That is not going to do anything other than pad the pockets of the people who do not need it. We want to help the economy, but you can’t do that giving massive $2 trillion bailouts to corporations. You know what drives this economy just as much as the rest of us do and whether you want to admit it, whether the public wants to admit it, we all know the truth. The people who drive economy are the people at the bottom. We are the wheels of this economy. Without it everything at the top comes crumbling down and grinds to a halt. But if you put money in our hands, we’re going to go out there and spend it. We’re going to do things that we’ve been putting off for quite some time. We’re going to make major purchases. We’re going to get car repairs that are desperately needed.

New tires, go to the doctor, buy our prescriptions, buy groceries. Those are the things that we would do with this stimulus money. These corporations that are laying people off left and right, these same corporations that spent all their tax refunds on stock buybacks, they’re going to do the same thing with this. And I know for the moment there’s a moratorium on buybacks for any company that accepts the stimulus money, but that only lasts a couple months. Then you’re free to do whatever the hell you wanna do and they’re going to do that. But in the meantime, Donald, nobody is wishing that this economy tanks, nobody is trying to take you down with this virus. That’s all in your head and you’re lashing out at that reporter for asking you an honest question shows that you are not only not taking this issue seriously, but that you’re clearly not mentally capable of leading this country.