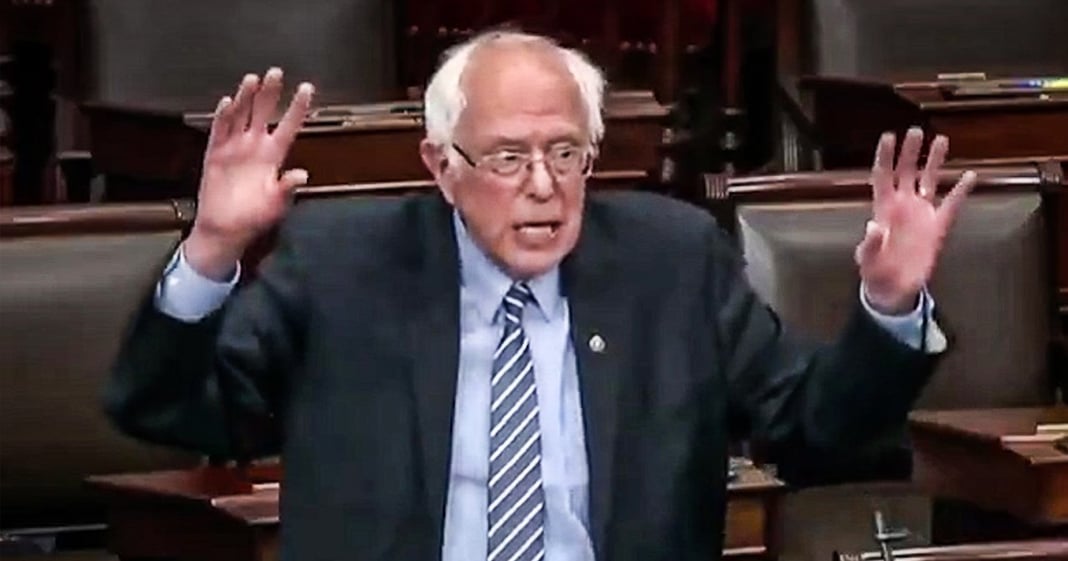 Bernie Sanders is the only reason that the $2 trillion stimulus package passed by the Senate has anything decent in it. His refusal to allow passage of the bill until Republicans agreed to extend unemployment benefits saved what would have otherwise been a complete piece of trash. He delivered one of the most passionate and down-to-earth speeches in recent memory, and this speech might just save lives in the end. Ring of Fire’s Farron Cousins discusses this.

This morning it was announced the jobless claims for the last week have jumped to 3.3 million, the largest jump in the history of the United States week by week and last night, Bernie Sanders took to the floor of the Senate and fought for unemployed Americans with regards to the stimulus bill. See, Bernie Sanders had pledged earlier in the day that he would not allow this bill to move forward if Republicans didn’t get onboard with his idea to expand unemployment payments to American workers. And again, this was before we knew that in the last week, 3.3 million Americans lost their jobs and Bernie Sanders was out there fighting for them, not even realizing how many people he was fighting for and Republicans and even some Democrats attacked him for trying to hold up this bill. But in a fiery speech on the Senate floor, Bernie Sanders made his case and was successful. Here is the speech. This is absolutely one of the best speeches that we have seen on the Senate floor in years.

Bernie Sanders: And now I find that some of my Republican colleagues are very distressed. They’re very upset at somebody who’s making 10, 12 bucks an hour might end up with a paycheck for four months more than they received last week. Oh my God, the universe is collapsing. Imagine that somebody was making 12 bucks an hour now, like the rest of us faces an unprecedented economic crisis with the 600 bucks on top of their normal, their regular unemployment check might be making a few bucks more for four months. Oh my word. Will the universe survive? How absurd and wrong is that? What kind of value system is that? Meanwhile, these very same folks had no problem a couple of years ago voting for $1 trillion in tax breaks for billionaires and large profitable corporations. Not a problem, but when it comes to low income workers in the midst of a terrible crisis maybe some of them earning were having more money than they previously made.

Oh my word. We got to strip that out. Got to, you’ve got to tell those poor people that no matter what, by the way, when this bill, when the McConnell bill first came up unbelievably, and I know many Republicans objected to this, they were saying that, well, we want to give a whatever it was a thousand or 1200 bucks, but poor people should get less. You’re saying because poor people are down here, they don’t deserve, they don’t eat, they don’t pay rent. They don’t go to the doctor. They’re somehow inferior because they’re poor. We’re going to give them less. Well, that was addressed. Now everybody is going to get the $1,200 but some of my Republican friends still have not given up on the need to punish the poor and working people. Y’all haven’t raised the minimum wage in 10 years. Minimum wage should be at least 15 bucks an hour. Y’all haven’t done that. You’ve cut program after program after program and now horror of horrors for four months workers might be earning a few bucks more than they otherwise would. Well, needless to say.

Everything that Bernie Sanders said, right there was 100% true. You know, his mocking of the reactions of the Republicans. Those are literally things that they have said. Those are literally the reactions that these Republicans have had. These Republicans actually had these reactions before Bernie Sanders speech. You had Lindsey Graham going out on TV saying that we can incentivize people not to work because if the country opens up in a month, these people are looking at their unemployment checks and saying, hey, I shouldn’t go back to work. I’m a lazy freeloader. Then Senator Rick Scott came out and said the exact same thing and all of this was before we knew how horrible the unemployment numbers were going to be today. But Bernie Sanders didn’t care. He knows how bad the situation is and he knows that it is his job to go out there and fight for the working class. The Republicans seem to not care about that at all, which is something we’ve been saying for 16 years now and nothing’s changed.

But we have to understand folks, if it were not for Bernie Sanders, that unemployment expansion would not have been included in that stimulus package that the Senate passed and it would just be a one time check of $1,200 depending on your means testing. If not, you could get $500 or $0 once and that’s it. The rest would go to corporations. Bernie Sanders is the one who went out there and fought for that. Bernie Sanders is the only one who went out there to fight for that. Let me put it that way. The only one. 100 senators, I guess technically 96 because you had some who weren’t there to vote and they’re in quarantine. One of them has the virus. 96, and out of those 96 the only one person in that Senate who actively fought to expand payments to unemployed Americans was Bernie Sanders. There is still time to make this man our democratic nominee, but not much. We need to do everything we can because this man truly cares. This man, honest to God, wants to help working people. And based on yesterday’s vote, you cannot say that about any other person in that Senate right now.