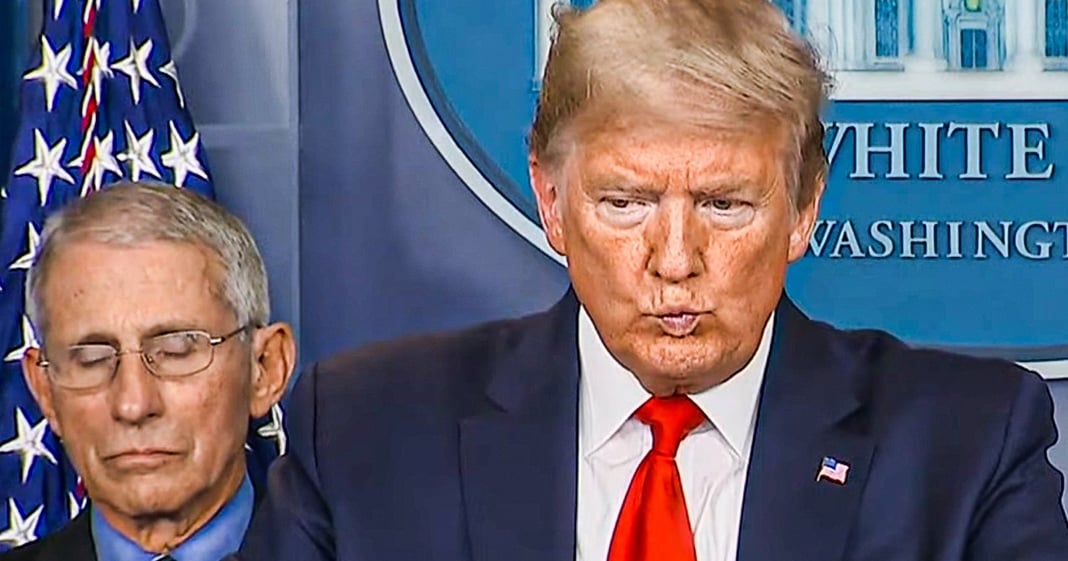 Donald Trump proudly proclaimed on Tuesday that we had “won” the fight against the Coronavirus. The data says otherwise, as America has failed to flatten the curve and infections and deaths continue to rise. Trump is desperate for a victory on this issue, but reality is once again not fitting in with his narrative. Ring of Fire’s Farron Cousins explains how Trump’s preemptive victory will only result in more destruction for this country.

Good news, everybody. We have officially defeated the coronavirus here in the United States, or at least that’s what Donald Trump told us on Tuesday. He said, during a briefing, we’ve won. We’ve won the fight, folks. We are on the downswing. We’ve got the virus on the ropes. The country can return to normal right around Easter time, the president told us. Here’s his exact quote. He said, it’s been going awhile time. I don’t know what that means, but we win. We win. Those were his exact words. We win. You know, I’m really surprised that the man didn’t fly in wearing a jumpsuit under a giant banner that said, mission accomplished because that is exactly what this is. This is Donald Trump’s mission accomplished moment. We haven’t won. As the president was saying these words, we win, 129 people in this country died from the coronavirus yesterday, the highest total number of deaths in a single day in the United States from this virus.

We have not flattened the curve, as they say, we’re still on the upswing. We have over 50,000 cases of this virus in this country. 50,000 people have tested positive for COVID-19. 50,000 and this moron has the audacity to go out there and tell us we win. No, we’re not even at the peak yet, folks. Stop listening to this man. Stop giving him the attention. We are not okay. We are not doing well. We are not defeating the virus. The virus is defeating us and Donald Trump is just whistling past the graveyard. He knows how bad things are, but he knows he can’t win reelection if the economy is still in the toilet. So he is out there lying to our faces trying to convince us that everything is fine. Everything is great. Go take this deadly cocktail of drugs that will explode your heart and everything will be good.

You can go back to work. Sorry grandma, grandpa, you’re probably going to die, but that’s a sacrifice we’re willing to take. Thank you for laying down your life for the NASDAQ. That’s what he’s telling us. Folks, none of this is true. None of this is true. We are not on the downswing. We’re not even at a plateau yet. We have not won. We are not doing well. This cocktail of drugs that the president has suggested is very dangerous according to doctors and cannot be taken unless under very close supervision by medical professionals, if at all. No, we don’t know what the hell we’re doing. Donald Trump doesn’t know what the hell he is doing and we definitely don’t need to be listening to him when he makes idiotic statements like, we win, when very clearly according to all of the data, the virus is kicking our asses here in the United States.