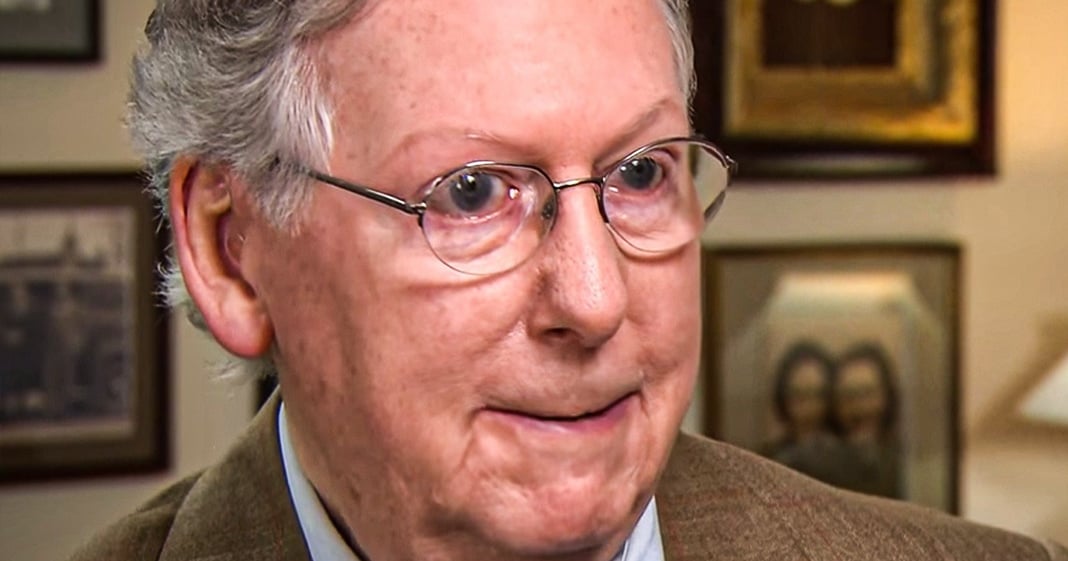 Republicans and Democrats in the Senate have reached a deal on a stimulus package that provides hundreds of billions of dollars for businesses and one-time payments of $1,200 to American workers. This package is an absolute insult to every American citizen, and it proves that no one in the leadership in DC actually cares about the plight of Americans. We deserve better, and we have a lot of work to do in November to get there. Ring of Fire’s Farron Cousins discusses this.

Early this morning it was announced that the Senate and the white house had come to terms on a stimulus package that still has to obviously be reconciled with the house of representatives, but both Democrats and Republicans in the Senate seem to be fairly happy with what they’d come up with. This is a plan, the white house has said, yes, we’re good with this package, so this looks to be what a final deal will eventually look like and this deal sucks. This deal is a disaster. This deal is an insult to every single American citizen who is not a member of the top 1%. Actually, according to this, it’s everyone who’s not a member of the top 30% here is what this disastrous bill includes. A one time payment of $1,200 for every American. As long as you make less than $75,000 a year. So if you make $75,001 per year, per year, 2018 taxes, sorry, you didn’t make the cut. They put a frigging means test on this thing folks, and that is a disaster waiting to happen. $75,000 is not a blanket amount of money across this country, is it? $75,000 to somebody living in a backwoods area say in Alabama, that’s a very, very good salary. $75,000 to somebody living in New York city, nope. Not going to cut it.

So yeah, they really screwed us over on this. But Hey, if you’re a corporation, you’re about to make bank this $2 trillion package, which is $500 billion less than the package that Pelosi is allegedly working on in the house of representatives, includes hundreds upon hundreds of billions of dollars for corporations. Here’s a little bit about that. There’s 500 billion for a major corporate liquidity program through the federal reserve. 367 billion for a small business loan program. 100 billion for hospitals in 150 billion for state and local governments. Hospitals, the people on the front lines of this crisis right now, they can’t. They get a fifth, a fifth of what we’re giving to big businesses, a fifth. We, we deserve whatever happens to us at this point. I hate to say that. I hate to finally just say, screw it. I give up, but screw it. I give up. I don’t know what else to say. I don’t know what else to do.

$1,200 is an insult. If it was monthly, maybe we could work with that a little bit here during this time of crisis. But a onetime payment? Go to hell, go straight to hell. Over $1 trillion for big businesses who are only in the current situation that they’re in because they couldn’t handle their own money. They spent it all on their own stock buybacks instead of putting it away. And we’re going to give them over $1 trillion and Democrats in the Senate, led by Chuck Schumer, look at this deal and they say, hey, it’s not perfect, but uh, you know, it is what it is. It’s actually what he said about it, by the way, that’s what he said. I’m done. I’m done. I don’t know what else to say. This is an insult. This is absolute corporate slush fund welfare, the same corporate slush fund, by the way, that two days ago Democrats were acting like, what’s the worst thing on the planet. And now they’re saying, okay, well we’re going to do this. So it also includes a bunch of tax cuts too for businesses. And you know what that’s going to do? That’s going to end up cutting social security. You cut that payroll tax for corporations. That’s going to mean less money going into social security, which will give Republicans the clearance to go ahead and cut the program.

The only saving grace of this bill was that Bernie Sanders managed to get in extra protection for unemployed workers. Republicans were only going to give him $600 instead of the 1200. Bernie got that number increased to the 1200 number and extended unemployment benefits for four months. Bernie Sanders is the only reason parts of this bill are palatable. Everybody else fell flat on their faces trying to give more and more money to corporations. November’s coming, folks, November is coming, vote them all out. And by the way, I’m not just talking about Republicans either. Get rid of them. These people suck. These people are horrible and these people don’t understand how to actually help the American public. Democrat or Republican I don’t even care anymore. Get them out. Yeah. There’s a couple of good ones up there and you know who they are. I don’t have to sit here and name them, but there’s so few of them that you could count them on two hands even if you were missing a couple of fingers. That’s how few there are. Save them, every other one of them, get them the hell out.