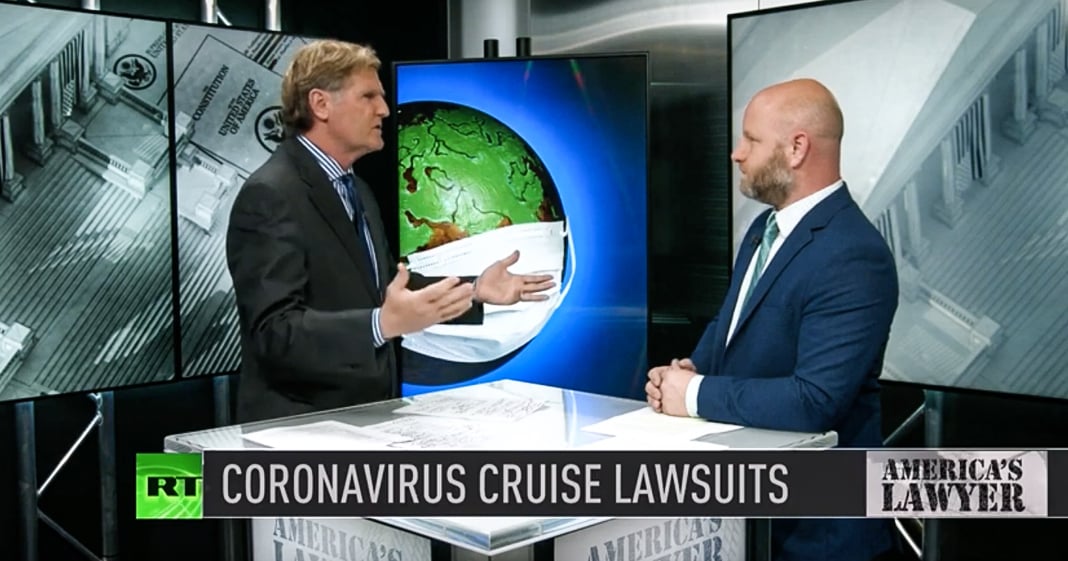 Via America’s Lawyer: Passengers aboard the Princess cruise liner which became a floating Petri dish for the Coronavirus have filed lawsuits against cruise owners for putting profits over people and failing to properly screen passengers. Mike Papantonio and Farron Cousins discuss. Then, Mike Papantonio is joined by President of Top Class Actions, Scott Hardy, to outline the dangers of OxyCide, a disinfectant used across U.S. hospitals which has been found to cause breathing problems and skin burns among hospital staff.

Mike Papantonio: The coronavirus is spreading all over the world and now lawsuits are beginning to pop up over contamination and corporate failures to prevent it. This, this is no surprise. This story is no surprise. What is up with the shipping business? I mean, the grand princess, the diamond princess. Here’s what’s so ridiculous about it, okay. These people, before this happened, this corporations were making more money than they could spend. People were, they were setting up, they were setting up trips three years in advance because it was, it became so popular. The baby boomers are traveling everywhere, right? They know this has been a problem with other types of infectious disease. They’ve never solved the problem. What’s your take?

Farron Cousins: Right. Well, the first time I saw this story, I thought, well, this makes sense and it always seems to be the cruise ships. There is always some kind of outbreak and you can trace it, okay, we started on this cruise ship or we got a quarantine, you know, 1500 passengers and the people who filed this lawsuit, they’re, they’re Florida residents on the princess cruise line. They actually filed it while they were still stuck and quarantined on that boat.

Farron Cousins: And so what they’re saying is, listen, this princess cruise lines could have taken precautions. They could have actually screened people, but instead what they had passengers do before they got on this ship was sign a piece of paper saying, no, I’m not sick. That is the extent of the medical testing for every passenger that got on that boat.

Mike Papantonio: They don’t want to spend the money. Okay. This is what it looks like. Cattle pulls in to the dock. All the cattle get off. Mostly elderly people, 60 and above who are traveling, right, baby boomers who are traveling. They get off the boat, on comes a new bunch of cattle, 60 and above getting onboard the cruise ships. In between there they have no time to do anything to adequately make safe that ship and they’ve known it’s a problem. They’ve known the quick turnaround is a huge problem. They’ve known that there are filtering systems that actually work. They really do work, but they haven’t spent the money to put them on their ships.

Farron Cousins: Right. It’s not just about the, the pre-boarding screening process. It is about the safety measures on the ship itself. You know, you can put the UV lights into the filtration systems, that is going to cut down on a lot of germs in the spread of diseases.

Mike Papantonio: But it costs money.

Farron Cousins: Yes it does. It’s it, that’s not cheap on that large of a scale, but it does work. And now these cruise ship lines, and we’re probably going to see a lot more litigation like this evolve over the next few weeks.

Farron Cousins: But they’re going to be on the hook for a lot more money than they would have paid if they would’ve just put these precautions in place and you could have saved people, maybe not stop the quarantines because that was necessary, but you could have prevented more people from getting infected.

Mike Papantonio: You know what really calls your attention? Okay. The diamond princess had just gone through this problem with coronavirus on coming from Mexico. Right? Then the, and that was before the problem with the grand princess. They don’t make any changes at all knowing that they’ve spread the coronavirus all around on the diamond princess. Nothing changes in the way they go about doing things. Here’s the other thing, employees. Sometimes you have to say, I’m going to put more employees on and I want to put less, fewer travelers on. They won’t do that because it’s a money issue. So I mean look, this is all about money and if this, if this industry is going to make a comeback right now, their stock is, you know, crashed.

Mike Papantonio: It’s like I don’t, you know, you wonder are they gonna stay in business. It’s crashed because they’re building new ships every day. I don’t know if they make a comeback. What do you think?

Farron Cousins: Well, I don’t know. Especially considering the fact that a lot of these ships are registered overseas, so they don’t necessarily get regulated as stringently as they should. We’ve got to do some, the federal government does have to step in and say, listen, if you’re going to be a cruise ship stopping in the United States, you are going to adhere to our standards and if you don’t, you’re not dropping anchor here.

Mike Papantonio: But best practices, that’s one thing you do, best practices they say we follow best practices. If you take a look at it, in reality, they’re really stretching that truth. But more importantly, the technology is absolutely there. There’s no question. It’s expensive, but they could use the technology and they could save lives and prevent this kind of economic disaster for this industry.

Mike Papantonio: Many hospitals have been using a disinfectant called OxyCide to prevent the spread of disease. The only problem is that the cleaner has now been linked to huge, huge problems of lung problems that doctors and nurses are suffering with. Entire staffs are suffering with. I have Scott Hardy, the president of top class actions, joining me now to explain what’s going on. Scott, you know, this is your specialty. You see these kinds of cases come down the pipe all the time. This is, this is an odd one. This is here you’ve got an entire medical staffs, you’ve got doctors and nurses and everybody working around the hospital believing that OxyCide is there to make them safe. Give me your take on it.

Scott Hardy: Sure. So OxyCide was created by Ecolab, you know, a massive industrial cleaning company and they came out with OxyCide to battle things like C diff. C diff is really hard to kill. So they made this super strong cleaning solution that at first to actually use it, the hospital workers, the, the, the cleaners there would have to put on full protective gear and you know, masks, gloves and then be able to clean these rooms to battle things like C diff. But now, they’ve found that it’s very dangerous. And so Oxy, Ecolab came out and said, okay, we’ve got OxyCide, now we’re going to start diluting it so you can buy this special diluter. And at that point, the cleaners no longer have to wear or are required to wear n95 masks because of the, of the strong fumes. So then they use this and they wipe it down and it actually stays wet for at least three minutes and that’s intentional to continue to disinfect and kill these bacteria like C diff.

Mike Papantonio: So Scott, the problem you have, I mean, as we said, you’ve got doctors, nurses, patients who are on the death bed, sometimes. Their immune system is really, really in bad shape and so, so now you’re spraying OxyCide all over the area where they’re in the hospital. So it’s not just doctors and nurses, it’s patients too. What are the longterm effects of OxyCide?

Scott Hardy: We’re seeing that doctors, nurses, janitorial workers, the cleaners that are going into these rooms, they’re developing strong allergies to OxyCide from inhaling all of the fumes over a long period of time. And so that exposure amounts to, they can get sores on their mucus membranes. I reviewed more than a hundred different submissions from people. They had cracked hands, cracked skin from constantly being, touching services. They’ve got stinging, watery eyes, headaches. You’ve got doctors and nurses that are walking into these rooms that might’ve been on vacation for a week. As soon as they walk into a sterilized room, they have something like an asthma attack. They can’t do their jobs anymore because of these severe reactions from these fumes.

Scott Hardy: Exactly. So right now there’s been a class action filed, but we also see this becoming a mass tort, you know, there will be an MDL filed eventually to represent these doctors, nurses, cleaners on an individual basis to make sure that they can get compensated for these injuries. If they can’t go into work anymore, you know, you know, without suffering a severe allergic reaction, then we want to make sure that those folks are able to get paid as this lawsuits, these individual lawsuits start progressing.

Mike Papantonio: Yeah, well I certainly see the, I see, I certainly see the possibilities of what we would call an individual injury case or a mass, mass tort kind of case. But the thing that concerns me most is they’ve just, there’s not even enough time at this point to figure out how bad the longterm injuries may be. So, we’ll have you back on the show and talk about this because this is in hospitals all over, all over the world at this point. This was sold as, this was sold as the new best standard of practice to use in a hospital and now we’re seeing this take place. Scott, thank you for joining me.

Scott Hardy: You’re welcome. Thanks for your time, Pap.