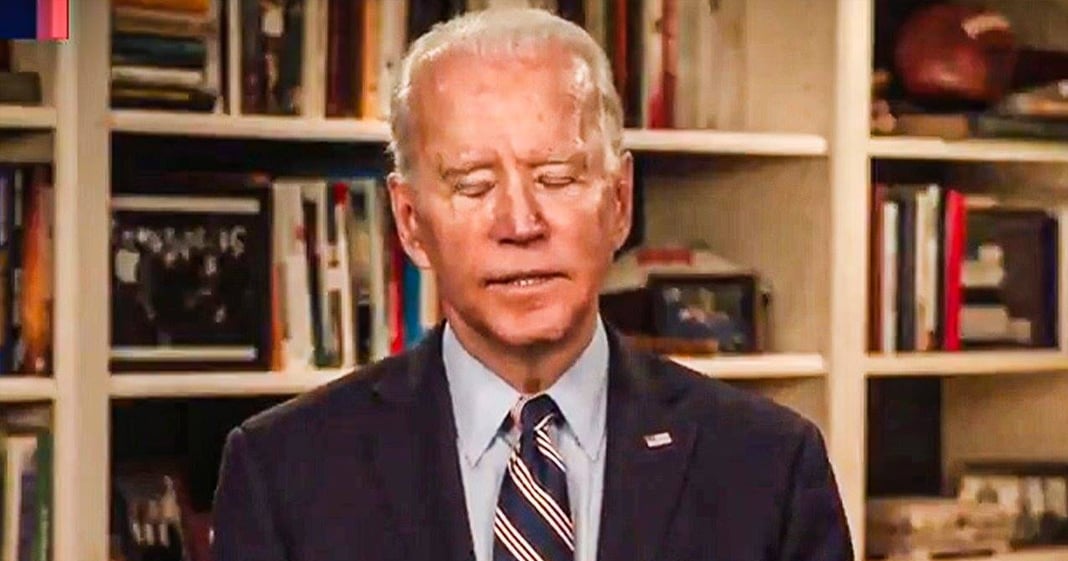 Joe Biden emerged from his 6-day hiatus on Monday, and most Democrats are now hoping that he goes back into hiding. His TV appearances and personal addresses to the nation have been nothing short of horrendous, and the Presidential candidate is coming across as an incoherent mess. There’s still time for Democrats to choose someone else, but that time is running out. Ring of Fire’s Farron Cousins discusses this.

So on Monday, Joe Biden, after six days of not being seen, finally came back out and started issuing some messages from his home, started doing some TV hits from his home. And unfortunately every single bit of it has been an unmitigated disaster. Here’s a clip, this is a clip that was circulating around Twitter. This is, basically all the gaffes that he has made. This is not meant to mock him or make fun of him, but I do want to share this because I want people to see what it took six days for this campaign to come up with. Here’s the super cut.

Joe Biden: They can’t build any factories or any, any, anything within one mile of the estuary of the Delaware river and the Atlantic ocean and the Chesapeake and so, but the whole point of this is that we can do a lot to deal with endangered species. We have to take care of the cure that will make the problem worse no matter what. Why doesn’t he just act like a president? That’s a stupid way to say it.

Nicolle Wallace: You know, Donald Trump was asked on.

Nicolle Wallace: It feels that way. I want to ask.

Joe Biden: We need to activate the reserve Corps of doctors and nurses and beef up the number of responders dealing with the crush, these crush of cases. And uh, and in addition to that, in addition to that, we have to make sure that we, we are in a position that we are, well, let me, let me go to the second thing. I’ve spoke enough on that. We can take, we, we, we can make a personal productive equipment. Look, here’s the deal. We have to do what we did in the 40s and the 20s, the 2020s.

Now again, this is not meant to mock Biden. I understand he has a stutter, but that doesn’t explain away these bizarre appearances. I know in some of those clips there is a delay. That’s what happens when you do national TV from a remote location. There is a delay. So that’s why there’s those awkward pauses in that one clip, I don’t remember if it was MSNBC or CNN, but yeah, there’s pauses because there’s delay. The audio doesn’t get there in time, so that’s not, that’s not on him. But the crazy things he’s saying that is on him folks, that’s bad. I don’t care if you’re a Biden supporter, a Biden hater, Democrat, Republican, whatever you are, you have to look at all of this and you can even go back and watch all of those clips in context and they don’t look any better. We have to be honest with ourselves at this point.

And if you look at that and you say, you know what, this is fine, or oh, you know what, that’s probably just his stutter. You’re lying. You’re lying to yourself and you’re lying to every single person you say that to and you know it, you know that this doesn’t look good. You have Donald Trump out there re-tweeting these same Supercuts to millions of people convincing them that Joe Biden has dementia. Now, yeah, it’s been widely speculated that Donald Trump is also suffering from some sort of brain disorder and I don’t doubt that one bit. But he has already captured this narrative. He has already done this. Republicans are out there doing this and have been for weeks folks. They got ahead of the message. They put the message out there and the message stuck. That’s what happened. You cannot overcome that and you cannot change that. These clips that the Republicans are out there circulating right now, those are going to be campaign ads in the coming months, folks. Every single person in this country that has television is going to see that what I just showed you on their TV. Do you think that’s going to inspire confidence in swing voters?

Do you think that’s going to inspire confidence in, you know, the people, the, the young generation? Do you think they’re going to look at that and say, heck yeah, I got to get out and vote? We’re going to see massive numbers of people stay home if Biden is the nominee. We still have time. There is still plenty of time in this primary season, assuming the DNC doesn’t cancel it. They got to figure something out because we can’t put people in harm’s way to go out there and vote in person, but there are still enough delegates out there that could let a different person become the nominee. And if Joe Biden keeps up this mess, these kinds of appearances, there may be a floor fight at the DNC trying to get him out of there because he is a liability. That clip I just showed you, that’s not a man that’s going to beat Donald Trump. I don’t care what’s happening. And by the way, you look at the polls right now, Trump’s approval ratings going up for some reason. This is bad. If you put Joe Biden up as the nominee, he’s going to lose to Trump. And as I’ve said before, I do not have a hatred of Joe Biden, I don’t. I don’t agree with a lot of his policies. I certainly don’t agree with things he’s done in the past at all. But do I hate him? No. But I want us all to be realistic about this. If Joe Biden is the nominee, Donald Trump will win a second term. It’s as simple as that.