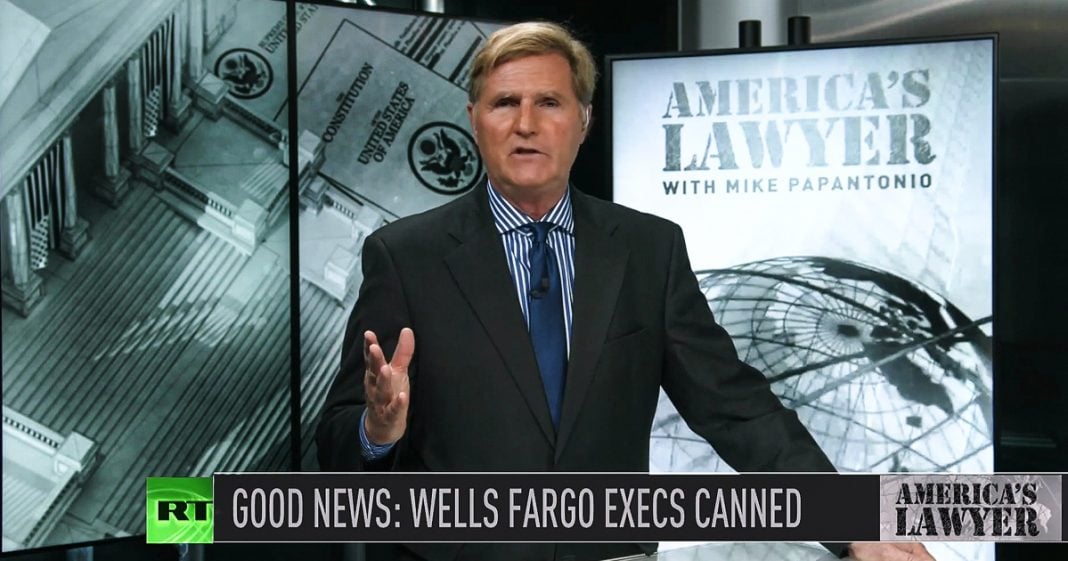 Via America’s Lawyer: Two members of the Wells Fargo board of directors had been forced to step down after reports showed that these board members had ignored complaints that the bank was abusing consumers for decades. Mike Papantonio explains more.

And finally tonight, some good news. Two members of the Wells Fargo board of directors had been forced to step down after reports showed that these board members had ignored complaints that the bank was abusing consumers for decades. The report issued by the house financial services committee specifically called out the two board members, Elizabeth Duke and James Quigley, by name and explained how these two were instrumental in the company’s deceptive practices and their failures to put any safeguards in place to protect consumers. The Wells Fargo corporate rep sheet is very, very long.

But in, in just the past decade, the bank has paid billions of dollars in fines for things like selling unnecessary financial products to customers. Charging customers for insurance that they absolutely did not need. Selling mortgages that they knew were going to fail in the lead up to the 2008 financial collapse. There are more crimes than we can even list in this program where it comes to Wells Fargo, but these two board members, they didn’t deserve to just step down. They deserved to be marched out of the building in handcuffs and that’s the only action this is going to be taken to actually prevent behavior like this in the future. More people in banking industry like Wells Fargo need to be perp walked. It’s the only way we change our culture.

That’s all for tonight, find us on Twitter and at Facebook on facebook.com/rtamericaslawyer. You can watch all RT programs on Direct TV, Channel 321 and also stream them live on YouTube and be sure to check out RT’s new portable app where you can watch any of your shows, any shows that you want on the air. I’m Mike Papantonio and this is America’s Lawyer, where every week we tell you the stories that corporate media is ordered not to tell because their advertisers won’t let them. Have a great night.