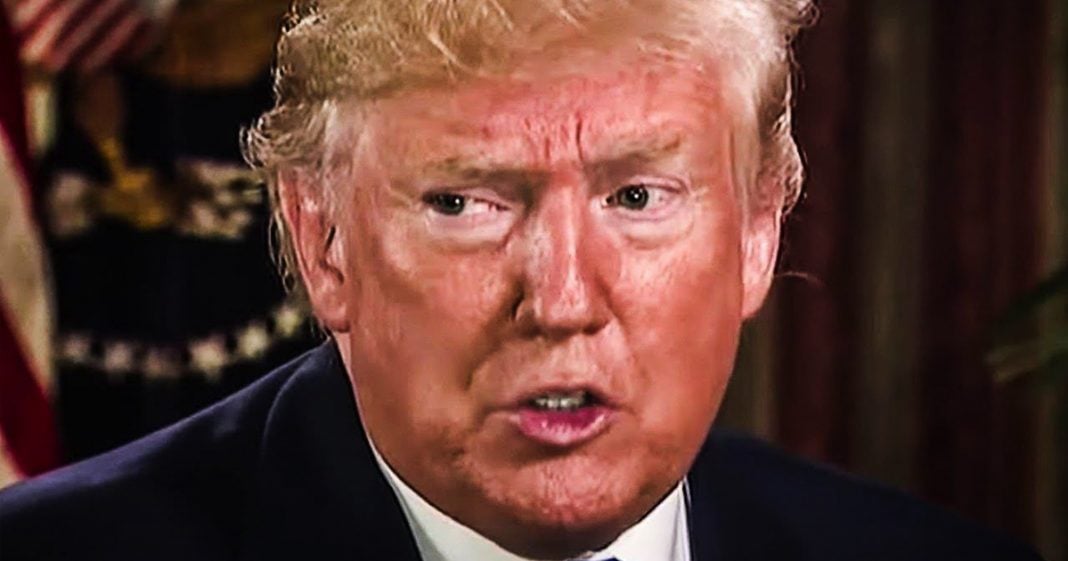 Donald Trump has been promoting a drug cocktail of chloroquine and azithromycin to combat viral infections, and has touted this measure on Twitter. The only problem is that this combination of drugs can lead to a fatal heart condition, and chloroquine can be fatal if the dosage isn’t exactly perfect. The President is trying to calm the public, but his lies are only making the problem worse. Ring of Fire’s Farron Cousins discusses this.

For many days now, Donald Trump has been touting a potential cure as he calls it, for the coronavirus via his social media and through his press conferences. This cure, as he calls it, is a mixture of drugs called chloroquine and the common antibiotic azithromycin. Now, chloroquine is the drug that had been mentioned a lot last week. It is the anti-malarial drug. It has shown a little bit of promise in people suffering from coronavirus and when combined with azithromycin in a test that they have done with about 20 people, it has been shown to reduce the presence of coronavirus in these 20 people that it’s been tested on. Now, 20 people is not an accurate medical test, folks, let’s get that out of the way right now. If you were to go and submit any kind of treatment to the FDA and say, yeah, we tested it on 20 people, it seemed to work okay.

Even as dysfunctional as the FDA is, they would laugh in your face and send you away and the president was still out there touting this which prompted medical professionals including those at the FDA to point out the fact that these two drugs when taken together can potentially be fatal because they cause arrhythmia in the heart. So they are both when taken in combination linked to a fatal heart condition and the president of the United States is out there telling people, heck yeah folks, we did it, we beat it. We found the treatment and doctors once again for I think the third time in the less than a week have had to come out and say no people for the love of God don’t do the thing the president’s telling you to do. This could very likely kill you. In fact, it has a better chance of killing you than it does of actually treating the virus.

Here’s the thing, chloroquine itself, if you take more than your regular dosage of this thing, that alone is enough to cause the fatal arrhythmia. Azithromycin on its own can also cause a fatal arrhythmia. When you take a dose that is, that is too large, combine these two things together, capable of producing arrhythmia on their own, and suddenly you’re looking at a very dangerous situation here. And yet that is what the president has been out there telling people to do. He tweeted out the following just a couple of days ago, he said, hydroxychloroquine and azithromycin taken together have a real chance to be one of the biggest game changers in the history of medicine. The FDA has moved mountains. Thank you. Hopefully they will BOTH (H works better with A, International Journal of Antimicrobial Agents) be put in use immediately. People are dying, move fast and God bless everyone.

Yeah, people are dying and yes, it is important to move fast, but it’s also important to move fast with caution. Right now, doctors are out there, they’re trying to throw everything they can at this virus to see what works. That’s how we know that chloroquine has shown a little bit of promise. But we also have to understand that because of our very lax regulations with pharmaceuticals here in the United States, a lot of drugs out there also cause some pretty serious side effects. And in many cases, these are life threatening side effects and when taken with another drug that can also produce life threatening side effects, you’re looking at a very deadly situation. But the president doesn’t care. He just wants his numbers to go up. He just wants people to think he’s doing something, even if that means promoting a bogus cure, that’s just going to get more people killed.