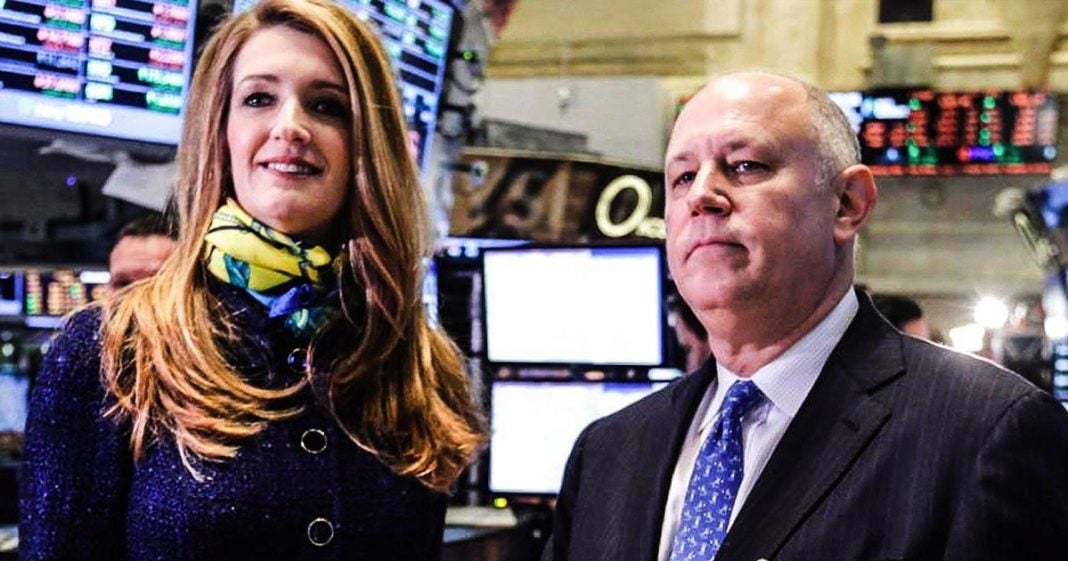 Jeffrey Sprecher, the CEO of the New York Stock Exchange, somehow managed to dump his stocks shortly before the market came crashing down. Sprecher happens to be the husband of Republican Senator Kelly Loeffler, who is now embroiled in a potential insider trading scandal that now clearly involves her ultra-wealthy husband. This is not a coincidence, as Ring of Fire’s Farron Cousins explains.

So there’s some new developments with the alleged insider trading scheme with some of the Republicans and apparently a couple of Democrats in the United States Senate. This one involves a man by the name of Jeffrey Sprecher and if you’re not familiar with Mr Sprecher, you should know that he is the CEO of the Intercontinental Exchange, which also happens to be the group that owns the New York stock exchange. And it turns out that Mr Sprecher shortly before the market crashed, dumped millions of dollars worth of stock, managed to save himself a lot of money. That’s really lucky timing for Mr Sprecher, right? It’s almost as if he knew somebody who had inside knowledge that told him to dump his stock and I wonder who that could be. Well in case you’re not familiar with it, Mr Sprecher here happens to be the husband of Republican, Georgia. Senator Kelly Loeffler, one of the people who last week was accused of insider trading by the media after it was revealed that she dumped a ton of stock after a confidential coronavirus meeting back in January, and her husband somehow knew to do the exact same thing.

Wow. What a lucky coincidence for the Sprecher/Loeffler family, right? No, folks, there is no way. You are delusional if you don’t think that Loeffler immediately got on the phone and told her husband to dump it all because they stood to lose millions and millions of dollars. Loeffler is thought to hold hundreds of millions of dollars, or excuse me, Sprecher hundreds of millions of dollars in stock and they dumped it right at about the same time. That’s not a coincidence. What Loeffler is doing here, is criminal. It’s criminal. There’s no other way to say this. This is clearly insider trading at this point, and Loeffler attempted to distance herself from the controversy late last week and over the weekend by saying that, no, no, no. Her stuff’s in a blind, blind trust. See, you can look at all my trades and she posted her, you know, page of trades which showed that yes, she dumped all the stock and also somehow purchased stock in video conferencing software.

You know the thing that everybody’s having to use now because they’re working remotely. Bull, bull, none of this adds up, Kelly. If this was all in a blind trust and you had no control over it whatsoever, then you must have the best, the absolute best financial advisors in the history of the stock market because not only did they manage to dump all the bad stocks and buy into all the stocks that were about to rise, but they’re also clearly psychic and clairvoyant and they can predict the future or you knew exactly was going to happen. You told your husband and you guys were in this together. Loeffler belongs in prison. That’s the bottom line here. Loeffler and Sprecher, the president, CEO of the New York stock exchange before all this is over, possibly even before the end of the year, these two, I promise you are going to be brought up on criminal charges.