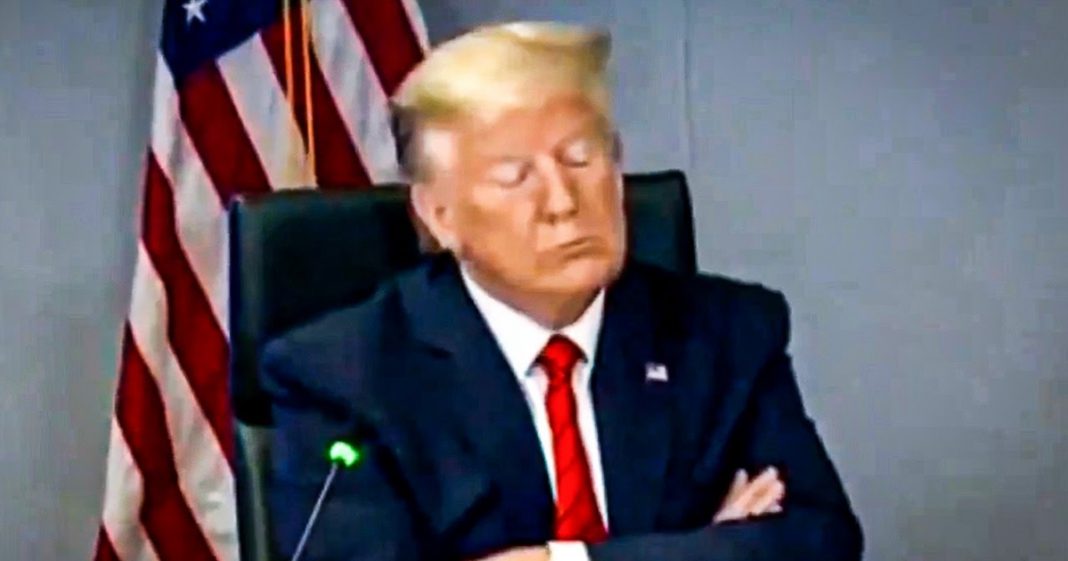 Donald Trump is facing renewed calls to resign from office after a video appears to show the President dozing off during a meeting about the Coronavirus. Trump, who loves to call Joe Biden “Sleepy Joe”, couldn’t keep his eyes open long enough to focus on what was being said, even as the entire country panics over the virus spreading across our nation. Ring of Fire’s Farron Cousins discusses this.

Over the weekend, a clip started circulating of Donald Trump attending a coronavirus meeting at the white house and a lot of people seem to point out the fact that Donald Trump looked like he was about to pass out during the meeting. Here’s the video clip.

Speaker:                                  Free up more space in hospitals, including respirators as Dr. Birx explained to me that many people that require a respirator is it because of a, of a surgery gone wrong and so this frees up more of our capacity across the board. I know it’s not lost on any of the governors here, Mr. president that by standing up FEMA, you, you now have essentially created a structure that every governor is very familiar with in dealing with disasters and emergencies.

You know, it’s unclear from watching that if, you know, the president was actually attempting to nod off a little bit if he was struggling to stay awake. But one thing is very clear, he didn’t care what anybody had to say during that meeting, right? The guy was just sitting there in his own little world, you know, blinking, closing his eyes, maybe he was, you know, not falling asleep. Maybe he was trying to take it all in. But, I don’t think that’s the case. I think this guy was just completely disinterested in anything that anyone had to tell him about the ongoing crisis that this country and world are currently facing. And that’s really not what we want in this time of leadership, right? We need somebody who’s going to go in there, understand things, relay them correctly to the American public and unfortunately, folks, we don’t have that in DC right now. We do not have anyone in that white house who appears to be either taking this seriously or who is able to communicate clearly with the American public.

I mean literally, the one thing we need, be honest with us and do everything you can, right? And we don’t even have that sitting in the white house. We have this guy who calls Joe Biden, sleepy Joe, who can’t even stay awake during a meeting about what’s happening in this country. And then this morning Donald Trump gets on Twitter, starts raving at the media saying that all of their coverage of everything has just been to hate on Trump. No, listen, when you start nodding off in the middle of a meeting, yeah, people are going to talk about that. When you refuse to be honest with us about what’s actually happening in this country, people are going to talk about that. It’s not because they hate you, it’s because you’re the president of the United States and those kinds of things are newsworthy. Nobody’s out there just talking about you only because they hate you.

They’re out there talking about you because you’re continuously screwing things up and you have since day one. This crisis was manageable. This crisis was foreseeable, and you, Donald Trump have failed the American public. There is no other way to say that. You knew back in January, back in January, and here we are coming up on the end of March at this point. We have at least five different States in this country that have instituted some sort of lockdown for their citizens. Businesses are closing their doors left and right, hundreds of thousands, if not millions of Americans are currently without a job. Whereas just a couple of weeks ago, everything was great, but it wasn’t, but they thought it was because you couldn’t get out there. You couldn’t take this issue seriously and you couldn’t tell the public the truth.