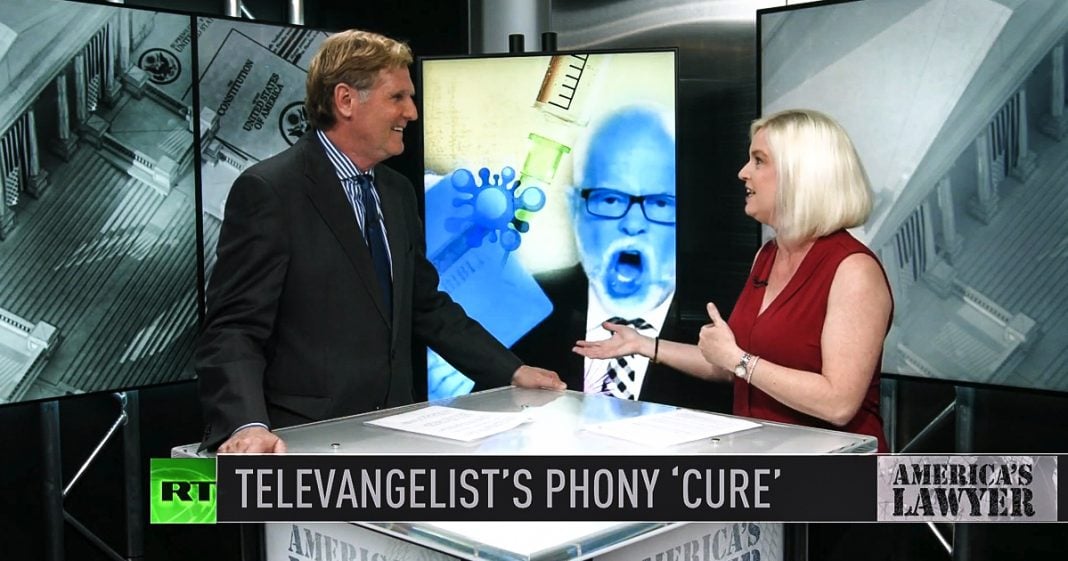 Mike Papantonio:             Modern society as we know it has quickly devolved into chaos as the coronavirus is triggering office and school closures, major event cancellations and harsh travel restrictions for Americans. But the televangelist, Jim Bakker, has been taking all this and making it into an opportunity. I have Mollye, Mollye Barrows with me to talk about. You actually have interviewed this, this nutcase in the past, right?

Mollye Barrows:                Yes. As soon as I saw this story I thought, ah, this is just so fitting because I grew up watching him on TV. I remember the scandals back in the 80s when he was busted for fraud and having an affair with his secretary and it led to accounting allegations that proved to a conviction. And so when he got out of prison for all of that related to his evangelical empire, his televangelical empire, if you will. It also included, you know, six flags over Jesus, some kind of a, an amusement park in Sout h Carolina. But.

Mike Papantonio:             So you interviewed him and he probably called you a demon after the interview or something, of course.

Mollye Barrows:                Right. So they sent me to go interview him and I interviewed him one day and then the next day I covered him as he was speaking at a local assembly of God church. And I met his new wife, Lori, and as he was up there in the pulpit, he’s like, the media is the devil. They’re all terrible.

Mollye Barrows:                They are and that’s exactly what’s going on. So his new televangelism business is based in Missouri and that’s where he has been on a show, his own show, the Jim Bakker show, simple to remember. And also on his website touting that he has a cure called silver sol. That’s one of the names for this where it can cure various strains of the SARS virus, which is what the coronavirus is, within 12 hours. Said, we haven’t tested on this particular strain, but we feel good about it and the government even knows that it can kill any pathogen that comes in its path, including HIV. And so the more you look into it, his whole website, his whole ministry, if you will, his angle is geared towards survivalism. It’s the end of times and he sells a whole array of products on his website. Which this if off now, by the way.

Mike Papantonio:             So this is almost so outrageous, it’s even hard to carry on a conversation.

Mike Papantonio:             I understand, politically, it was politically motivated. The department of justice, which is simply nowadays an extension of politics. But even back then they didn’t want to go after Jim Bakker because he had this huge following of evangelicals. Are they going after him now?

Mollye Barrows:                That is a good point. Now this all just started this week. We’ll see where it goes, but I think you’re right. I think that’s something that needs, there needs to be public outcry over this because he’s taking advantage of a vulnerable population. Exactly like what he got in trouble for back in the 80s and he’s marketing, taking advantage of their fear and their faith to line his pockets. That’s what it seems like to me. And I mean, it’s what he did before and it’s probably what he’s going to do again. But the FDA sent him a cease and desist letter as well because there’s a public state of emergency.

Mike Papantonio:             But, again, why are we going through all these hoops? Why doesn’t the department of justice go down there and do what they’re supposed to do? Put him, take him away and say the stuff that you’re doing violates some basic laws.

Mollye Barrows:                Right. But I, that’s interesting because when I was recapping all that back in, you know, the FTC wanted to investigate him or the FCC rather, immediately, almost as soon as he launched his ministry back in 1979. They found that he was basically misusing funds then. He wasn’t, he was, you know, asking for donations and then ended up spending it on personal items or to run his other businesses and wasn’t using it towards ministry like he promised.