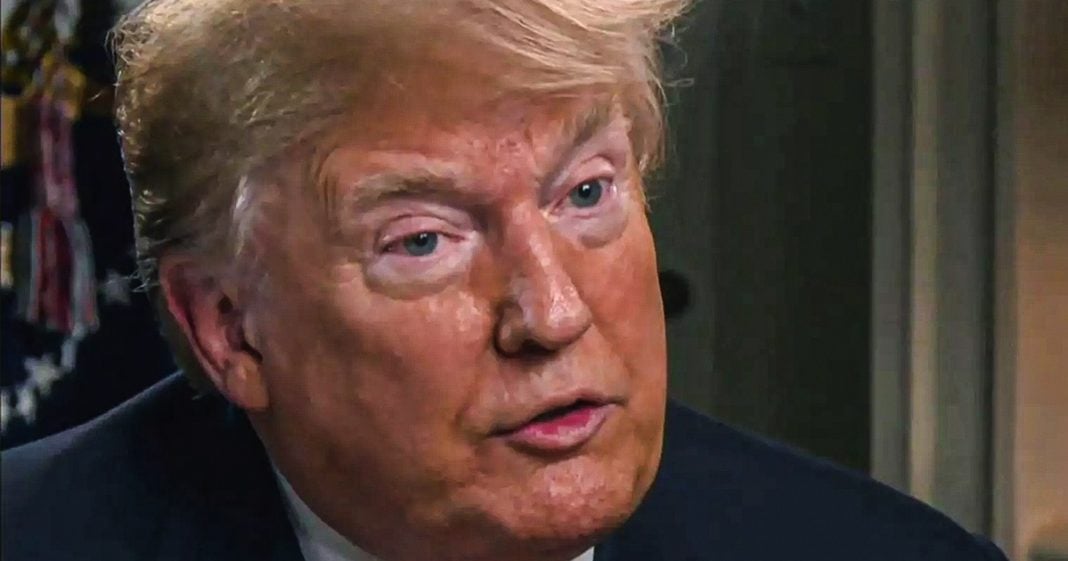 Donald Trump proudly proclaimed that his administration is using the Defense Production Act to allow other industries to start manufacturing much-needed medical supplies for hospitals. This would be a great move, but the only problem is that the President is once again lying to us. At least, that’s what his own chief of FEMA was forced to admit after the President made his boastful declaration. Ring of Fire’s Farron Cousins discusses this.

Right now, this country is suffering from a very severe lack of apply, supplies, excuse me, to address the current pandemic. We don’t have enough ventilators. We don’t have enough respirators. We don’t have enough masks or hand sanitizers or even soap to go around at the moment. And so Donald Trump for, you know, the last few days has been talking about the defense production act. Something that most people in this country have no idea what it is. But to put it in it’s simplest terms possible, the defense production act gives the administration the authority to go up to any company in the country and say, okay, you make cars, you’re Ford, you make cars. Well, until this is over under my authority and the defense production act, instead of making cars, you make respirators now. That’s all you’re allowed to do. Once the pandemic ends, once the supply shortage ends, you go back to making some Mustangs for the public.

That’s, that’s how the defense production act works and on Friday, Donald Trump said, we are using this and we are forcing corporations who make other products to instead make all these supplies that we’re running out of so that hospitals can actually treat people. Then on Saturday, kind of walked it back. He said, no, I mean, you know, we have a lot of companies right now that are volunteering, you know, to go out there and make these products instead. You know, Tesla’s volunteered. A vodka company here in the United States is actually switching over their distillery to make hand sanitizer instead of vodka. Corporations are doing the right thing all on their own. We don’t need to use the defense production act. After he literally told us the day before they were using it and they had forced corporations to do this. So on Sunday Jake Tapper had Peter Gaynor on his program, state of the union. Peter Gaynor is the chief of FEMA. He runs FEMA and Tapper asked him point blank, are you guys using the defense production act to force corporations to make the supplies that we’re running out of? And Gaynor said, no, we haven’t yet.

No. He said, no, we’re not doing that. Trump had told us two days before that they were doing it. That is a tool that this administration has that should have been put to use weeks ago and they’re not doing it. They’re going to let a couple of corporations step up, get some really great public relations benefits out of this. Right? I mean, all these companies that are doing the right thing, they’re going to see huge gains in public sentiment, but it’s still not going to be enough. We need these companies to switch their production methods over. And in case you’re wondering why, let me turn your attention to Spain for a second. Most people probably have not been paying attention to what’s happening there, but it was announced yesterday that doctors are literally having to take ventilators out of elderly patients who have coronavirus. They’re cleaning them obviously, and then they’re giving them to younger people. The people who have a better chance of surviving. That’s how short they are on supplies.

You know, Sarah Pailin famously told us about those death panels Obamacare was going to create. Well, guess what, folks? We have death panels now. These doctors are having to make the gut wrenching decision to pull these life saving devices that they don’t have enough of out of elderly patients to give them to younger people who may have a shot at living. They’re essentially condemning these people to die. It’s not a decision these doctors want to make, but it’s a decision they have to make and again, that’s currently happening in Spain and it’s going to end up happening here in the United States. We don’t have enough supplies. We have not flattened the curve. We’re seeing our number of cases rise every single day. Our hospital systems are already starting to feel overwhelmed. Donald Trump has to use the defense production act, and more importantly, he has to stop lying to the public about the actions his administration is taking to keep us all safe. So far, virtually none of the things that he has said he is doing, has he actually done.