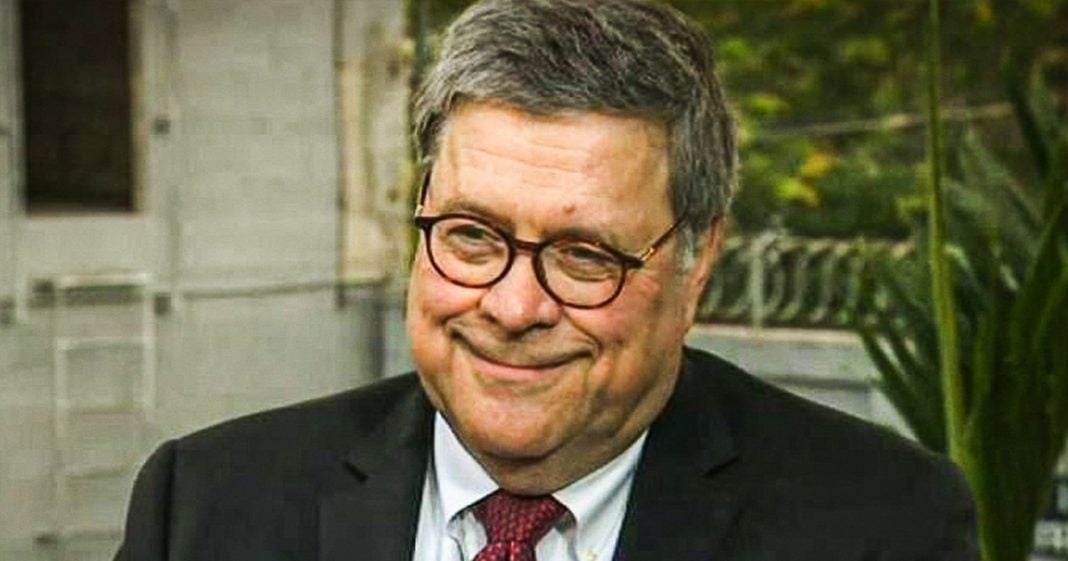 The U.S. Department of Justice, led by Attorney General William Barr, is hoping that they will be able to suspend the United States Constitution until the pandemic is under control. Specifically, they would like to have the authority to detain criminal suspects indefinitely, since the courts aren’t able to process these citizens during the pandemic. The U.S. is quickly becoming a fascist regime, and they are using the virus as an excuse to expand their powers. Ring of Fire’s Farron Cousins discusses this.

Attorney general, William Barr, isn’t one to pass up a golden opportunity and he thinks he sees one right now with the current pandemic here in the United States and in fact William Barr and his department of justice have put together a proposal that they’re going to send over to Congress asking them for expanded powers that would essentially allow them to throw the constitution in the trash, specifically any part of the constitution relating to a fair and speedy trial. What the DOJ is proposing right now is an absolute suspension of habeas corpus. They want to be able to detain people in this country, whether you’re an asylum seeker from another country or you’re somebody who stole a car, doesn’t matter to them. They want to be able to detain you in definitely in prison before you ever get the opportunity to go before a judge, before you ever get the opportunity to have a bond hearing.

And if you do manage to even get those things, they still want to be able to hold you in jail until at least after your trial. But if you get convicted, then obviously you’re staying in jail for much longer. Now, this is a growing problem here in the United States already because we do have court systems that are shutting down and as a result people who are getting arrested are not able to go in front of judges to make their case, to get bond, to be released pretrial, nothing. They’re sitting in jail waiting for that opportunity and we have no idea when it’s going to come and the justice department wants to make that permanent. The authority that they’re seeking would apply in any instance, whether it be a natural disaster, a pandemic like we’re seeing now, or even as they said, just acts of civil disobedience.

Anything that could lead to a courthouse being closed down, they want to be able to just detain people forever if that happens to be the case. Now, what’s interesting here too is that the DOJ has the authority to shut down court systems, so that’s why that little part that they included about acts of civil disobedience. Now, it’s not very often that an act of civil disobedience or a mass protest is actually going to shut down a court. But if the DOJ sees that happening, they can step in and say, okay, this court is shut down for the next two weeks. So everybody who gets arrested possibly as part of that civil disobedience, you’re just going to be sitting in jail for a couple of weeks until they can figure out what to do with you. And these are emergency powers that the DOJ is requesting and they want them to be permanent. Not just something that applies right now during the pandemic, but something that they can use forever.

This is not okay, this is not constitutional and luckily this would have to pass through the democratic controlled house of representatives and I would like to hope that the chances of that are pretty slim. But you never know. This is dangerous. It’s also not surprising. We expected Donald Trump and his administration and his DOJ to seek expanded powers during this crisis, but we cannot allow this to happen because if they get these powers, if they’re able to ignore these parts of the constitution of the United States, then it’s just going to snowball from there. And we can very slowly expect to continue losing more and more of our constitutional rights as Donald Trump attempts to turn this country completely into a fascist dictatorship.