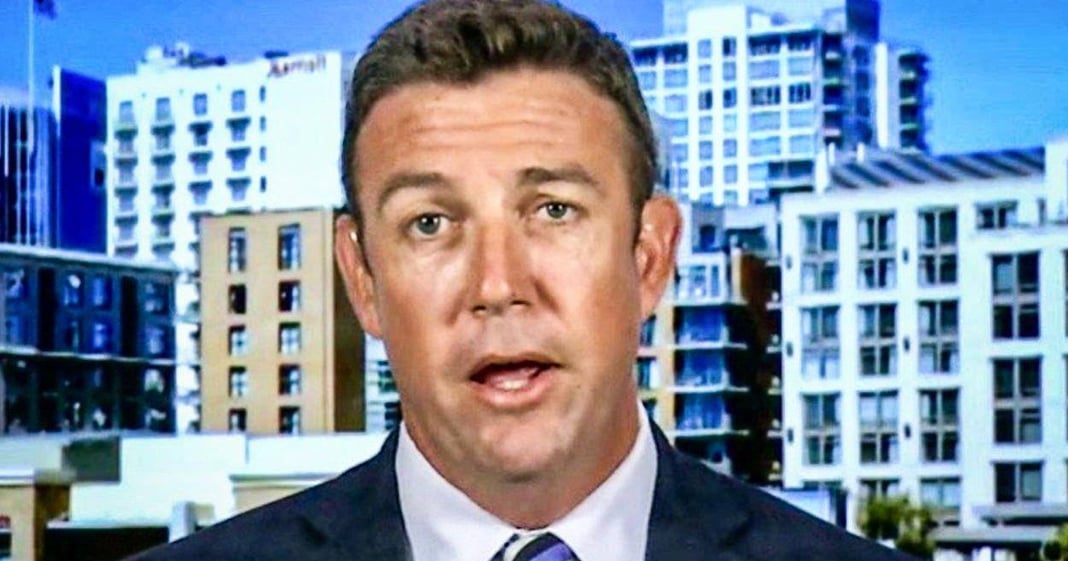 Former Republican Congressman Duncan Hunter is officially headed to prison after being sentenced to 11 months for campaign finance violations. The peculiar thing about the story is that the judge admitted that the theft of the funds by Hunter spanned an entire decade, so he’s getting roughly one month for each YEAR of stealing money. This sentence is far too lenient, as Ring of Fire’s Farron Cousins explains.

This week, a judge sentenced former Republican representative Duncan Hunter to 11 months in prison after it had been proven in court that Hunter had been basically stealing money from his campaign funds for nearly a decade, nearly a decade and he gets 11 months in prison for that. So roughly one month in prison, a little over one month in prison for every year that Hunter was stealing money. Here are some of the things that Dunker Huntin, Duncan Hunter, excuse me, spent money on. Fast food, movie tickets, sneakers, video games, Lego sets and play doh for the kids, groceries, dog food, utilities, luxury hotels, overseas vacations, plane tickets for their family pet rabbits and of course trying to cover up all of the affairs that Mr. Hunter was having. So yeah, there are some little mundane things here that don’t necessarily deserve years in prison. But then there’s plenty of other things that show that Duncan Hunter and his wife were using his campaign funds as their personal little piggy bank.

That is obscene, but not nearly as obscene as giving this man just 11 months in prison. He also has two and a half months before he has to turn himself over to begin his prison sentence. His wife is due in for sentencing next month. She had already pleaded guilty and as we had talked about, because we covered a lot of the things from this story as it had unfolded. At one point, Duncan Hunter tried to blame his wife for everything. Tried to say that she was the one who did all this. She was the one and then she ended up pleading guilty to spare her kids the pain of going through and having to learn about their father’s affairs. This man is a scumbag. I have no sympathy for him. I feel bad that the kids are losing their dad, but he is a bad human being and they do not need that influence in their life.

I feel bad that they’re going to lose their mother and to be honest, I do feel bad about the mother. Yes, she misused the campaign funds and yes, she broke the law, but perhaps some kind of house arrest, you know, home confinement type thing for her so that these kids don’t lose both of their parents would be more prudent at this point here. You know, she would not have been able to do this crime had she not been married to Hunter, which she will not be married to Hunter for much longer. So I think a little bit of leniency for her and a much harsher sentence for Mr. Hunter himself because here’s the thing about Duncan, he knew what he was doing and he got his wife to get involved with it. But he also came in front of the judge this week and asked for a little bit of leniency. He said, how about giving me home confinement?

You know, 11 months in jail for a decade worth of stealing. That seems a bit harsh. And even the judge was like, no, because you did this for almost a decade, so I’m giving you 11 months. The judge should of said, you know what, you have the audacity to come in front of me and ask for leniency when you’re getting a very lenient sentence anyway, I’m going to change it from 11 months to 11 years. That would be prudent and I think that would be very appropriate here. You stole money for 10 years, 10 years, folks. You used it to cover up affairs. You’re clearly a scumbag. Go sit in a decade long time out in a federal penitentiary. That would have been an appropriate punishment for Duncan Hunter. But given the fact that he’s only sentenced to 11 months, and I’m sure he’s probably not going to spend 11 months there, this jerk is probably going to be back home in time for Christmas this year, and sure the kids may like that, but the justice system in this particular instance failed. If Duncan Hunter hadn’t been a well-to-do white man, I can promise you they wouldn’t be measuring his prison sentence in months.