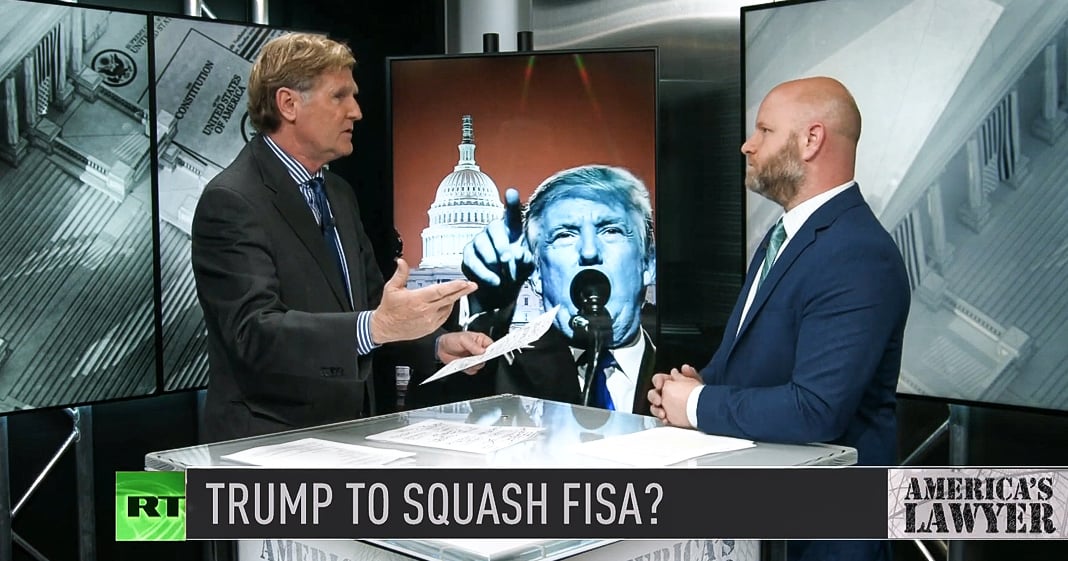 Via America’s Lawyer: Trump is going toe-to-toe with Congress over the renewal of surveillance tools related to FISA. Mike Papantonio and Farron Cousins discuss.

Mike Papantonio: President Trump might actually put an end to controversial government spying program that both Republicans and Democrats are trying to renew. Okay. You’ve, you’ve heard me say FISA is dead. FISA is broken. It’s shattered and there’s so many reasons that a federal judge, now this didn’t come, this didn’t come from the justice department. A federal judge said the system is broken and they were talking about the idea that, the, they actually listed all the things that have gone wrong. The, get get it quick. Don’t actually do your investigation, get it quick. Lack of candor. Political motivation was high on that list. Take it from there.

Farron Cousins: Well, what we’re seeing right now is you’ve got Republicans in the House and Senate and Democrats, excuse me, that are both saying we need to expand, extend these powers that expired actually on Sunday. They haven’t finished the bill in the Senate yet, but they want this spying power. They want the FISA still there for them, which was expanded greatly under the Patriot Act and the post 9/11 surveillance state. But even Trump now is looking at this and saying, listen, I feel like I was wrongly surveilled and so I don’t know that I’m going to do this. And so his reasoning may be off on it. You know, that’s a whole different argument. But he’s right to say that this shouldn’t exist. And because the, you know, after 9/11 we expanded FISA greatly and essentially what it is instead of having to go through and prove your case to the FISA judge and say, I absolutely have to have this, this wiretap or this surveillance and you have to show why. After 9/11 it became, I think this guy might be doing something bad. Can you just sign off on this?

Mike Papantonio: There’s no, ACLU is all over this. They hate it. They’ve hated it forever. People who understand it should hate it. There are 11 federal judges that are picked by the Supreme Court. They say, you’re the FISA judges. Now here’s what’s happening. This is according to, you know, what basically the ACLU argument. There’s no, there’s no self policing at all. There’s nobody looking over what, what is this FBI organization doing to get the, to get the warrant? There’s a lack, a huge lack of accuracy in the information that they’re putting in front of these judges. There’s no candor. Words that this is the list, that there, there is a political, there’s a political element to it, to where each party is using the FISA courts to go after the other party in some form or fashion. Now that’s where, that’s where Trump lands and I agree with you. His reasoning is, look, it’s all about me. I didn’t like the way they treated me. But the truth is this is a broken system.

Mike Papantonio: It’s a broken system and to have 11 judges that rely on the feds to tell them the truth. We found out in the Carter Page, they were making stuff up. The Carter Page case is a example, isn’t it?

Farron Cousins: Well, it is, and another problem that we have with the FISA courts today, again post 9/11, was that they had actually allowed for a time, you could go out there and start your surveillance without a FISA order. And after that you had about 72 hours to go ahead and tell us why you were going to do this, but you could do it without authorization. You know, FISA has been around for a long time and yes, it’s been abused for a very long time, but never to the extent that we have seen it since 2000, 9/11.