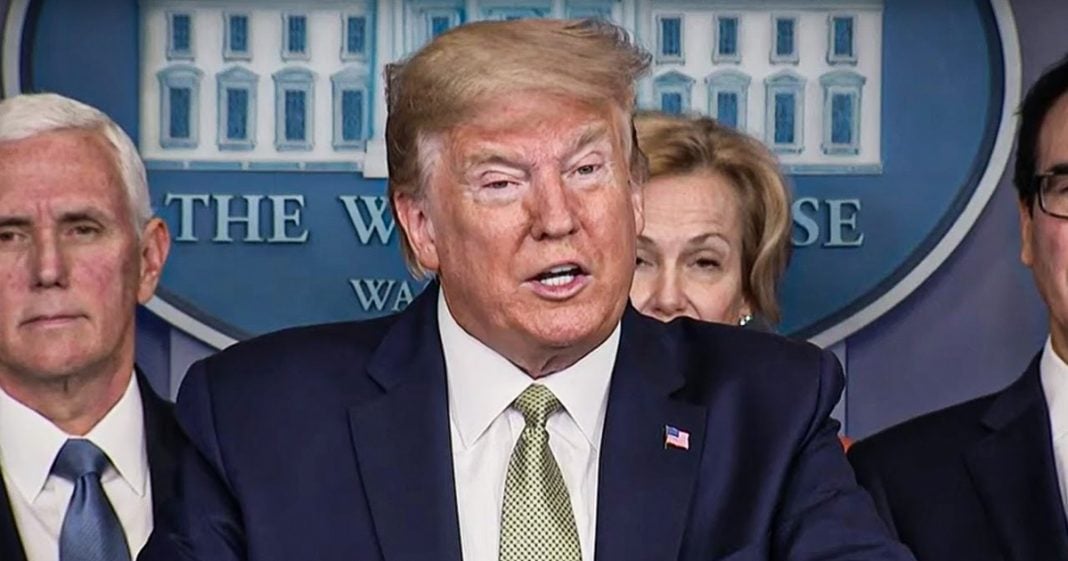 It has only been two weeks since Donald Trump referred to the Coronavirus as a hoax, but the President this week claims that he always took the pandemic seriously, starting on Day One. This is an absolute lie, and that’s about all we’re going to get out of this administration. The President has routinely lied to our faces about what is actually happening and there’s little trust that he can do things correctly. Ring of Fire’s Farron Cousins discusses this.

Just two weeks ago, Donald Trump appeared on Fox news telling us that this whole coronavirus thing was a hoax and that it was going to be gone in a couple of weeks and that the number of deaths here in the United States was going to be “close to zero.” Well, we’ve now passed that number, got thousands of cases now here in the United States, I believe we’re up into the hundreds with the death toll and it only seems to be rising. So on Tuesday, Donald Trump gave another one of his little press conferences where he said the following, he said, I’ve always viewed it as very serious. There was no difference yesterday from days before. I feel the tone is similar. So what he’s saying is that he’s always taken the coronavirus serious. He always thought this pandemic was the real deal. Even though, again, two weeks ago he sat there on Fox news and literally called it a hoax.

But he, he really actually thought it was serious folks. You know, this is not the first time or second, third, fourth, fifth, sixth, seventh, whatever time that Trump has said something on video and then later on tried to say like, no, I never said that. We have the frickin video, dude. We, we’ve all seen the clips. We’ve read the transcripts. We know that you said this and now here you are once again in the middle of a pandemic when we need leadership, once again lying to our faces because you think we’re morons. I want everybody to understand that that is why the president does this. He knows there’s videotape evidence to contradict him, but he still lies to our faces because he thinks we’re too stupid to remember that. So you better remember that. This man thinks he is smarter than you. This man thinks you’re a dullard. This man thinks you don’t know any better and that’s you’re easily conned and if you support him right now, then he’s right. He is absolutely right about you, if you still look at him and say, that’s my president. Yeah.

But that’s not what’s happening here folks. Donald Trump has never taken the threat of a pandemic seriously in his life. Two years ago, he disbanded the pandemic response team. Right? That group of intelligent human beings that were there to protect us from things like this and to strategize in case a virus ever hit our shores like this. Two years ago said, go away. We don’t want you. So he wasn’t taking this thing seriously even before it became a thing. Back in January, he dismissed reports from health and human services chief, Alex Azar, dismissed him. His aides were actively trying to convince him that this wasn’t a big deal. Jared Kushner has been in his ear telling him that this isn’t a big deal. It’s all going to blow over. Fox news is out there telling him that, oh, this is all the Democrats. They’re out there just trying to impeach you again with this said, former Fox host, Trish Regan. I think she’s been permanently fired. Maybe she’s still benched. Either way, she said that, and Trump’s been right there applauding along with them repeating their false claims to the media, repeating their false claims to the public. This is not a man who has ever taken this thing seriously, and it certainly isn’t a man who we should trust to get us through it.