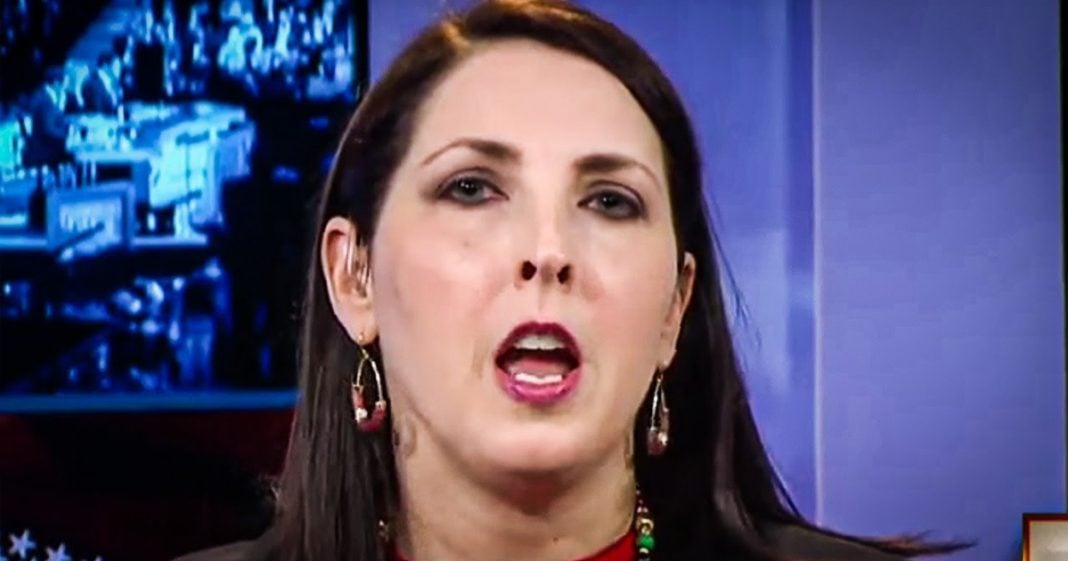 RNC Chairwoman Ronna Romney McDaniel has been funneling contracts to her husband and to people who donated to her campaign to become chair of the Republican Party, according to new reports. Republicans should be throwing a fit about their Party Chair using their money to enrich herself, but in today’s GOP, that’s become all-too common. Ring of Fire’s Farron Cousins discusses this.

A new report out on Truthdig this week explains how RNC chairwoman, Ronna Romney McDaniel, has been using her position as the head of the Republican party to enrich herself, her family and her donors. Here’s what’s been happening, according to this new report, Ronna has been directing contracts to her husband’s business, his insurance company. She has been sending them all kinds of contracts, which actually not just puts money in her husband’s pocket, but by virtue of being married, puts money back in her own pocket. And then of course the report points out that she is giving contracts to people who donated to the Ronna for chairwoman Super PAC. She hasn’t used the Super PAC in a long time. It’s been around since I think at least 2015, back when she was running for state party chair. But she keeps it around so people can dump some money into it in case she needs it in the future.

And as this report points out, once they do put money in there, she then rewards them with lucrative contracts just like she does with her husband. Now, here’s the thing, the RNC does have a conflict of interest provision in their bylaws or charters or whatever you want to call it, that would prohibit this kind of spending. But Ronna controls the party. So who’s going to call her out on it, right? She’s the one at the top. She controls everything. She can fire you if you make her mad. But the question is, why are the average Republicans out there not up in arms over this? Why are they not furious that the leader of their party is out there misappropriating funds and putting them essentially back into her pocket? If these reports are to be believed, which I have every reason to believe that they are. They should be furious. They should be demanding her resignation immediately because this is full blown corruption.

Unfortunately, the RNC spokesperson, Mike Reed had this to say, he said, you know, this is just an attempt to make innocuous RNC spending items seem scandalous. Here’s the thing, Mike Reed, I know you work for Ronna. I know she’s your boss and she has the ability to fire you if you were to go out there and say something she doesn’t like, it’s in your, your, your charter of your party. This kind of thing is not allowed. I mean, plain and simple, she gave money to her husband’s company and I’m willing to bet since he owns an insurance company, that it was not the only insurance company in the country at the time. There are plenty of those. You can’t turn on your television without seeing a commercial for an insurance company and they all offer a wide array of different insurances. So yeah, I’m sure she could have found somebody else instead of self-dealing. But that is exactly what happened here. So Republicans, if you’re watching this, please understand that, yeah, your party is corrupt all the way to its core and it starts at the top with Ronna Romney McDaniel.