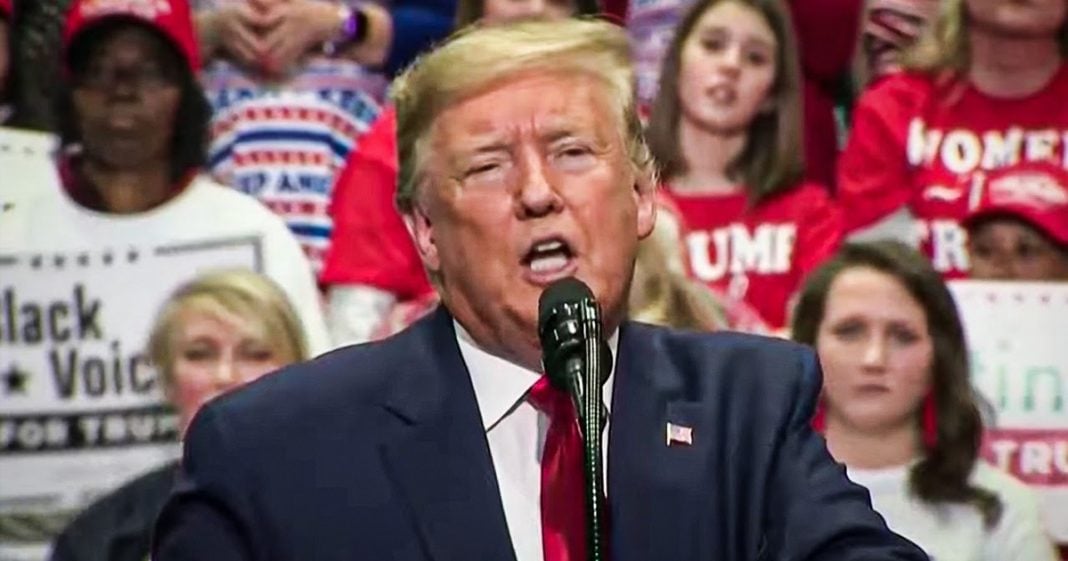 A psychiatrist has written an op-ed in the San Francisco Chronicle explaining how Donald Trump has managed to manipulate the brains of his followers. To put it succinctly, the President is activating the most primitive parts of his supporters’ brains by convincing them that this is a fight for their very survival, and they will lose that fight if they don’t support him. Ring of Fire’s Farron Cousins discusses this.

The San Francisco Chronicle ran an op-ed this week by psychiatrist, Dr. James Gordon, and in this op-ed, which is titled, Did God send Trump to save us? Gordon examines the claim by Republicans, most Republicans, not all, but most of them do think that God plays a hand in selecting the president of the United States, and of course they do believe that obviously with Donald Trump. So why then, why Trump? Right? Why has Trump been able to convince these people that he was in fact sent by God and Gordon thinks he has an explanation for this and that is that Donald Trump is a master manipulator, and that is true, but he has managed to manipulate the most primitive and reptilian parts of his supporters brains, specifically the part that is focused solely on survival. That most basic primitive instinct, live or die, and he has managed to convince them that if they do not support him, if they do not get behind him, that could mean no survival for them. I got to read a couple of excerpts here because this is wonderful.

Trump teaches by provocation and contraries. His words, facial expressions and conduct, reflect and amplify the least evolved parts of our biology and behavior. The remorseless struggle for survival that is the highest achievement of the reptilian part of our brain and the fears rages and insecurities that flourish in primitive parts of our limbic system, our emotional brain. Trump reacts to minor challenges as if they were life threatening, preoccupied with self protection and the annihilation of real or imagined enemies. He is cruel to the vulnerable, submissive to the powerful, fearful of the different. Like an infant, he demands continual attention and throws tantrums when frustrated or ignored. He engages higher powers of mental functioning primarily to justify his actions, armor his vulnerability, rationalize conspiracy theories and exaggerate his power. This might be the most accurate description I have ever seen of both Donald Trump’s supporters and of Donald Trump himself. And once again, this is coming from a mental health professional. Dr. Gordon here is in fact a psychiatrist. He is a guy who understands how the brain works, how personalities work and what they say about somebody. This is the kind of person that we probably need to listen to, but here’s the issue. We know how Donald Trump is manipulating his, his followers by, by appealing to that primitive part of the human brain.

The only thing he didn’t answer is how do we break it? How do we stop the manipulation? How do we get people to understand that they are being manipulated? Unfortunately, that is not a question that I have an answer to and unfortunately it is not one that Dr. Gordon gave us an answer to. It’s something that has happened all throughout human history. I mean, we saw it happen in Germany, right before World War II. It was the same thing. Now Trump is obviously not quite at that level, but he’s using the same kinds of tactics. We saw it during the Russian revolution. We’ve seen it in revolutions all throughout human history. You get one or two people to step up in this position of leadership, tell people this is a fight for survival and that they have to go and attack this group or that group, the others, whatever they may be and that’s how they gain and retain their power. So I don’t know if it is possible to break people out of the spell. It’s been happening for thousands of years all across this planet. But people need to understand, and we do need to continue to try to educate, and we do have to continue to talk about these kinds of things because it is harmful, not just to the country, but to the individual themselves.