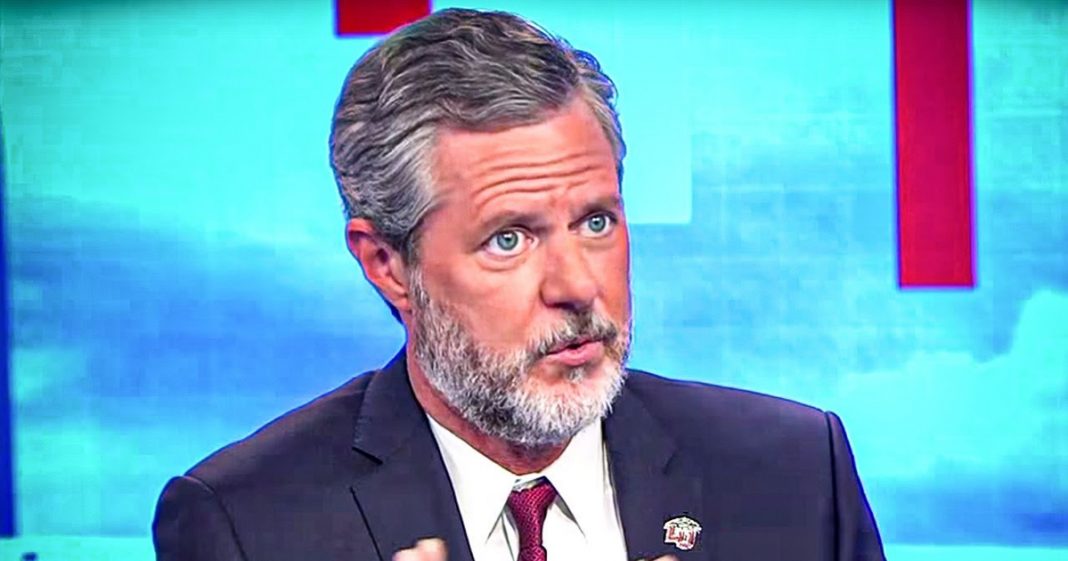 Religious Right leader Jerry Falwell, Jr. said this past weekend that the coronavirus is actually a weapon sent from Asia to hurt Donald Trump’s presidency. He believes that it was either the Chinese or the North Koreans who developed it, or possibly a combination of the two countries. Ring of Fire’s Farron Cousins explains how rhetoric like this is extremely damaging during times of crisis.

Religious right leader Jerry Falwell Jr announced on Fox news this past weekend that the coronavirus, COVID-19, might actually be a weapon created by the North Koreans and the Chinese or maybe one or the other, perhaps it’s both working together. He doesn’t know that yet. We’re good there. But they created this and sent it over to the United States to harm Donald Trump’s reelection chances. This is exactly what Mr. Falwell Jr had to say. He said, you remember that North Korea leader promised us a Christmas present for America back in December. Could it be they got together with China and this is that present? I don’t know, but it really is something strange going on. Could COVID-19 be the Christmas gift North Korea’s leadership promised America back in December?

Let me, I’m going to go ahead and answer this for you, Jerry, no, no. That, that’s the extent of the answer there. No, and you seem like you might need some help. You know, like maybe it’s time to go ahead and schedule a cat scan. Let’s see what’s kicking around up there in your head because this isn’t a normal way to think, folks. This is cuckoo levels of conspiracy theory happening here and Fox and Friends, the show that Falwell Jr appeared on to say these things, just let it happen. Just let him say it. They didn’t disagree, they all, mhm yeah, interesting. Good point. Yeah. Maybe. Who knows? No, folks, this is not a conspiracy. This thing was not artificially and created, created in a lab and spread out through the population of the globe to kill people off. This was an unfortunate disaster that has now spread like wildfire across the globe and we need to do something about it.

Nobody went out there, created this virus, and started infecting people in Asia to try to hurt Donald Trump. I mean, how self-important do you have to be to think that there is a global conspiracy against you? That is nuts, especially with regards to what we’re talking about today. Now, I am sure there’s probably global conspiracies against world leaders all over the place, but I’m also willing to bet that none of them include killing off thousands or even possibly millions of people around the globe just to zing it to the American leader to make him lose his reelection. That’s crazy and so as Jerry Falwell jr, who by the way also announced that at his Liberty University, they absolutely will not be closing down. They’re not going to cancel classes. So for all of the people attending Liberty University, you have my deepest sympathies, not just because your classes won’t be canceled and you will be exposed, but also because you attend Liberty University.

Maybe that’s something you ought to rethink. But folks, these religious right leaders, and we have talked about them a lot recently because they seem to be getting worse. They’re out there actively trying to spread this propaganda, sell you phony products that they claim can kill the virus because it puts more money in their pockets. When Jerry Falwell Jr goes out there on Fox news and blindly supports the president that makes the viewers of those programs want to send their kids to Liberty University. That’s what this is about. This is always a big cash grab for these religious frauds. There is nothing religious about a guy like Jerry Falwell Jr or his late father or Pat Robertson or Jim Bakker or any of these freaks out there on our televisions. Each and every one of them is a fraud. They are in it for the money and there is not a single thing Christian about anything they do in their lives.