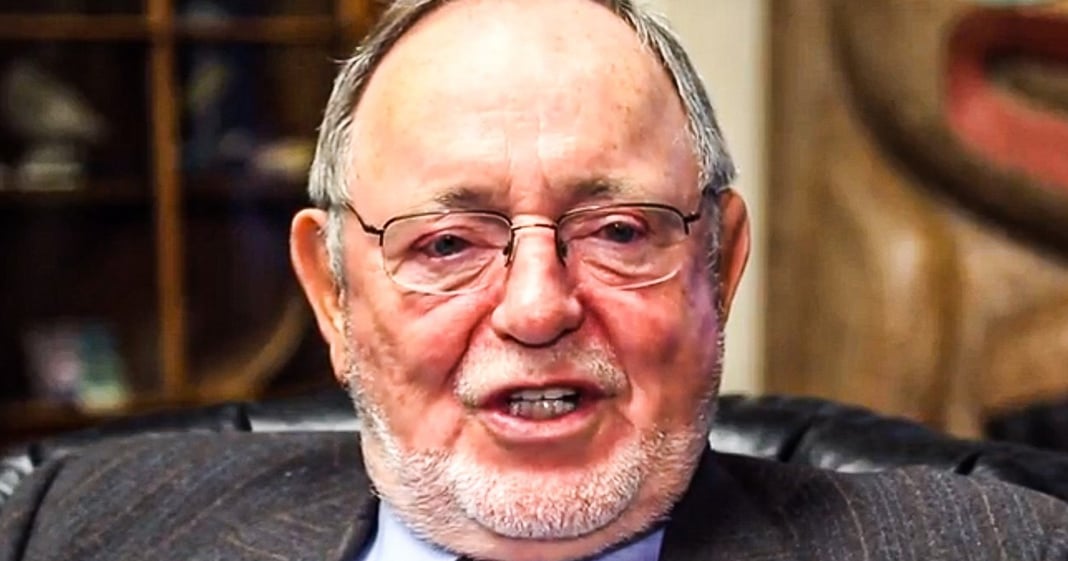 Republican Congressman Don Young from Alaska doesn’t think that senior citizens should be too worried about the pandemic, and he’s actually encouraging them to continue going out and living their lives. This is dangerous, and possibly even deadly, advice, and the Congressman is fully aware of how serious this situation is. Ring of Fire’s Farron Cousins discusses this.

Late last week at a gathering at a senior center in the state of Alaska, representative Don Young, who is a Republican in the house of representatives, but also an 86 year old man told the gathering of senior citizens at this senior citizen, senior center that they should ignore the warnings and they should continue going out and living their everyday life as if nothing is going on in the world. Here is exactly what Don Young told these senior citizens word for word. They call it the coronavirus. I call it the beer virus. How do you like that? That’s, that’s actually what he said. That’s a direct quote. It attacks us senior citizens. I’m one of you. I will say we have to as a nation and state go forth with everyday activities. He then said that the media has blown out of proportion what’s actually happening and that this thing isn’t anywhere near as deadly as some of the other viruses we have floating around out there in the air.

So, so go on senior citizens, go out, gather in large groups. Go out, mingle, shake hands, kiss people if you want to because hey, you’re old, you’re going to die anyway, probably. Right Don, is that what you’re thinking there? And then this happened last Friday evening. Then on Monday, Don Young’s office actually announced that they’re all going to be working from home for now on for the foreseeable future. They’re not going to go out and meet in public and that includes Don Young himself. So even though he’s telling these other senior citizens, go out there and live your life, don’t be afraid of anything. He then went back to his office and said, guys, I’m terrified. Everybody works from home. Nobody comes in. We’re doing everything online. We’ve set up on our website, a coronavirus, you know, list of things to do and not to do for people, which includes not going out and living your regular life like he just told the seniors to do. So he lied to him. He lied to the most vulnerable group in this country, to this virus.

This man should be removed from office immediately. I mean, those seniors that he just spoke to, those are his constituents. They need to understand that he just did them a great disservice and put them in potentially deadly danger because of this horrid advice that he gave them. And again, this was last Friday folks. There is no longer any excuse, right? We know the rules, we know what to do and what not to do and we have for about two, three weeks now. So if you’re still going out there and telling people nah, it’s okay, go ahead and meet in large groups. Go ahead and lick the door knobs if you want. No, stop it. Stop. We all have to take precautions. This thing is spreading faster by the day. We are not flattening the curve. We’re making it worse. Look, I’m down here in Florida, live in a beach community.

I can’t get home in the afternoons without sitting in traffic forever because our city is packed with tourists right now down here for spring break. Other counties are closing their beaches throughout the state, but not my moron County here. Nope, we’re keeping it open. Come on people from all over the country bringing your viruses and germs. And also by the way, eating up all of our groceries, even though there’s a massive grocery shortage. Yeah, that’s totally super awesome, folks. Listen to the experts. Listen to what the centers for disease control and health and human services and doctors out there are telling us to do. Don’t listen to Republican politicians. Take this thing seriously or else you’re going to put thousands upon thousands of lives in danger, and that’s on you. And you may not care about that, but I can promise you the loved ones of the people who fall ill with this, they are going to care. Please don’t be idiots and for the love of God, don’t take the advice of Republicans.