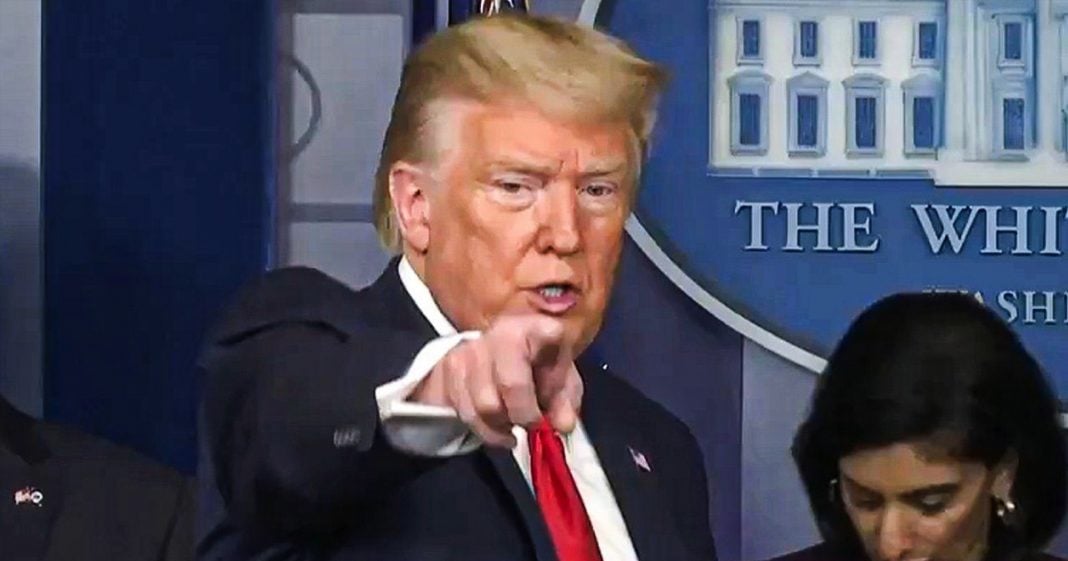 Donald Trump was asked directly by a reporter on Wednesday whether his administration thinks that using terms like “Kung Flu” and “Chinese Virus” to describe the current pandemic is prudent, and he responded that it was absolutely OK to use those terms and that even China would agree with him. The xenophobia that this administration is releasing against Asian Americans is not surprising, but it is certainly dangerous. Ring of Fire’s Farron Cousins explains what’s happening.

Not unlike his counselor, Kellyanne Conway, Donald Trump yesterday was also asked point blank by a reporter if it was okay for his administration to use terms like Kung flu and Chinese virus to describe COVID-19. Was it racist? The reporter straight up asked him to use these terms and well, here’s what Donald Trump had to say about that.

Reporter:                                And then my second question is there are some, at least one white house official who used the term Kung flu, referring to the fact that this virus started in China. Is that acceptable? Is it wrong? Are you worried that, that having this virus be, being talked about as as a Chinese virus that that might.

So it’s totally not racist to call it the Kung flu. It’s not racist to refer to this thing as a Chinese virus because as Trump just told us, they would probably even agree with us on this. I’m, I’m willing to bet that they wouldn’t. I’m willing to bet they would actually want to call it by the name that it’s called, you know, COVID-19 or coronavirus. You know, because, because that’s what its actual name is. But Donald Trump has never been one to call things by their actual name. He always has to add some kind of insult or in this case, racial slur to them. And let’s be honest folks, that is what this is. This is a racial slur against Asian people across the planet. And the president is sitting up there defending it, saying that this is okay at a time when attacks against Asian people are rising all over the world.

The NYPD is being inundated with phone calls and videos of Asian Americans being physically attacked, being verbally attacked. Reports coming in from schools of children of Asian descent being harassed by their classmates over this, and it’s all coming from the president of the United States who is a massive racist. There is no other way to classify this folks. He knows the name of this thing, he called it that for weeks until he saw Fox news where you have Sean Hannity and you have Tucker Carlson out there calling it the Chinese virus calling for more xenophobia. Inciting all of this anger and hatred and rage and violence against Asian people, both here in the United States and abroad because that’s what they want. They always need a scapegoat. You know when Trump ran for election that scapegoat to tell you why your life sucked was because of Mexican immigrants. So let’s build the wall and your life will get better. Well, it won’t. But people bought into the scapegoat idea. Same thing with Reagan in the 1980s with the welfare queen, the black people on welfare. It was a racist attack, but it helped him explain to people, your life only sucks because there’s black people out there getting welfare and living like Kings and Queens. And it worked.

And now with Trump’s disastrous response to the coronavirus, he’s trying to say, well, China did this thing, folks. It’s not me. What the hell was I supposed to do? They sent us the Kung flu. And people say, you’re right. It’s the damn Chinese, isn’t it? No, folks, the reason this thing has spread like wildfire here in the United States is because the president of the United States is a moron. He disbanded the pandemic team two years ago. He didn’t take this thing seriously. He thought it was a hoax. He allowed the stock market to crash because he wasn’t taking it seriously. And now he’s trying to blame somebody else because that is the only thing this man knows how to do. He is never going to take responsibility for his failures. So we’re the ones who have to hold him responsible and the opportunity to do that is coming up rather quickly in November. That is literally our one shot to hold him accountable.