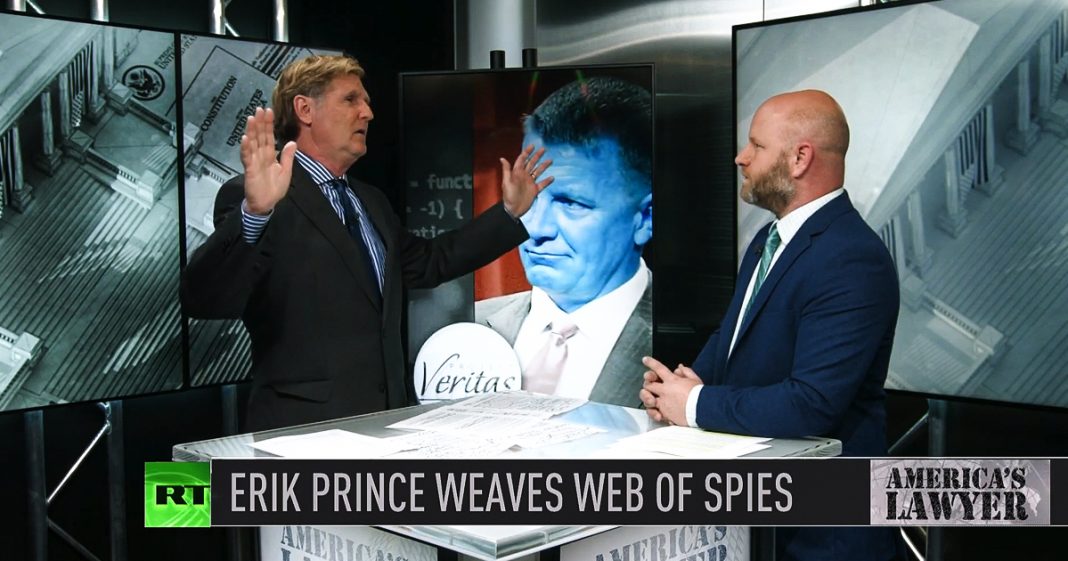 Mike Papantonio:             Blackwater founder, Erik Prince, has been spying on liberal organizations with the help of the folks at Project Veritas. Joining me to talk about that is Farron Cousins, editor of the trial lawyer magazine. As, you know, as I look at this story, no surprises, but I kind of have a different, I might have a different angle on this story and that is sometimes you have, you, you have a group like Veritas, which I mean completely awful bunch when we look at how they operate. When we look at what their political leanings are and what they’re willing to do to, to, to follow through with their narrative. Right? But, you know, we just did a story on some really good results that came from this that came from Veritas where he exposed ABC news and it was a startling story. I mean, it made the, it made corporate media look like the, you know, numb nuts that they have a, that they have a tendency to be some sometimes. But you add, you add Erik Prince to the story and it gets really ugly real fast.

Farron Cousins:                  Yeah, it does and what we’re finding out now is that Erik Prince, since about the 2015, 2016 primary and election season, decided that he was going to start reaching out to former spies for the United States and former British spies to hire them and then work with Project Veritas to send these spies out there to not only gather information, labor unions was a big one they wanted to, you know, spy on, try to get any kind of damaging information. But also to teach Project Veritas how to do these, you know, clandestine activities like audio recording and infiltration. I mean, really just purely sinister, like the plot out of a bad movie type plan.

Mike Papantonio:             Okay, let me run somebody, we’ve talked about this before. We, I think we both agree on this. Why in the world doesn’t the progressive left do something to push back? And what, I say that knowing that the progressive left has this thing, okay and here it is. They’re not willing to jump in and jump behind things that look like they actually may yield some good results unless it’s their idea. You remember Air America?

Mike Papantonio:             Okay. I was involved with Air America. We had the most incredible lineup of ever, ever, ever assembled incredible lineup of progressive talkers. But when we went to the liberal left to say, you know, we need help funding this, it was ah, ah, we don’t have money for that. What is your take? You hear them every day. You hear Hollywood and celebrities in the news every day running their mouths. But when you say, how about pulling out some money out of your pocket book? It’s not quite so easy is it?

Farron Cousins:                  Well yeah, and when you see stories like this. I mean, Erik Prince is a billionaire. He came from a billionaire family. Project Veritas started off on a shoestring budget and now they get tens of millions of dollars a year in donations and they’re able to do things like this. Send out these spies to infiltrate these groups and yet there’s nothing on the left that even comes close to being this kind of organized and it is because of the money issue.

Mike Papantonio:             I mean, it’s a disconnect. I honest to God, there is a term in the business when you’re trying to, when you’re talking to a liberal organization, if it’s not their idea, okay. If it’s not an idea that Soros came up with or the DNC came up with, it doesn’t fly. How about the time that we tried to, we tried to create a network to answer rush Limbaugh. Okay. Now, first of all, we ran it by everybody involved in political and progressive politics and then we came up with Air America, which was extraordinary. Not one bit of help from Progressive’s. And so I don’t know, I guess we’re, I suppose we’re going to always be outgunned by organizations like Veritas.

Farron Cousins:                  Well, and what people need to understand too about the Air America days, you know, yes, we’ve reached out to a lot of, you know, these, these millionaire, billionaire leftists. The people that the right claims are funding everything. They didn’t give a dime. The people who bailed out Air America time and time again were actually the trial lawyers.

Mike Papantonio:             I reminded, I remember writing big checks for millions of dollars with no help from the people running their mouth out in Hollywood or the celebrities, like, you know, Rob Reiner types that are always real good at a vocal, at a narrative. But you say, Rob, how about kicking in some money? Okay.

Farron Cousins:                  Well, and when they don’t, when they allow the right to become what it is now with your Erik Prince’s and your Project Veritas, they’ve already lost the game. We can’t fight something like this and it’s grown out of control.