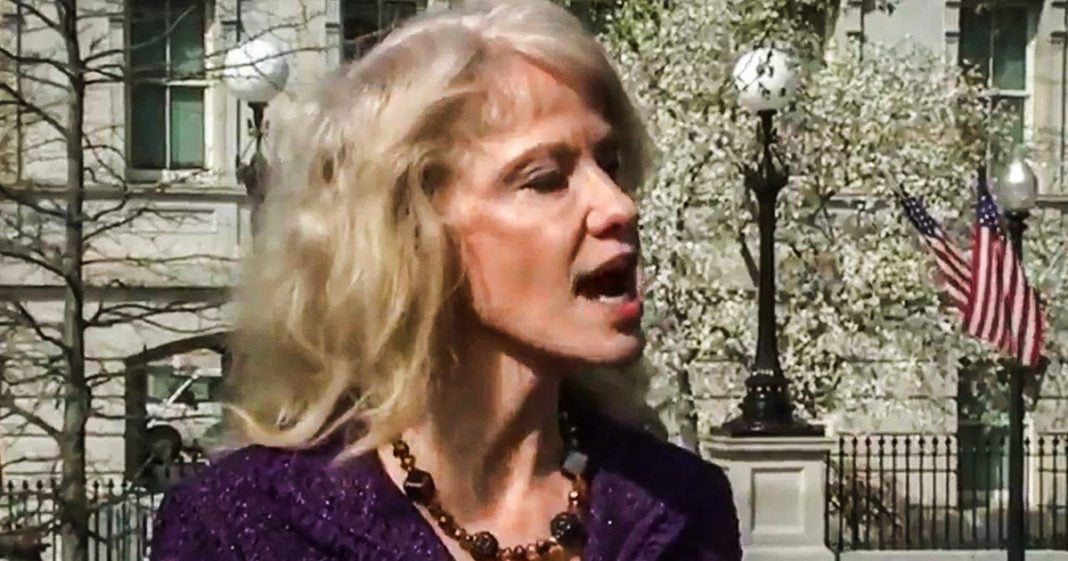 Kellyanne Conway grew visibly frustrated and angry when asked by a reporter on Wednesday about reports that a White House staffer has been referring to the pandemic as “Kung Flu.” This is a slur against the Chinese, and the White House has some explaining to do. Unfortunately, Conway decided to ignore the question and instead claimed that she can’t be a racist because her husband is of Asian descent. Ring of Fire’s Farron Cousins explains what’s happening.

A couple of days ago, there was a report that a staffer inside the white house had referred to the pandemic as the Kung flu. Now, this actually came after Donald Trump had repeatedly in multiple different tweets referred to it as the Chinese virus. So yesterday in a little impromptu press conference, Kellyanne Conway was asked point blank about the staffer who allegedly referred to it as the Kung flu, and rather than answer the question, Kellyanne Conway did what she always does and grew exceptionally irate at even being asked this question. Here’s what happened.

Kellyanne Conway:        Excuse me, excuse me, that’s been alleged. No, you need to excuse me.

Kellyanne Conway:        Weijia, I’m not dealing in hypothetical’s. Of course it’s wrong, but you can’t just make an accusation and not tell us who it is. Who is it? Come and tell us. Weijia, if you want to argue. I’m going to argue about standing away from each other and washing our hands and everything. Tell us who it is.

What’s really funny about that is Kellyanne Conway literally pulled out that old gem of, no, I, I can’t be racist. I, I have a black friend, except in this case it was the fact that her husband was 50% Filipino. So of course she couldn’t be racist against any one of Asian descent because she married someone who was of Asian descent. So that’s just ludicrous to even bring this up. But Kellyanne the reporter wasn’t saying that you said it so, so why are you suddenly getting so defensive about it, right? That that’s what doesn’t quite add up here. You know, if a staffer said this, which you’re like, well, who is it? Who’s, what’s her name? Who did this? We don’t know. Kellyanne, we just have reports coming out saying that it happened. You’re in the white house, you would likely know who it is. I mean, you’re right there in the thick of all of this every single day.

If it happened, you would probably know about it or maybe hear about it. I’m sure other employees were whispering about it loudly or if you knew it didn’t happen because you were there in the white house all the time, you would’ve said this didn’t happen. This is a made up story, yada, yada, yada. Your same old spiel. But instead you, you got very defensive and went on this bizarre rant about your husband, which wasn’t relevant to any part of the story and it kind of makes me think that it might’ve actually been you, Kellyanne. Your response there kind of makes you seem a little guilty. Not saying you are, but I’m saying it certainly does feel like that. Here’s the thing, right now, we have attacks against Asians all over the world, by the way, increasing. You know, hateful rhetoric being thrown at them, actual physical assaults happening.

And it’s because we have people out there freaking out through xenophobia thinking that all Asian people are horrible now because this virus, the outbreak began in China. Now it didn’t originate in China. As I’ve mentioned, this virus has actually been around for quite some time. It’s just never on this scale and the outbreak did apparently began in Wuhan. So that’s where it started. But that does not mean this as a Chinese creation. That does not mean that any one of Asian descent is responsible for it. But this administration’s callous words and careless words are getting people attacked and Kellyanne Conway rather than address this, rather than address it inside the white house before even talking to reporters, decided to lash out at that reporter with one of the most bizarre and self incriminating responses imaginable.