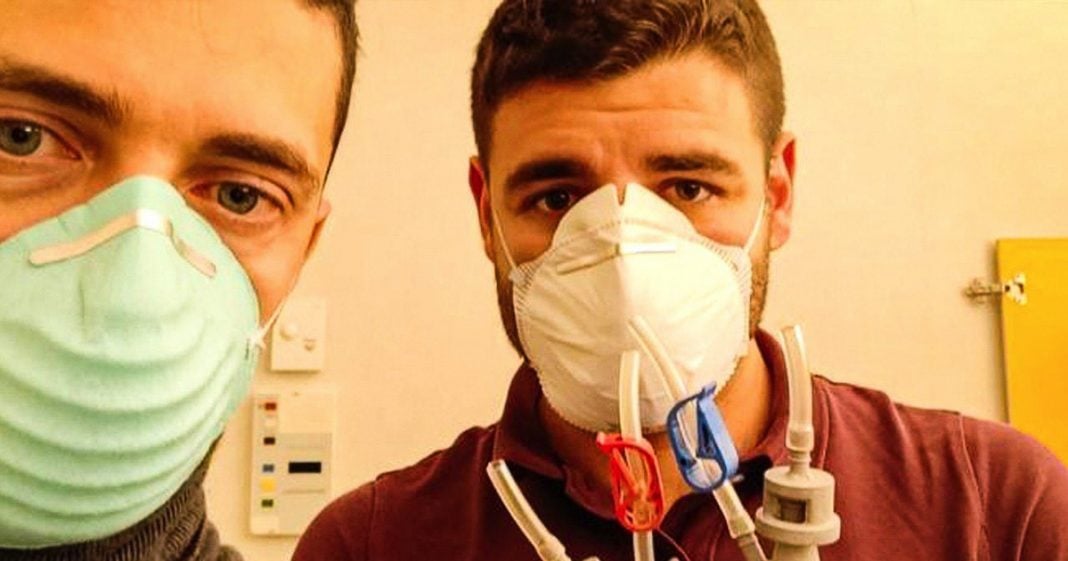 healthcare company has threatened to sue a group of Italian volunteers who are 3D printing ventilator pieces and selling them for $1 to help ease shortages that hospitals are experiencing during the pandemic. This story tells you everything that is wrong with healthcare, not just in the United States, but all over the world. More people should be doing this, as Ring of Fire’s Farron Cousins explains.

Two Italian volunteers working with a physicist over in Italy have been able to 3D print, a vital component of a ventilator that then saved 10 individual lives at a hospital in Italy. They used $1 worth of supplies to print this ventilator piece, and the reason they had to do this was because the medical device manufacturer had run out. There was a shortage. They did not have enough of these ventilator pieces to keep people alive. So they did what they had to do. They improvised. The physicist helped them to take the measurements of these ventilator pieces, able to 3D print them. They worked and they saved 10 lives and they did it for a dollar a piece. And because of that, the medical device manufacturer is now furious and threatening to sue these individuals because this healthcare company has the patent on those and you’re not allowed to print these out because we hold the patent.

And their patent, by the way, the monopoly that they have on this ventilator piece allows them to sell that piece that again, they 3D printed for $1, but it’s sold to hospitals for $11,000. So that’s a savings if my math is correct, of $10,999 per piece that these people saved. And this shows you how insane these patents and these monopolies that healthcare con, companies all over the world hold. This should not be allowed. If anything, you can hold a patent, but you can only hold it for five years after that game over. It doesn’t matter if you try to tweak it, which is what we see happen here in the United States. Healthcare companies, pharmaceutical companies, medical device companies only get to hold their patent for about 10 years after that, generics can come on the market. But if the original patent holder makes a slight tweak to it that extends their patent and no generics are available. That has to stop. Three to five years tops, maybe even less than that.

Especially given what’s happening with the healthcare system across the planet right now. But to threaten to sue these individuals because they spent $10 and saved 10 lives instead of you making over a hundred thousand dollars for a piece that you didn’t even have available. No, that’s insane. And I’ve actually spoken to several lawyers about this already and each one of them said, oh I would love to be a part of that suit on behalf of the 3D printers, that is. Not the pharmaceutical company. I don’t hang out with corporate lawyers, just plaintiff’s lawyers. So let me go ahead and send a message here. That’s what this is about. This is about sending a message, not just about this story. If you have a 3D printer, if you are somehow able to help, because here in the United States as well, we are dealing with shortages. Shortages in masks, shortages in equipment. If you are able to help in any way possible, please do it. We need it.

If something goes sideways, if something goes wrong, there are plenty, plenty of good trial lawyers in this country who are willing to have your back. And I’m talking hall of fame trial lawyers that would love to have your back if the pharmaceutical companies and the medical device companies come after you. I can’t guarantee anything, but that is based on conversations that I’ve had with them. We have to help. There are certain laws here in the United States that do allow for things like this in times of crisis and that is exactly what it is. So again, if you are able to help, if you’re able to do anything, do it. We, the public, lawyers out there, we have your back. If you can save lives for a dollar, I think it’s all within our, you know, personal responsibilities to make that happen.