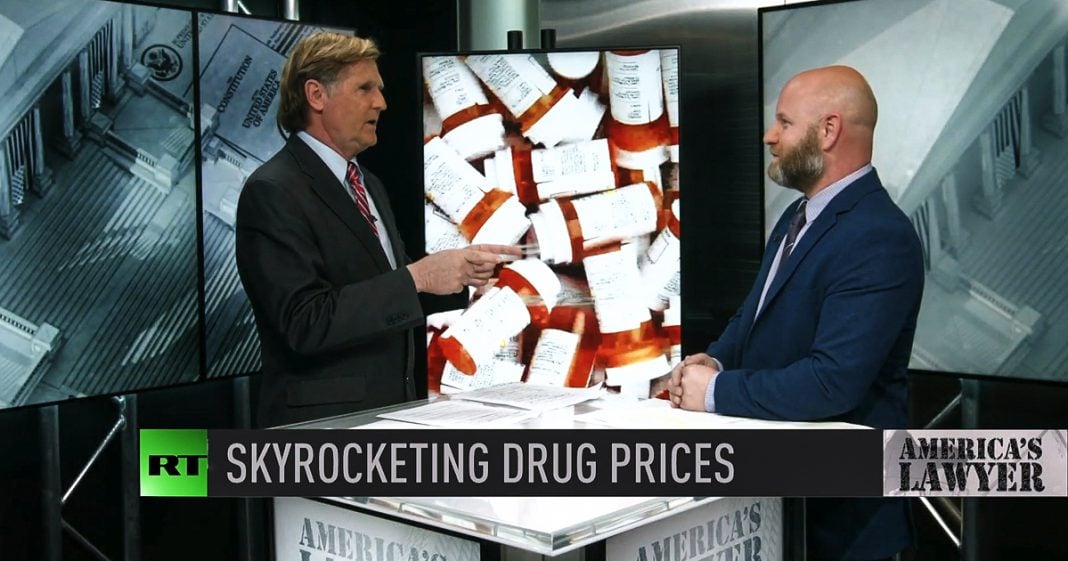 Via America’s Lawyer: Prescription drug prices have surged three times faster than the inflation rate over the past decade. Plus, Capitol Hill has introduced a bipartisan bill to hold online retailers accountable for selling counterfeit products. Mike Papantonio and Farron Cousins discuss.

Mike Papantonio:             A new report shows that drug costs have risen more than three times faster than inflation for the past decade, and so far consumers aren’t getting any relief. It’s not getting any better, and it’s not going to get better under Biden who we just talked about, nothing really changes, but these numbers frankly, are pretty startling. I mean, we’ve been doing these stories a long time.

Mike Papantonio:             And we’ve been talking about inflation, inflationary aspect of drugs and, but this, this is, this has gone crazy. 159% 159% when you can, when you take the inflation rate, compare it to everything else. That comparison is pretty ugly.

Farron Cousins:                  20,000 honestly, that’s a middle of the road number. We typically see between 10 and about 30 or 40000% markup between cost to make and sale to consumer. And so yeah, just to put that in perspective, but this number here, it’s not only that the 160% above inflation is horrible because it is, but even when you take the low income people who have the rebates, they get the coupons, they get medicine for next to nothing. Their costs still increased by 60% more than inflation. So even when you’re on these rebate programs and you are paying less than others because you’re, you know, financially unable to pay the full price, they want to charge you, you’re still getting gouged at the pharmaceutical counter.

Mike Papantonio:             Okay. Let me, let me talk about something here just a second. The viewers don’t understand. Okay. They think that this is uniquely one party that is pumping up the pharmaceutical industry, letting them get away with absolute murder, absolute murder. But the truth is it’s bi, it’s bipartisan, isn’t it? We saw it, we saw Cory Booker who was a presidential candidate. We saw a, we saw a chance of all things coming from Trump. Trump said, you know, why, why can’t we just import drugs and take advantage of drugs that come out of Canada? And, and it looked like it was gonna pass. And like at the last minute, Cory Booker goes around and he puts 16 Democrats together and they defeat it. Now, the ridiculous argument, we don’t know that the Canadian drugs are as good as ours. That was really their argument. Okay, so talk about that because people don’t get it. It’s, this is a Democrat issue, just like it’s a Republican issue. That’s why they love Biden being a contender right now.

Farron Cousins:                  Well, you know, drug companies are pretty smart with their money when they buy off politicians. They are slightly more Republican with it, but by 1% or 2%. they typically spread money evenly. So that way no matter who wins, they win and that’s what happened with Cory Booker. He’s from New Jersey. A lot of drugs are manufactured in New Jersey. That, that, those are his people. That’s who he represents and that’s who he’s going to take care of and that’s why he did this. But, you know, to say that we don’t know Canada’s testing their drugs like we do, we don’t test anymore.

Mike Papantonio:             No, we don’t test. Nor do we hold the drug companies responsible when they screw up and create a defective drug that kills people. They at least do that in Canada.

Mike Papantonio:             Major online retailers like Amazon could soon be held legally liable for selling counterfeit goods on their website. Now, okay, this story struck me this way. When it comes to money issues, okay, the Congress says, oh my God, we have counterfeiting going on and we have Wall Streeter’s that are losing money because of counterfeiting. And so we need to hold these counterfeiters responsible. They say that even at the same time that we let them sell pharmaceutical, narcotics, killing people all over the country without any regulations. We, we, human trafficking is at an all, all time high on the internet. Congress takes no action there. Give me your take on this, on this.

Farron Cousins:                  Well, it’s very interesting because obviously the internet is still the Wild West in terms of regulations. There’s nothing really there policing much of anything and honestly, the counterfeiters are a huge problem. And you have these sellers like Amazon who are letting people buy all these counterfeit goods from other countries with, you know, very lax regulations… sell it here and so yeah, that hurts American businesses. But of all the things to go ahead and tackle with the internet, you start with the one to say, oh my God, corporations are losing money. Let’s help them. No, we have people who are having their data, their location stolen from them and sold to the highest bidder every single day.

Farron Cousins:                  Right. We’re doing nothing about any of that, as you said, nothing about human trafficking or opioids or any of the other criminal activity happening on the internet. But God forbid corporations are losing a couple of dollars here and there because somebody wants to buy a knockoff watch.

Mike Papantonio:             And, and they actually, as they go forward with this, this legislation, it’s a good, it’s good legislators.

Mike Papantonio:             I mean, I’m glad they’re doing it. But for them to say this is more important, this is a lot more important than what the tech companies are doing to us, where they’re invading our lives, they’re taking everything we own as far as our identity. You name it, and then they’re selling it to some, to somebody else and, you know, Congress says, well that’s okay. This is America. That’s good capitalism. But where it comes to counterfeiting something like, you know, the, some of the stuff they’re counterfeiting it is serious. I mean, they’ve got, they’ve got some, some types of vitamins that are counterfeited. They’ve got…

Mike Papantonio:             Baby formula. It’s, that’s true. They need to do something about that. But they need to handle this in a way that we can look at and say, you know, they’re kind of doing this with an even hand. They’re holding the tech companies responsible for all the bad things that they’re responsible for right now.

Farron Cousins:                  Right, and what we need, honestly at this point, we need a new government agency. We need somebody in a department overlooking the internet these days. That, that’s what needs to happen. We need to have broad regulations, not just to make sure the internet is being fair, but to also protect the companies as well. We got to take care of them. But there is so much happening, so much that Congress is overlooking, for them to prioritize the profits of these companies and it’s because they give them money for their campaigns. It really kind of stings a bit as a consumer because I’ve had my data stolen, you know, and nobody, nobody’s doing anything about that.