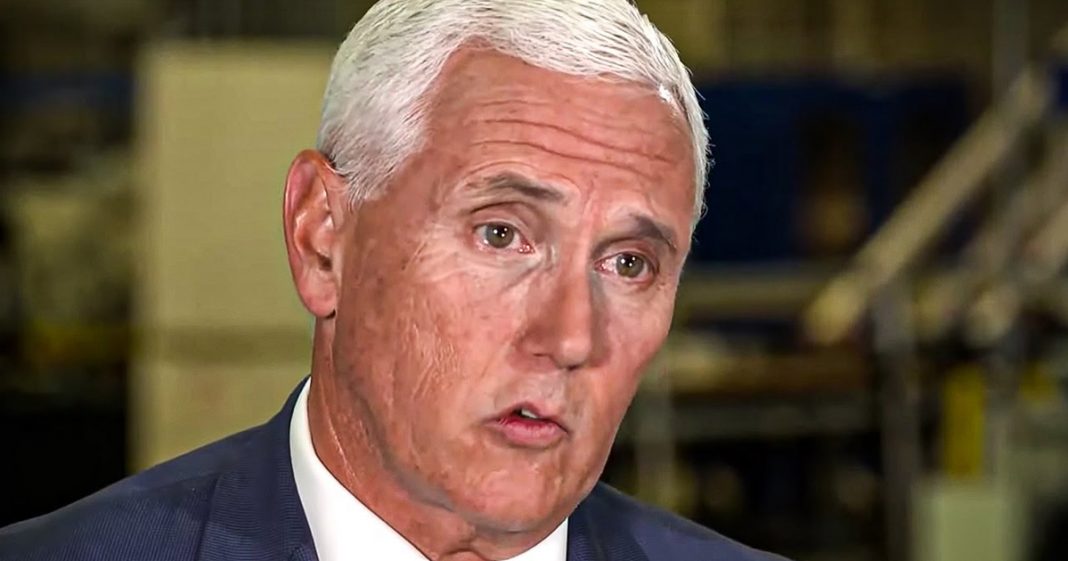 According to reports, Mike Pence has been meeting in secret with right wing media personalities to get their opinions on how the White House should spin the crisis. This is further proof that the White House does not care about the safety of the American people, they only care about their image and their chances of reelection. Ring of Fire’s Farron Cousins explains what’s happening.

According to a new report from the Daily Beast, Mike Pence has been meeting with right wing personalities, media hosts and influencers on social media to try to help massage the message a little bit about the Trump administration’s response to the coronavirus pandemic. Now, here’s the weird thing about this. This wasn’t an afterthought. This wasn’t, okay, well now it’s been a couple of weeks. We need to go out there and start meeting with these people. Get the word out. Mike Pence started meeting with these folks the day after Donald Trump appointed him to head up the coronavirus task force. The very first thing he did was go out there and reach out to right wing media folks and right wing social media folks and say, how can we spin this? How can we make us look better? That’s what’s happening here. Now, according to the Daily Beast, this actually began even before that at CPAC.

There was a little meeting that they all attended where they talked about how to massage the message, how to kind of whitewash things, how to make things really look so much better than they are. And then again, once Pence was appointed, first thing he does, he goes out, he holds the meeting, a meeting the next day. Then the next day holds another meeting with these folks and essentially they exchange talking points, explained to the White House how they have a massive PR crisis on their hands and how they could fix it. Some of the folks who have attended these meetings, according to Daily Beast, Fox news fixture and prolific MAGA tweeter, Dan Bongino, former Trump advisor and current war room 2020 podcast host, Jason Miller, Newsmax TV host and Trump’s former press secretary Sean Spicer, former White House official and Sinclair must run commentator Boris Epshteyn, Sinclair anchor and ex Fox news host Eric Bolling and former representative Jack Kingston from Georgia who is also a Trump surrogate.

They also met with multiple MAGA folks who have massive Twitter followings or massive YouTube followings trying to get them to go out there and spread the good word about how awesome the Trump administration is doing in handling this crisis. And folks, if you had any doubt that the Trump administration doesn’t care about human beings, this should have gone ahead and confirmed that no, they don’t care about human beings. All they care about is the PR, the public relations side of this. They don’t want people to lose faith in Donald Trump. Even though people left and right are losing faith in Donald Trump. They don’t trust him. They don’t think he’s doing a good job with this. They don’t think he can do a good job with this and that’s what the White House wants to fix. They don’t want to necessarily stop the spread of the pandemic. That, that doesn’t seem to be the big concern there.

It’s just, wow, I don’t want people to think I’m a moron and that’s what they’re concerned about. That’s what they’re actually out there working on. In fact, Mike Pence’s chief of staff, Marc Short, actually defended these meetings. So he admitted that they happened. This is not, you know, a conspiracy. There’s, these meetings are actually happening. But anyway, Short goes out there and tells the media outlets that, well, you know, we’re doing this because we just want to get the word out to as many people as possible, as fast as possible. You know, it’s not, it’s not white washing. It’s not propaganda. It’s just because like if we need them to tweet something out, they’re going to go out and do it. So that helps get information out to the public. That’s a lie. That is an absolute lie because let me tell you how a lot of these right wing media personalities operate on Twitter, and I know this from experience because if you ever say one thing critical about them, or even if you’ve never spoken to them at all or tweeted about them or mentioned them on Twitter, they’re going to block you.

I know that because I’m blocked by Dan Bongino and I had never, before I was blocked, ever said a word about Dan Bongino on social media, in a video here, or even in my private life, had never uttered his name only to find out on a block. So how does that work if Dan Bongino is part of the rapid response team yet I can’t see what he has to say? So I’m just screwed because he’s got a grudge against me for some reason? Same thing with all of these other little weasels out there on social media, but this isn’t about spreading important messages about testing centers. This is about white washing the Trump administration’s ridiculous response to this pandemic. It’s about making people think that they’re not as inept as they actually are and luckily, since this has been going on since February, the public isn’t buying it. They know that we’ve got two morons, Beavis and Butthead in Pence and Trump running this whole thing. They’re not happy about it and they know it’s not working. So no amount of right-wing propaganda at this point, as they watch this virus spread, is going to convince them otherwise.