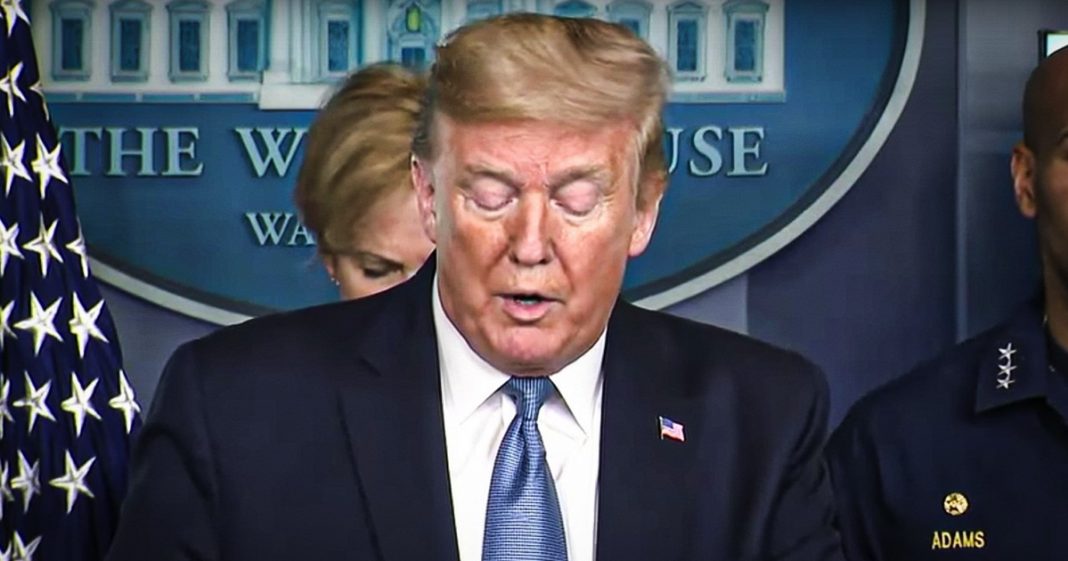 During a press conference on Monday, Donald Trump says that his response to the outbreak in the United States has been a perfect 10 out of 10, meaning he believes that he’s been completely perfect throughout this whole thing. The truth is that his response and his incompetence have caused this thing to grow out of control, and the country is on track to suffer tremendously for months. Ring of Fire’s Farron Cousins discusses this.

As the stock market was having its worst day since 1987 losing almost 3000 points, Donald Trump decided to give a press conference to ease the public’s fear about the growing pandemic and at first it seemed he was actually given some decent advice. Right? You know, do not congregate in groups larger than 10. Avoid going out if it’s not absolutely necessary. You know, things doctors have been saying, Donald Trump has now finally realized, hey, I should probably tell people this too. But then during a little bit of Q and A session, a very much defeated Donald Trump took a question and answered it with an absolute lie about how well he has responded to this crisis. Here’s what happened.

You’re classifying the meetings that you’re having at the White House over the issue, hiding information from the public. Trying to monopolize a vaccine, trying to monopolize medical care. Telling governors just yesterday, you’re on your own trying to go out and find supplies. And you’re really going to sit there and dejectedly give yourself a 10 out of 10? Come on. Even we know, I think even the most ardent MAGA supporters out there know this hasn’t been a 10 out of 10. You’ve done horribly. You could fix things. You could, well, I dunno if you can at this point, but you could certainly try, but you’re not even willing to do that. You know, the mark of a great leader is that they’re willing to admit when they’ve made a mistake and they do everything they can to right the ship. But that is not what Donald Trump is doing right now.

He is still, even yesterday in that call with governors that he had where he told them you’re on your own. He goes off and starts blaming Obama for the whole thing. Obama’s the one who, you know, made our, our disaster response so horrible. It was broken very badly when I took over is what he said. But, you know, we’ve, we’ve fixed it. No, you haven’t. You disbanded the pandemic team two years ago and you’ve lied about doing that. But now a video clip has resurfaced where you’re talking about the fact that you did it negating your lie that, oh, I didn’t know anything about that. You did it, man. Own it. Own up to it because I could promise you, if you don’t, you will not get reelected in 2020. But of course, that is what we want, right? But we also don’t want people to get sick and die. This is bigger than politics. This is bigger than elections. We need the president to act competently. It is not worth a single American life to get this man out of office. I’m sorry, but it’s not. We need a president with a fully functional brain. We need one that understands the severity of what’s happening and I don’t think Trump’s ever going to be able to rise to that occasion.