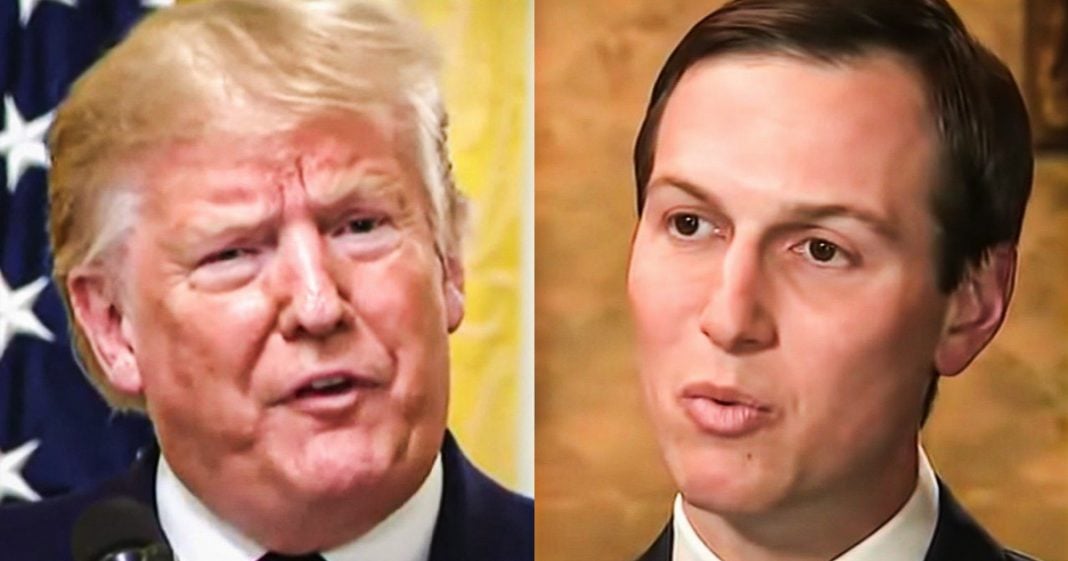 According to new reports, Jared Kushner was the one who managed to convince Donald Trump that the coronavirus wasn’t a big deal and that the media was overhyping the situation. And Trump isn’t happy. According to reports Trump is “furious” at Jared for misleading him about the situation. But in fairness, if you trust Jared Kushner on any issue then you’re going to be let down. Ring of Fire’s Farron Cousins discusses this.

According to a new report from the New York Times, the reason Donald Trump’s coronavirus response has been so horrible and the reason he waited so long to do anything about it is because he took the advice of Jared Kushner. Yes, noted medical expert, Jared Kushner, told the president not that long ago, that this whole virus thing wasn’t a big deal. It’s going to blow over. The media is over hyping it was the official advice that Jared Kushner, Ivanka Trump’s husband, gave to Donald Trump, the president of the United States. Jared Kushner said it wasn’t a big deal, and so Donald Trump then went out on national television a couple of weeks ago and said, it’s not a big deal. Everything’s going to be fine. You got nothing to worry about. Thanks for the advice Jared and then all hell broke loose. The stock market hit rock bottom. Americans started dying, the virus started spreading. Cities started canceling school.

Now we have states closing down bars, restaurants, wineries. Being told to not gather in groups larger than 10 and throughout all of this, some of which Trump has even come out and said himself now, because I guess now he’s willing to admit it’s a problem. He has been fuming behind the scenes according to people in the White House, at Jared Kushner. One of them said, I have never heard so many people inside the White House openly discuss how pissed Trump is at Jared. He’s mad, he’s angry. He is furious at the fact that Jared Kushner gave him this horrid advice and quite possibly caused all of these delays in testing, in ordering equipment and all of these things that are going to end up getting people killed. Trump is furious that Jared Kushner did this, but I gotta be honest that anger should not be directed at Jared Kushner. That anger should be directed at anyone. stupid enough to think Jared Kushner has a thought in his head.

Yes I am sorry Donald Trump, but if you think Jared Kushner is ever going to give you good advice about literally anything, you’re mistaken. This kid has no business whatsoever even being in your administration. If he wasn’t sleeping with your daughter, he wouldn’t be. But that’s why you picked him. You picked him because Ivanka came up to you and said, daddy, what about Jared? That’s why this man even has a job. He is a crook. He is absolutely corrupt to his core, and he is dumber than a box of hammers and you made the idiotic decision to listen to this moron and people have died as a result of it. Jared Kushner needs to be removed from this administration just as much as Donald Trump himself does because if Kushner stays, and he continues to have the ear of the president and give him such horrid advice, this country is absolutely screwed.